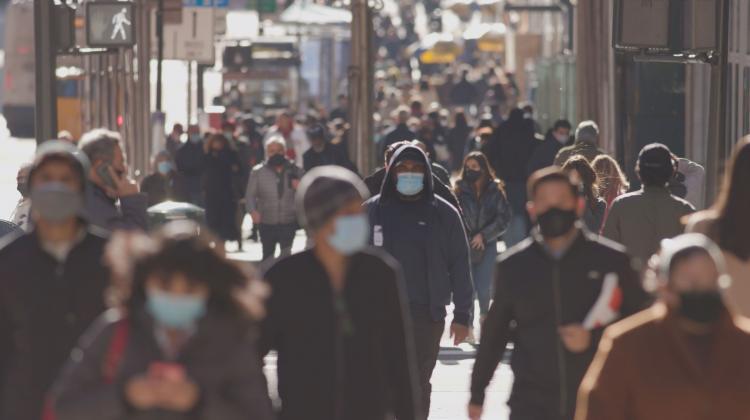 Immigrants and ethnic minorities are being stigmatised by COVID-19, say scientists from the University of Warsaw.

The researchers found that because worldwide the death rate from COVID-19 is disproportionately higher among indigenous peoples, a form of 'COVID-stigma' had emerged.

In a press release, the Foundation for Polish Science said: “This is probably related to the lifestyle of these people, high density, poverty, worse access to medical care and the lack of reliable information on the pandemic in the languages of these groups.”

It added that the pandemic is associated with the faster dying of the oldest generations, and therefore takes the group of the highest value for cultural survival, the group that is the reservoir and transmitter of language and tradition.

But that is just one of the many threats to minority groups posed by the pandemic.

At the beginning of 2020, the World Health Organization noticed that minority groups were experiencing increased discrimination and stigmatisation from majority communities in connection with the COVID-19 pandemic.

Accused of posing an epidemic threat, members of national and ethnic minorities are particularly vulnerable to the negative consequences of the pandemic such as stress, anxiety and depression.

Initial research results confirmed that the pandemic exacerbated discriminatory behaviour and stigma, as well as social and health inequalities, leading to a deterioration of the psychological well-being of minority groups.

Dr. Michał Bilewicz from the team investigating COVID-stigma said: “We have analysed the results of online surveys among Silesians, Kashubians and indigenous groups in Mexico. They support our argument that members of minority groups and migrants are blamed for creating an epidemic threat to majority groups.”

He added that the increasing discriminatory behaviour, including manifestations of aggression and the deteriorating situation in the labour market and the loss of income, have negative psychological effects. And the stigma associated with the coronavirus leads to increased anxiety among minority groups and a generally diminished mental health.

Bilewicz said: “Research results also indicate that the pandemic has strengthened ties within ethnic groups. Strong relationships within communities are one of the mechanisms of coping with an external threat. However, strong trust towards members of one's group is accompanied by distrust towards public institutions, such as the government, sanitary services and the police.”

The researchers also found that the responses of various groups to the current pandemic are influenced by the intergenerational historical trauma related to marginalisation and persecution in the past, loss of land and language, as well as previous epidemics that, like in Mexico, have repeatedly decimated indigenous communities.

People who experience such prior or intergenerational trauma show a higher level of anxiety and stress related to the current pandemic situation, feel more stigmatised and therefore seek support and protection within their group.

Team member Dr. Justyna Olko said: “At the same time, however, our research shows that minority groups are less susceptible to irrational conspiracy theories compared to the majority community.”

She added that awareness of their own history and memory of previous disasters allow these groups to better assess the effects of such threats as the pandemic, not only for individuals, but also in a broader context, for the whole group. “This historical awareness makes these people behave more rationally, show greater caution towards the threat and protect themselves more,” she said.

In the course of further work, scientists will attempt to determine the scale of the stigma and, as a result, develop a set of easy-to-implement strategies for dealing with current and potential future epidemic crises. This package will include guidelines for government agencies, local governments, NGOs and companies that employ migrants and members of ethnic minorities. As part of the project, the researchers are also carrying out an information campaign among indigenous communities in Mexico in their own languages and involving local activists. Its aim is to raise awareness of health hazards and to promote protective behaviour.

Dr. Olko said: “We are convinced that the results of our work will be useful not only for immigrants and members of minority groups, but also for the broader society. They will help build better relations with minorities and stigmatised groups, and consequently develop social capital.”

The project is co-financed by the Foundation for Polish Science under the TEAM programme from European funds (the Smart Growth Operational Programme).

For the research project, scheduled to continue until spring 2022, the scientists received additional funds from the TEAM programme in the amount of PLN 500,000. The funds were awarded by the Foundation for Polish Science in a thematic competition for funding new research tasks related to the COVID-19 pandemic.