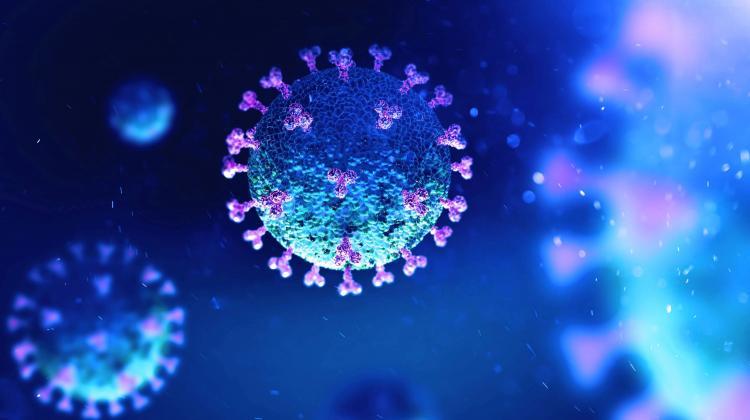 A team from the Warsaw University of Technology has been working on a biotechnological vaccine against COVID-19, which is now ready to be tested on animals.

And for team leader Professor Tomasz Ciach at the Faculty of Chemical Engineering of the Warsaw University of Technology, it’s personal: “An invention or discovery is like a promise to solve a problem, you have to try to fulfil your promises. I would like to do something that will help the sick. I lost many people during the pandemic,” he said.

Despite much needed additional funding, the team has now produced purified coronavirus spike protein which the body should be able to produce an immune response to.

“The virus was not needed to develop a vaccine, we relied on its genetic code and tried to select the fragments with the slowest mutation rate.

"The virus spike proteins we produce can also be used in the production of tests for the presence of antibodies against the COVID-19 virus in the blood.”

He added: “There is still room for new vaccines on the market as access to foreign-made vaccines is not guaranteed. Part of Asia and Africa still cannot count on access to vaccinations, so this problem is still not solved.”

According to Ciach, another reason for domestic vaccine production technology is because it is not known how long the current COVID-19 vaccines will remain effective. It may turn out that, as in the case of flu, vaccinations will have to be renewed from time to time. And constant access to a domestic vaccine will provide huge security and savings.

He said: “Unfortunately, I am afraid that new pathogens will attack people on a regular basis, because the current food production model is based on large livestock farms, where different species of animals are kept together in a small area. If Europe wants to be safe, it must have many laboratories capable of rapidly developing and producing vaccines.”

The E. coli bacteria used in the production of spike proteins are present in the human digestive system and it is a model organism scientists know well. Globally these bacteria are used as small bioreactors - living machines that produce pre-programmed proteins. E. coli bacteria are used for the production of insulin, other hormones and protein drugs. The programmed proteins produced by the bacteria are carefully separated from all other substances, so there is no risk that any unwanted compounds will be delivered to the body.

If we add an adjuvant, for example aluminium salts or squalene (found in shark liver fat), the basis for the vaccine will be largely ready. The Warsaw University of Technology researchers now want to start testing the effectiveness and safety of such a solution soon.

The Polish team will simultaneously develop the nanovaccine idea that would eliminate the need for an adjuvant. Professor Ciach said: “In further research, we want to prepare an iron oxide nanoparticle, which we will decorate with these spike proteins.”

For now, the scientists will create a mock-up of the coronavirus - a nanoparticle with a diameter of 100 nm that will roughly look like the coronavirus. It will have spike proteins, but it will no longer contain organic substances. Ciach said: “Unlike a virus, such a nanoparticle cannot be multiplied in the body because it will not contain any genetic code.”

Iron oxide, which scientists will enclose with spike proteins, is a well-studied substance that easily disintegrates in the body (used, for example, in iron deficiency). The researchers hope that such an 'iron mock-up' of the virus will more effectively trigger the body's immune response than a protein in combination with an adjuvant.

Ciach said: “To sum up, in our research we selected and created the genetic code of coronavirus spike fragments. We introduced it into bacteria that produce spike proteins. These proteins - in combination with an adjuvant - can themselves form the basis for vaccine production. But we will also conduct further research to obtain a nanotechnology vaccine, a virus mock-up, for which an adjuvant will no longer be needed.”