‘Anti-eavesdropping’ entangled photons being developed by Military University of Technology 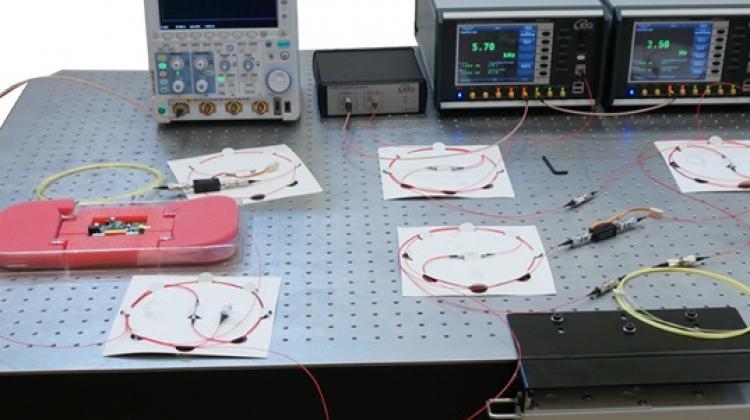 A new method for preventing 'eavesdropping' on information sent via a fibre optic cable without immediately getting caught is being developed by the Military University of Technology in Warsaw.

The entangled state generator is Poland’s contribution to the work on safe quantum communication based on the phenomenon of photon entanglement.

If fibre optics are not secured in advance, in the age of quantum computers it would be easy to take over banking information, spy on stock market transactions, intercept political communication or confidential military orders. Currently, optical fibres are safe. This will continue until a quantum computer is created and decodes the encryption keys in a matter of hours, doing calculations that would now take years for devices to complete.

Dr. Marek Życzkowski from the Institute of Optoelectronics at the Military University of Technology said: “Considering that such a hostile data takeover may, for example, shut down power plants and deprive us of basic living resources, the entire state may be threatened. All the more important are the tasks for us, scientists working on quantum communication.”

Quantum communication will use light quanta that have a very special property: the state of entanglement. Entanglement causes each pair of photons to behave identically, regardless of the distance between them.

Życzkowski said: “The entangled state generator will enable the development of such photons. Hypothetically, one of the entangled photons could be sent to the Moon and the other to you neighbour. If you neighbour changes the state of his photon, the photon on the Moon will change its state to an identical state at the same moment. If we consider the first state to be one and the second to be bit zero, then we can key the information by manipulating subsequent entangled photons.”

The security of such transmission is based on the fundamental laws of physics. If the eavesdropper detects the state of the receiver's photon, its state will be disrupted immediately. The fact of such a change is immediately seen by both the sender and the recipient. It will be possible to detect an attack on a telecommunications channel with simple optical operations.

Scientists around the world are working on obtaining pairs of entangled photons. The first entangled state generators already exist, but they are based on technologies that are difficult to use. They require cooling to very low temperatures and a vacuum to transport photons.

According to Życzkowski, however, the new generator “will work at room temperature. In addition, the generated pair of entangled photons can be introduced into an ordinary telecommunications fibre.”

For now, the researcher cannot reveal when the generator can be used in practice, but aded that such devices and technologies will appear in the next 10 years. In the beginning, their recipients will be states, including specially designated secret networks, for example, military and financial ones. Then, they will be used by telecommunications companies, critical infrastructure and public offices.

Currently, the team of optoelectronics experts from the Military University of Technology is working on building a quantum exchange key in optical fibres without the effect of photon entanglement. Work is underway to secure the telecommunications paths in the future.

Scientists have already developed their own quantum code key generation and exchange devices and are working on improving them. This will help to build a secure national telecommunications network. Such data exchange will enable protection against attacks on optical fibres.

But any optical fibre user is at risk of attack. Any type of data that criminals deem valuable can be hacked. Especially at the institutional level, there will be huge problems with secure communication if countries do not take care of securing optical fibres.

Most users are convinced of the unconditional security of data transmission in optical fibres as the optical fibre does not emit any wave to the outside, and the transmission is encrypted. But in the future, the current code encryption keys will be insufficient.

Currently, anyone can tap into the fibre optic cable at any point with a suitable light-draining device and receive a stream of encrypted data without arousing suspicions.

But they would not be able to read the data, because they would not decode the encryption keys. Now, for the best classic computer devices, such calculations would take several years.

However, there are currently no or few technical measures to protect the information travelling in optical fibres from a potential quantum computer attack.