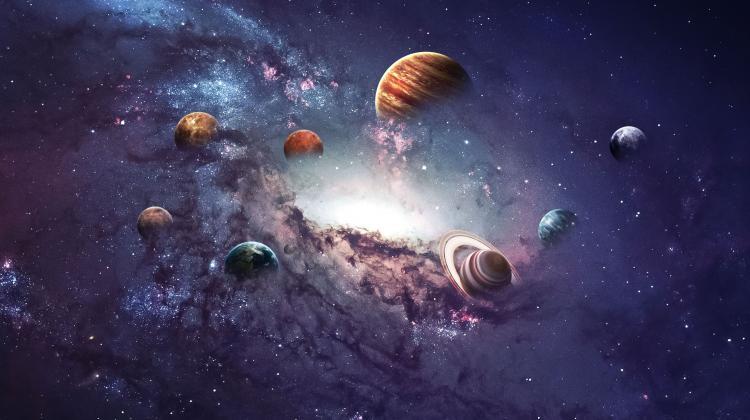 An international team of scientists has come up with a new theory about how the Solar System was formed.

According to the theory put forward in the latest issue of the journal Science, our planetary system could have formed in two steps, contrary to the currently accepted view.

Traditionally, it was thought that the formation of the Solar System, the Sun and the planetary system were formed from a thickened gas cloud collapsed by gravity. The shrinkage of the cloud caused an increase in density and the formation of a rotating protoplanetary disk.

An important element in these processes could be the snow line that separated the areas where gaseous substances were present in the disk (closer to the star) and the area where the water transformed into ice (further away from the star).

Geochemical and astronomical evidence indicates that planet formation occurred in two separate zones. The exact reason for this variation is unknown: why planets close to the Sun are small and dry (with little water in relation to their mass), and why planets in the outer Solar System are larger and wetter.

According to the authors, planetesimals could be formed in two separate steps. Numerical calculations and observations indicate that the places where planets form may have relatively low levels of turbulence. Under such conditions, the interaction between the dust grains in the disk and the water passing from the gas to the ice phase (snow line) could induce an early period of planetesimals formation, and then a second wave of planetesimals formation could later occur, but at a greater distance.

Co-author of the research, Dr. Joanna Drążkowska at the Ludwig Maximilian University of Munich, Germany, said: “Our research sheds new light on the process of planet formation. The old theory could not explain the key first step, in which dust forms the first gravitationally bound bodies, or planetesimals, so it simply assumed that they were formed quickly everywhere in the circumstellar disk.

“We are using the latest developments in theoretical research that suggest that planetesimals can only form (through a process called streaming instability) in certain places, such as the snow line.”

According to Drążkowska, in this scenario, all plantosimals are formed rich in water, but a small part of them is formed so quickly that it is rich in the radioactive aluminium isotope Al-26 with a half-life of 700,000 years, shorter than the lifetime of a circumstellar disk . Due to the decay of aluminium, some planetesimals lose water and become the seeds of rocky planets.

She added: “One of the most interesting implications of this study is that other planetary systems may look completely different from the Solar System (we know from exoplanet studies that this is the case) just because they originally had a different Al-26 budget, which I think is a very natural and elegant explanation.”

Co-author of the research paper was Professor Gregor Golabek from the University of Bayreuth in Germany.