Caves are great repositories of data about the past, says speleologist 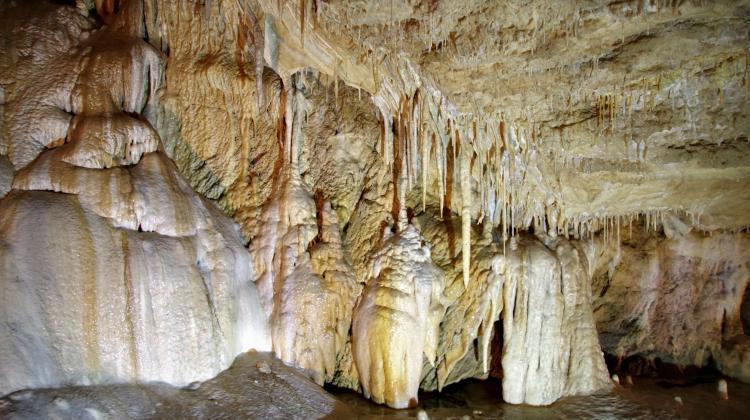 Animal remains are well preserved in caves, making it possible to study fossil DNA, and cave formations tell us how the climate was changing in the past, says speleologist Dr. Michał Gradziński from the Jagiellonian University.

2021 is the International Year of Caves and Karst. To mark the event, the speleology section of the Polish Copernicus Society of Naturalists is preparing a series of webinars. The guest of the first of them is speleologist Dr. Gradziński.`

WHAT IS LEFT TO STUDY IN CAVES?

At the very least, caves are an important source of palaeoclimate research data. For example, some cave formations are relatively easy to date. And because they crystallize relatively slowly and fairly evenly, on the order of centimetres per hundreds or thousands of years, they provide information about how the conditions in a given place were changing in the past.

This allows scientists to study trends in temperature, vegetation and the circulation of atmospheric masses. And if the mechanisms of climate change in the past are known, it is possible to more precisely forecast how the climate will change in the future.

Another trend in cave science is the study of fauna remains in cave deposits.

Dr. Gradziński says: “In the past, attention was paid only to the bones of large animals, and now it turns out that the bones of small vertebrates are no less interesting material for research

“There is a constant temperature in the caves, which is conducive to DNA preservation. It does not break down there.”

HOW A DROP DRILLS THE ROCK

Most caves, including the largest ones, are formed in the karst processes, which involves rock dissolution. Gypsum, salt or limestone are susceptible to dissolution. While gypsum and salt simply dissolve in water, in the case of calcium carbonate (the building block of limestone), a chemical reaction takes place, which requires water. And the rate of this reaction depends on how much carbon dioxide is dissolved in the water.

“The increasing concentration of carbon dioxide in the atmosphere will certainly have an impact on the faster dissolution rate of carbonate rocks,” says Dr. Gradziński. This does not mean, however, that the caves will appear at a rate noticeable to humans. If we assume that a cave, according to the definition, is a space accessible to humans, and therefore has a size of at least several dozen cm, the formation of karst caves takes thousands of years', says the speleologist.

In Poland, the largest karst caves are in the Tatra Mountains. These caves are not only large and deep, but often also still active: streams flow in some of them and continue to wash the rock. The process of cave formation is not finished there yet.

Karst caves also exist in the Kraków-Częstochowa Upland, but their glory days are long over. Only fragments of old, large caves remain. “Soon, on a geological scale of course, surface erosion will completely destroy them,” says Dr. Gradziński, adding that the rock windows that can be admired in Ojców National Park are the remains of an old cave that was cut by surface erosion.

Karst caves are also found in the Świętokrzyskie Mountains and the Sudetes. One of them is the Bear Cave in Kletno, which is the longest cave in Poland outside the Tatra Mountains, while Nida Basin is the only area in Poland where there are caves in gypsum rocks.

In turn, in the so-called Outer Carpathians (the Beskids in the geographical terminology), we are no longer dealing with karst caves, but with caves of a different type: erosional caves. Caves of this type are formed as a result of the instability of slopes, expansion of previously existing cracks in the rocks, displacements in mass movements.

Dr. Gradziński's SPELEO-WEBINAR lecture 'What caves are and why are they interesting' can be watched on Wednesday, January 27 at 7 pm on YouTube. For details, visit http://speleo.ptpk.org