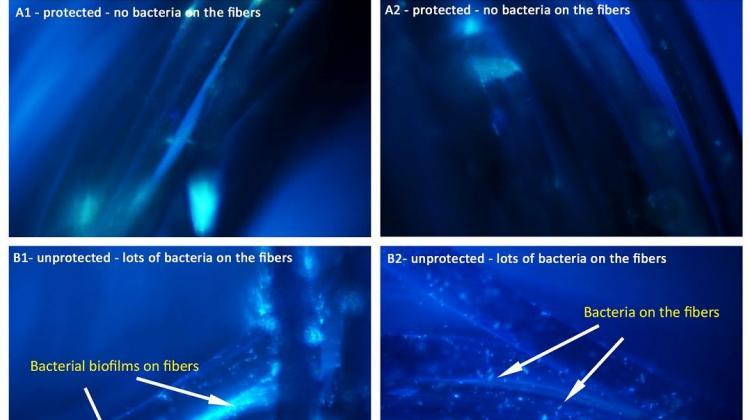 Aquatic surfaces such as wetsuits could get protection from pathogenic bacteria after scientists at the University of Warsaw found that substances secreted by algae deter them.

In countries where where even in summer the days can be cloudy, cold and rainy, there is a problem with drying and maintaining water sports clothing and accessories.

The researcher's work may contribute to the creation of a preparation to protect such surfaces (for example materials used to make wetsuits and water sports footwear) against the deposition of bacteria on them.

Pathogenic bacteria are often identified in biofilms. Their presence is considered a negative factor, in part because many species of these bacteria produce and release toxins. Dr. Kiersztyn noticed that while bacterial biofilms form very quickly in the natural aquatic environment, they are do not form efficiently on the surface of living unicellular algae.

He said: “It is a very interesting phenomenon. While bacteria are able to quickly colonize practically any surface in water, colonization on unicellular algae is almost non-existent. Bacteria refrain from colonizing live microscopic algae: they do not settle on them intensively and do not multiply on their surfaces. Microscopic, biochemical and molecular observations clearly indicate this.”

In his experiments, Dr. Kiersztyn found that one of the causes of this phenomenon is a substance secreted by algae in the process of photorespiration. It turns out that the microconcentration gradient of the substance is enough to prevent bacteria from intensively settling on a given surface in the water environment. This was the source of the idea to create a preparation that would protect various types of surfaces, including clothes and other accessories that come in contact with water, from the formation of bacterial biofilms on them.

Several factors speak in favour of the economic benefit of such a solution. The first is the low price, because the natural substance produced by algae is extremely inexpensive in industrial production. The possibility of using microconcentrations additionally makes the preparation itself cheap to produce, which would give its manufacturer a chance to generate a considerable margin. In addition, the preparation would be based on a substance found in the natural environment, and its action would not be to eliminate bacteria (which would involve the risk of releasing toxins from them), but to deter them.

The experiments conducted on the materials used to manufacture diving wetsuits and water sports footwear clearly confirm that water bacteria are deposited only to a minimal extent on sports clothing sprayed with a solution containing the discovered substance. Some of the experiments were conducted in a natural environment in Lake Śniardwy, in a specially selected area rich in many bacterial strains.

Marta Majewska who runs this project said: “The discovery has already been covered by patent protection in Poland. We are currently looking for an investor or industry partner who would introduce this effective protective preparation to the market under their own brand.

“As production, even on a large industrial scale, is extremely inexpensive, and at the same time the technological process appears to be very simple, this invention has a chance to be quickly absorbed by the manufacturer and implemented without incurring significant expenditures.”