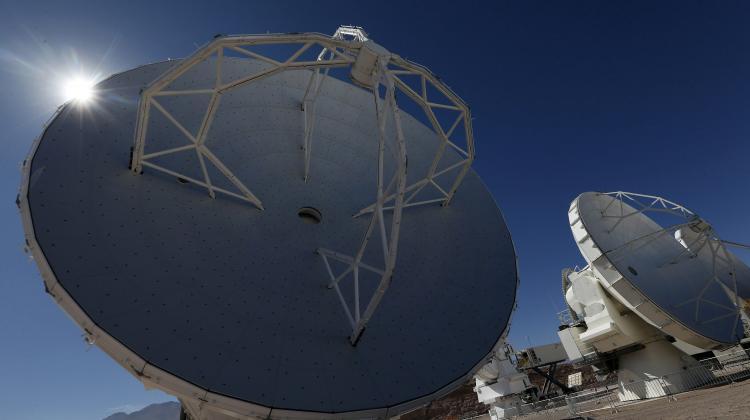 Scientists have shed new light on the physical processes involved in the formation of dust, metals and stars in galaxy evolution after studying 300 distant, dusty galaxies.

Two billion years after the Big Bang, the Universe was still very young. But thousands of huge galaxies, rich in stars and dust, had already formed.

To find out how, an international study by the International School for Advanced Studies (SISSA) in Trieste and the National Centre for Nuclear Research along with an international team of scientists combined observational and theoretical methods to identify the physical processes behind their evolution.

Using the Atacama Large Millimeter/submillimeter Array (ALMA), they found evidence of a rapid increase in dust levels due to high metal concentrations in the distant Universe.

Darko Donevski, postdoctoral fellow at SISSA, said: “On hand, they are difficult to detect because they reside in dense regions of the distant Universe and contain dusty particles which absorb most of the optical light radiated by young stars.

“On the other hand, many of these dusty 'giants' were formed when the Universe was very young, sometimes even less than 1 billion years old, and scientists have been wondering how such a large amount of dust could have been produced so early in time.”

The ALMA interferometer in the Atacama Desert of northern Chile consists of 66 telescopes and is able to detect the infrared light that penetrates the dusty clouds, revealing the presence of newly forming stars.

Donevski said: “For many years scientists thought that production of cosmic dust was exclusively due to supernovae explosion. However, recent theoretical works suggest that dust can also grow through collisions of particles of cold, metal-rich gas which fills the galaxies.”

Dr. Katarzyna Małek, assistant professor at the Astrophysics Department of the National Centre for Nuclear Research, added: “We determined the physical properties of our galaxies using a special modelling technique for their broadband energy spectra.

“This is an important source of information about the nature of galaxies, as many of the complex physical processes that take place within them leave traces in their spectrum.

“The energy spectrum, i.e. the dependence of the radiated energy on the wavelength, is like a galaxy DNA. Modelling the energy spectra helps us estimate physical quantities such as the mass of dust or the mass of stars in a galaxy.

“Thanks to the analysis of broadband spectra, we were able to identify two different populations of galaxies in our sample: typical star-forming galaxies called main sequence galaxies, and extreme objects called starburst galaxies.

“Such an extreme galaxy creates stars with a combined mass of up to 10-100 solar masses each year.”

Donevski continued: “We found a huge amount of dust mass in most of our galaxies. Our estimates showed that supernovae explosions could not be responsible for all of it and a part had to be produced through particle collisions in the gaseous metal-rich environment around massive stars, as previously supposed by theoretical models.

“This is the first time that observational data support the existence of both production mechanisms.”

Scientists also looked at dust to star mass ratio over time to study how efficiently galaxies create and destroy dust during their evolution.

“Interestingly, we also showed that irrespective of their distance, stellar mass or size, compact starburst galaxies always have dust-to-stellar mass ratio higher than the normal galaxies."

To fully evaluate the observational findings, the team of astronomers also tested their data with the latest galaxy simulations and models. Using a new suite called SIMBA that simulates the formation and evolution of millions of galaxies since the beginning of the Universe to present time, they tracked all their physical properties, including dust mass.

Desika Narayanan, professor of astronomy at the University of Florida and member of the DAWN institute in Copenhagen said: “Up to now, theoretical models had problems in matching both galaxy dust and stellar properties simultaneously. However, our new cosmological simulation suite, SIMBA, could reproduce most of the observed data.

“Our study shows that dust production in +giants+ is dominated by the very rapid growth of particles through their collisions with gas.

“Thus, it provides the first strong proof that dust formation occurs both during stars’ death and in the space between these massive stars, as assumed from theoretical studies. Moreover, it offers a new mixed approach to investigate the evolution of massive objects in the distant Universe that will be tested with future space telescopes such as the James Webb Space Telescope.”