Human rubbish a global problem for small and large animals 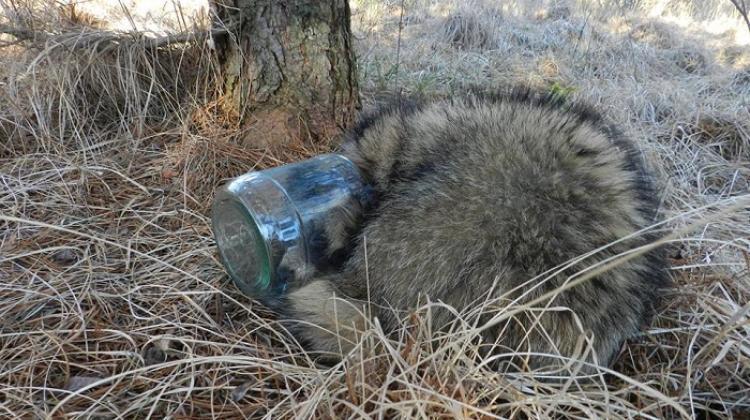 Invertebrates, birds, fish, amphibians, reptiles and mammals including raccoons, dogs and cats are dying because of rubbish and debris left by humans.

The most common traps are drinks and food jars and cans, according to a summary presented by scientists from the University of Wrocław.

Littering is a huge environmental problem that affects almost every corner of the Earth. Many animals have not yet developed an appropriate response to contact with anthropogenic materials and often mistake them for food, nest material or even a partner. As a consequence, animals die from getting entangled in lines or starvation, with their stomachs filled with waste, points out Dr. Krzysztof Kolenda from the University of Wrocław.

He points out that the effects of food and drink containers on animals has been much less studied. Although they are among the rubbish most often found in the environment, the scientific literature devotes little space to this problem. Most papers concern the mortality of mammals that, after entering the container, were unable to leave it. On the other hand, only individual reports suggest that it is insects attracted by, for example, leftover drinks, that die in containers in the greatest numbers.

From time to time, photos and videos of animals stuck in various containers appear on the Internet, recently a roe deer from Wrocław and a bear from the Slovak part of the Tatra Mountains.

Dr. Kolenda and a group of scientists from the University of Wrocław: biology student Monika Pawlik, Dr. Marcin Kadej, Dr. Adrian Smolis and Natalia Kuśmierek, examined this problem by analysing the data available on the Internet. Using selected keywords translated into several languages, they searched Google Images and social media such as Facebook, Instagram, Twitter and YouTube. They looked for reports concerning animals stuck in containers left in the environment. They focused primarily on five basic types of containers: bottles, soda cans, food cans, jars and cups.

They found that between 1999 and 2019 there were over 500 reports from 51 countries. The containers posed a threat to animals both in urban areas and in places far from human settlements, for example national parks or the desert.

The most common traps were soda and food cans and jars. Most cases concerned mammals (less than 80 percent of all records) and reptiles (about 15 percent). There were also single reports about invertebrates, birds, fish and amphibians.

Dr. Kolenda said: "Surprisingly, a large proportion of found cases concern medium and large animals. Among mammals, these were synanthropic species such as raccoons, skunks and domesticated animals (dogs, cats), but also ungulates and large predators such as bears. In the case of reptiles, there were mainly snakes and lizards, including large species of dragons, such as the Komodo dragon.”

Over 12 percent of identified vertebrates are threatened with extinction according to the IUCN, and several other species are listed in regional red books. In the case of invertebrates, almost all individuals found in the containers died, while the situation of vertebrates was much better. In over 80 percent of cases, it was possible to rescue the animal, even if it was a large predator (for example a bear or a leopard) or a poisonous animal (a cobra).

Research also confirmed the global scale of littering and its negative impact on biodiversity, and the need for immediate action to reduce the amount of litter in the environment. These include educational activities to increase public awareness of waste management, but also the introduction of a deposit system for bottles and cans as well as regular environmental cleaning campaigns.

The results were published in Scientific Reports.