How climate change affects co-evolution of trees and associated animals 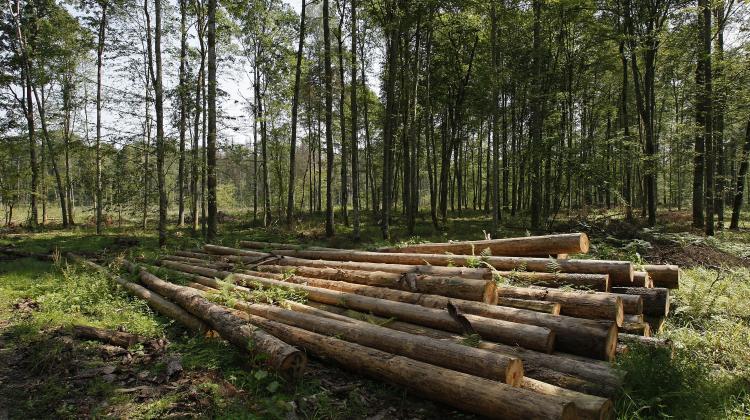 In recent decades, dieback of spruce stands has been observed in many regions of Poland. Some species of insects that feed on this tree might disappear with the spruce. That was the case during the climate change during the last ice age, new research shows.

Jakub Goczał, PhD student at the University of Agriculture in Kraków told PAP: “Climate change is an important driver of evolution and has a major impact on the formation of biodiversity. With climate change, the ranges of many plants will change. This forces many species associated with them, such as insects, to migrate with their host plants. Long-term isolation of populations separated during migration may lead to speciation and the emergence of new species.”

Knowing about the past of the species that inhabit Poland and how they reacted to climate change in the past helps to better predict the possible consequences of the current climate change. Goczał and his team investigated how dynamic climate changes during the last ice age influenced the co-evolution of Norway spruce and the associated herbivorousMonochamus sartor beetle.

He said: “The time of the Pleistocene glaciation was a period of dynamic climate change. During the last ice age, the advancing glacier from Scandinavia forced many tree species to retreat from their original ranges. These species usually survived in small areas, for example in mountain valleys, until the climatic conditions became more favourable for them.”

He explains that it was similar with spruce. Although a few tens of thousands of years ago, the spruce's range was even and covered a large part of central Europe, during the last ice age the tree was able to survive only in two regions called glacial refugia. One of them is the area of the Alps and Carpathians, the other was located in the European part of Russia. Separated by the glacier, these spruce populations were not been in contact with each other for thousands of years. When the climate warmed up in the Holocene, recolonisation began, the spruce from both refugia began to expand its range, and the divided northern and southern populations met again in the area of the Białowieża Primeval Forest.

Although the history of spruce migration was relatively well known before, it was not known how it influenced the animals closely related to this species. Now such data have become available.

Goczał said: “We focused on Monochamus sartor, a large beetle that develops in spruce wood. We examined individuals of this beetle from almost the entire area of its occurrence, from the Alps and the Carpathians through Scandinavia, Siberia, to Japan. We used morphological and genetic markers to describe the geographical structure of the insect.”

The researchers investigated how beetles from different regions differed in terms of genetics and external structure, and then analysed different evolutionary scenarios and selected the one that best explained the resulting geographic variability structure.

“We demonstrated that Monochamus sartor migrated with the spruce during the ice age and survived with it in two isolated areas, which led to speciation and the formation of two different subspecies,” Goczał said.

“When the climate improved, the insect and the spruce took over new areas until the separated populations met again in north-eastern Poland, near the Białowieża Forest, approx. 9,000 years ago.”

There, the species from the southern and northern refugia began to cross. Although thousands of years of isolation caused the separated populations to differ significantly, this period was too short for the emergence of separate species that could not interbreed.

Goczał adds that the conclusions of this study indicate that the disappearance of even one seemingly insignificant plant species in a given area may cause a domino effect and affect entire ecosystems and the course of evolutionary processes.

He said: “Norway spruce is particularly vulnerable to future climate changes and prefers cool, moist habitats and is associated with a continental climate. While the climate was too cold for spruce during the ice age, it is now becoming too warm. In recent years, we have been observing a significant decline of spruce stands in many regions of Poland,” he added.

Spruce trees are harmed not only by rising average temperatures, but also the lowering level of groundwater associated with droughts, because these trees have a shallow (disc) root system.

If spruce disappears from Poland, many other organisms will probably disappear with it.

Today, Goczał says, spruce is associated with at least several hundred different species of animals, mainly insects. Some of them will be able to find replacement species on which they can feed. But there is also a group of organisms that are so specialized that they cannot survive without spruce and will disappear with it. This includes not only insects, but also birds that eat them, for example, the endangered three-toed woodpecker that feeds on insects living in dead spruce trees. The disappearance of one species could cause new changes in the rest of the food chain.

“A key factor that determines the ability of species to adapt to climate change is the rate of change. We have studied historical changes that occurred at a much slower rate than they do now. The pace of climate change today is unprecedented. Many species have too little time to adapt.”

This means that climate change may be associated with much greater changes in ecosystems and significantly affect evolutionary processes.

The publication appeared in Scientific Reports. The research was financed by the National Science Centre as part of the Preludium programme.