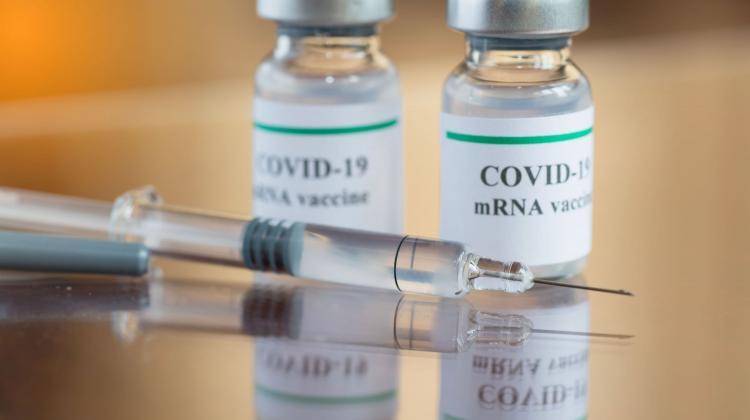 The mRNA vaccines against coronavirus, which will be used in Poland in a few days, are considered safe and do not modify DNA, say Polish experts.

The experts led by Professor Andrzej M. Fal from Collegium Medicum at the Cardinal Stefan Wyszyński University and the Hospital of the Ministry of Interior and Administration in Warsaw argue that vaccination is the safest method of obtaining immunity against pathogens. The same is also true for the SARS-CoV-2 coronavirus and COVID-19 vaccines, which have been approved for use in the European Union, the USA, UK, Switzerland and Canada.

In a white paper called 'Vaccinations against COVID-19. Innovative technologies and effectiveness', the authors say: “mRNA vaccines are considered very safe due to their inability to modify the patient's DNA, no possibility of infection, rapid degradation of the vaccine mRNA into harmless components, its similarity to the mRNA naturally occurring in cells and a very small dose necessary to produce a therapeutic effect.”

They add that high SARS-CoV-2 antibody titers are achieved seven days after the second dose of the vaccine in 90% cases.

mRNA, or a recipe for a given protein, is naturally transported from the nucleus to the cytoplasm of the cell, where the ribosomes are located. They are small cell organelles made of RNA and proteins, in which other proteins are produced 'on request'.

Usually, the recipe for a new protein comes from the cell nucleus where the DNA is located. But mRNA can be smuggled from the outside in the form of a drug or vaccine, and the ribosomes in the cell's cytoplasm can be used to produce the required protein. This is how the mRNA vaccine works.

These vaccines contain mRNA encoding a protein found in the SARS-CoV-2 coronavirus envelope (S protein). After injection into the body, it is structured in such a way (enclosed in a lipid shield) that it can cross the cell membrane and enter the cell, and then the ribosomes, where its production is triggered. The process has nothing to do with the nucleus and DNA. On the other hand, the dose needed to produce a therapeutic effect is very small. In the case of the Pfizer and BioNTech vaccines, it is 30 micrograms, over 100,000 times less than a teaspoon of sugar.

Once produced in the ribosomes, the S protein is presented outside the cell. Lymphocytes, cells of the immune system, recognize it as foreign, or as antigens. They immediately trigger the production of antibodies specific to the coronavirus. After fulfilling its role, the mRNA supplied with the vaccine breaks down into harmless, natural components - just like other mRNAs, with a different instructions to produce proteins, sent from the nucleus.

One of the advantages of the technology is that by changing only the nucleotide sequence (protein instruction - PAP) in a therapeutic mRNA, scientists can obtain almost any protein, because the method of obtaining and purifying mRNA of any sequence is the same. mRNA is obtained in a test tube thanks to a biochemical reaction and its production can be easily scaled up.

The flexibility of this technology means that the mRNA can be quickly modified to produce a different protein in the body, that will better protect against coronavirus. It will be needed when this pathogen mutates and another variant appears, with a changed S protein in its cover, BioNTech CEO Ugur Sahin says. If necessary, an already developed COVID-19 vaccine could be adapted to the new coronavirus variant in just six weeks. (PAP)