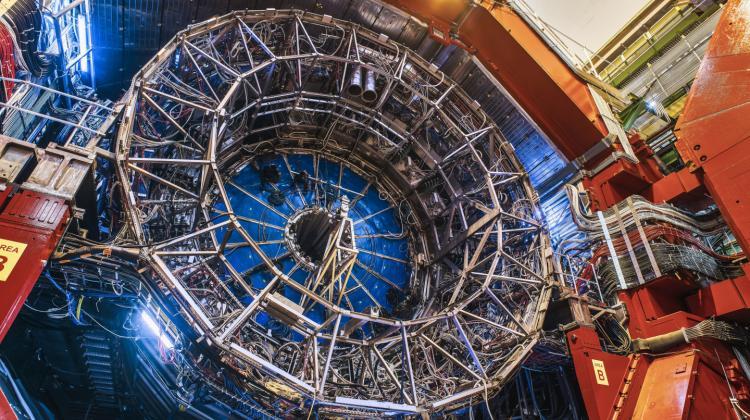 The ALICE detector at the Large Hadron Collider studies strange matter - the interactions of strange particles. The research (new results published in Nature) will help to better understand what is happening inside neutron stars. Polish researchers take part in the experiment.

Ordinary matter that we deal with on a daily basis, such as protons and neutrons that form atoms, is usually made up of up (u) and down (d) quarks. But these are not all quarks that exist in the Universe. Even more massive quarks have been described: strange (s), charm (c), true (t) and beautiful (b) quarks. These, however, are much more difficult to observe.

In the ALICE experiment at the Large Hadron Collider at CERN near Geneva, an international team of scientists investigated the least massive of these non-standard quarks - the strange (s) quarks. More specifically, the researchers wanted to learn more about the interactions of matter, which contains at least one strange quark. The publication on this subject has just appeared in Nature. It concerns the interactions of protons with ksi and omega particles - difficult to study particles, consisting of two and three strange quarks, respectively.

Professor Adam Kisiel from the Warsaw University of Technology told PAP: “Our group from the Warsaw University of Technology has been studying the interactions between pairs of particles for many decades by measuring their correlation. We have been participating in the ALICE experiment from the very beginning of collecting data; we also prepared the theoretical basis for researching such correlations. Our group is a leader in this area of knowledge.”

Neutron stars are remnants of supernova explosions. They are among the densest objects in the universe (not counting black holes). If the Sun was compressed so that it had the diameter of Warsaw (10-20 km), its density would be comparable to that of a neutron star.

Professor Kisiel says that for several years - also thanks to observations of gravitational waves - scientists have been able to observe what is happening in collisions of neutron stars.

He said: “One of the key unknowns in understanding neutron stars is whether there are strange particles at their very centre. Our theoretical predictions say that they could be there. But we do not yet know exactly how strange and ordinary particles - such as protons and neutrons - interact with each other. And if the details of these interactions change, it dramatically changes the properties of neutron stars. That is why it is so important to understand these interactions.”

Another participant in the ALICE experiment, Dr. Łukasz Graczykowski from the Warsaw University of Technology, adds that the mass of neutron stars resulting from observations is not consistent with some theoretical calculations. He said: “The reason for these differences may be that we do not know the interactions between ordinary matter and strange matter. Our research shows how to measure these interactions.”

HOW TO MAKE STRANGE MATTER

The easiest way to study the interactions of particles is to form them into a beam and collide it with another beam or target. Unfortunately, strange matter disintegrates very, very quickly, and it is extremely difficult to form a beam out of it.

Scientists decided to take advantage of the fact that strange matter is formed for fractions of a second in collisions of other, heavy particles. Dr. Graczykowski said: “In such a collision, quarks and gluons are formed. Together, they start to form new particles made of quarks, among them - strange quarks, which then interact with other particles. By measuring the signals that reach the detector, we are able to deduce how they 'talked' with each other, what the interactions between them were.

The method scientists use to study strange particles is called femtoscopy. A femtometre (10^-15 m, a thousandth of a billionth of a millimetre) is roughly the size of a proton. Professor Kisiel said: “Such sizes cannot be measured directly. Meanwhile, femtoscopy shows us how to extract information about the size of the source from the measured momentum of particles. These sizes are of the femtometre order.”

Dr. Graczykowski adds that this method was developed for other purposes (e.g. measuring the quark-gluon plasma drop size). Scientists have shown that it can be used to precisely study the interactions between various pairs of particles, including particles containing strange quarks.

“LHC is not only searching for the Higgs boson. Our research shows that collisions at the LHC can be used to study particles in non-standard ways,” said Dr. Graczykowski, adding that these studies also show a strong connection between particle physics and large-scale events recorded in astronomical observations.