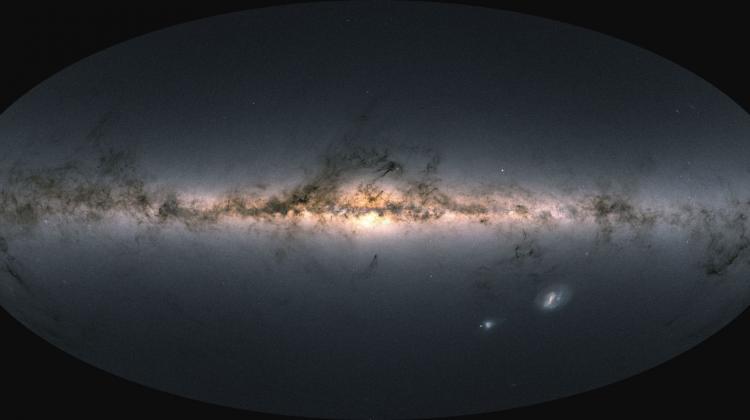 The latest sky map based on Gaia data showing extremely precise details on nearly 2 billion stars in our galaxy, has been released by the European Space Agency.

Taking up 1 petabyte of disk space, and involving astronomers from the University of Warsaw, is much more extensive than the previous 2018 Gaia catalogue and according to a university spokesman could “reveal new secrets of the Galaxy and the Universe.”

Gaia is an unmanned space mission launched in 2013. Its task is to prepare a 3D map of the Milky Way by measuring positions and motions of nearly one percent of the galaxy's stars. The mission is run by the European Space Agency (ESA).

ESA initially planned to end the satellite's operation in mid-2019, but the fuel reserves will allow it to operate even longer, probably until 2024.

According to the University of Warsaw website: “The mission instruments are so precise that if we were to observe the surface of the Moon from the Earth, we could determine the size of the objects as small as a coin located there.”

ESA published the first preliminary Gaia data catalogue in 2016, but only the second, more complete catalogue from 2018 proved to be ground-breaking. The positions of the stars determined by the Gaia mission have become the primary frame of reference in celestial cartography and are used to calibrate sky photographs taken by other projects. Nearly 4,000 scientific papers using Gaia data have been produced since 2018. Their breakthroughs have marked almost all areas of astronomy, from the study of planets, asteroids and stars to the structure of our Milky Way and distant galaxies.

He said: “My main task in the Gaia mission was to design a system to detect short-term phenomena occurring in the sky, mainly flares such as supernova explosions, but also the sudden disappearance of starlight.

“This system sends out dozens of alerts about various phenomena to astronomers around the world every day, and we at the Astronomical Observatory look closely at those brightenings that can be caused by lensing black holes.”

The most interesting astrophysical phenomena detected by the system are later tracked using robotic networks and traditional telescopes coordinated by Dr. Wyrzykowski.

Dr. Paweł Zieliński from the Astronomical Observatory of the University of Warsaw said: “Every telescope in the world is useful, because our phenomena can unexpectedly appear anywhere in the sky.”

Katarzyna Kruszyńska, a PhD student at the Astronomical Observatory of the University of Warsaw added: “The combination of ground observation data and the sensational data of the Gaia mission will allow us to identify lensing black holes that may be just around the corner in our Galaxy.”

The team's work is financed by the National Science Centre grants (Harmonia and Daina) and grants from the European Commission (OPTCON and ORP) under the Horizon 2020 programme.