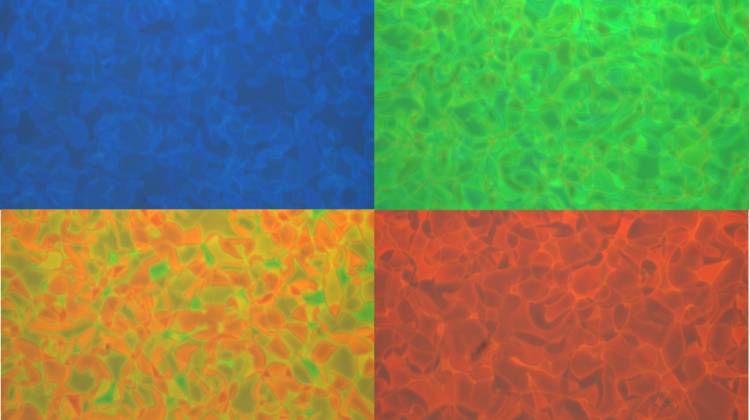 The colours on a liquid crystal display can be controlled electrically, without using complex colour filters, according to chemists and physicists from the Military University of Technology. The electro-optical effect they are studying may be used in the future in energy-saving TV sets or smart windows.

The glass of a smart window can display a lagoon or change its colour so that it does not let too much heat in and saves on air conditioning... Such windows, as well as TVs with even better colours, obtained in a technologically simpler way, are distant but possible applications of cholesterics with an oblique helix.

Dr. Mateusz Mrukiewicz from the Faculty of New Technologies and Chemistry of the Military University of Technology is currently investigating 'the effect of controlling an oblique helix with an electric field'.

Liquid crystals have different phases; they change depending on conditions, for example temperature. LCD TVs use the nematic phase of liquid crystals. In this phase, molecules can easily change their orientation when an electric field is applied.

Chiral liquid crystal phases twist polarized light. But scientists have found a way to obtain twisted molecules in a simple nematic phase. They are chiral nematics. Their application in this simple phase could greatly reduce the cost of devices such as displays.

Twisted (chiral) liquid crystals reflect light. This is called the selective reflection effect. But for many years it was impossible to control the colours, that is, the wavelength of the reflected light, with an electric field. The effect was impossible to achieve without complicated technology.

Mrukiewicz said: “Until ten years ago, a material could only reflect light of a given wavelength, for example only green light. And if we wanted red light, we had to heat the material or chemically modify it. We couldn't do it immediately. There were simply no materials that would allow to obtain colours from ultraviolet to infrared in a very simple way.”

Around 2010, a new class of liquid crystal materials with a curved shape resembling a banana was created. A spring structure, professionally known as an oblique helix, was achieved in the mixtures of these molecules. Previously, this spring could not be controlled. Today scientists are able to push and stretch it. By changing the electric field applied to this material, it is possible to control the colour of the reflected light. The effect of controlling the oblique helix in the new materials was discovered in 2015 at the Kent State University in Ohio where Dr. Mrukiewicz worked.

Now, in the materials produced at the Military University of Technology, researchers control the reflection of light using an electric field with a battery. In this way, they can obtain a very wide range, from UV to infrared. New materials must switch to different colours as quickly as possible. Scientists want the effect to be as fast as possible, so that it can be applied. For now, this time is too long and strongly depends on the temperature; a very high temperature is needed. Overcoming this barrier will significantly shorten the reaction time of the medium.

Dr. Mrukiewicz decreased the phase transition temperature in the liquid crystal and selected the composition of the mixture so that this effect could be obtained at room temperature. The scientist also conducts research on colour control using UV light and investigates the effect the direction of light beam has on the reflected colour.

This is only the initial stage of basic research. In the future, in the new generation of LCD TVs, colour could be produced by electrically controlled pixels without the complex colour filters used today. Such new liquid crystal displays would use less energy while displaying the full range of colours.