Particles perform ‘mysterious dance’ as they sink to seabed 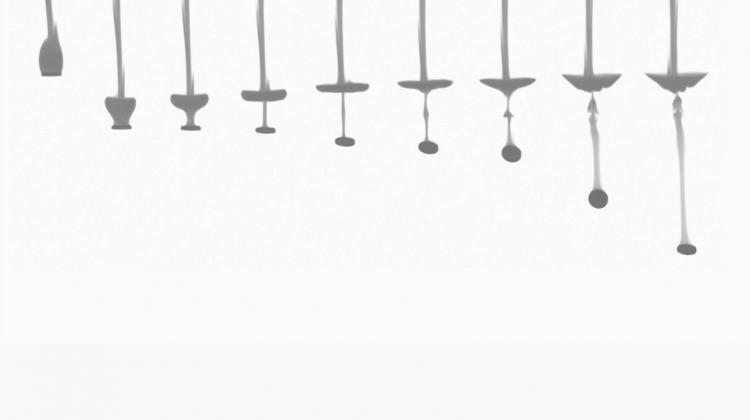 Photo: A disk-shaped particle (diameter 3 mm) sinking in a fluid column with a density jump and a flow trace behind the particle (dye visualization). Photos taken at the Hydrodynamic Micromodels Laboratory, Institute of Geophysics PAS, credit: M. Mrokowska

Plankton, microplastics and mineral crumbs, which are often flat in shape, encounter changes in the density of water layers when sinking in seas or oceans. And then they perform a ‘mysterious’ dance, thanks to which they descend more slowly than previously assumed, shows the researcher from Institute of Geophysics PAS.

Solid particles sinking to the bottom of seas and oceans, such as plankton, dead remains of organisms, inorganic matter or the so-called sea snow, carry carbon in them. Understanding the physics of how such particles move may be useful to biologists, marine ecologists, oceanologists, climatologists to more precisely model the circulation of this element in nature.

For example, models describing particle sinking in natural waters assume that such particles have the shape of perfect spheres. Dr. Magdalena Mrokowska from the Institute of Geophysics of the Polish Academy of Sciences checked in her research (a publication in Scientific Reports) what the movement of small particles looked like if they were shaped like flat discs (diatoms and microplastic flakes have a similar shape). It turned out that when such particles hit the limit of density in water, they begin to perform a dance that slows down their descent.

Videos presenting particle descent are available on the publication's website.

The existing models have another limitation. “So far, it has already been described quite well how particles fall in a liquid with uniform density. However, in a sea or an ocean, the density changes with depth, we have so-called density gradients,” the researcher says. In addition, she explains, in seas and oceans we often deal with water density jumps. This is the case, for example, where masses of water of different salinity or temperature meet. “There, in my opinion, interesting phenomena take place. Particles accumulate and fall, starting from individual particles to their aggregates. So when such structures reach a density jump, they stop for some time. Such a slowdown can be caused not only by the surrounding liquid, but also the density gradient, which creates additional drag on the falling particle. And this, in turn, affects large-scale processes related to carbon transport and microplastics contamination,” she adds.

Dr. Mrokowska performed small-scale experiments - in columns of fluid with layers of water of different salinity. It turns out that when a particle (a disk with a diameter of 3 mm or less and a thickness counted in micrometers) encounters such a density limit, it loses its stability. The disk, hitherto falling horizontally, deviates from its position, and this dance slows its movement. This means that even the physics describing the motion of flat structures is more complicated - and less obvious - than the fall of a normal ball. Not to mention the movement of irregular structures such as, for example, sea snow.

The researcher explains that sea snow is a combination of various particles, including organic matter, which interact with each other and form larger structures. Studying the dynamics of such aggregates falling is an even greater challenge. They are porous structures and there are still many unknowns related to the physics of their falling. Dr. Mrokowska's research shows how much we still do not know about the falling movement of various types of particles.