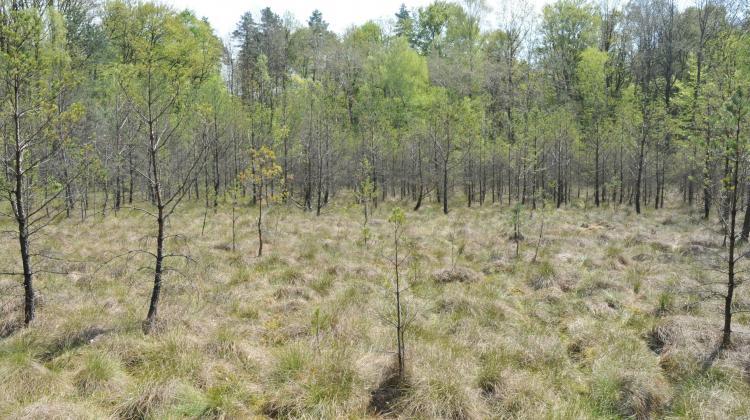 Pawski Ług peat bog (Lubusz province), where research on changes in the environment was carried out. Credit: Mariusz Lamentowicz

Knights from the 14th century Order of Malta had a profound affect on the ecosystem in Poland’s Lubusz region, scientists have found.

Research led by Professor Mariusz Lamentowicz from the Adam Mickiewicz University, found that intensive changes in the environment

in the vicinity of the Pawski Ług peat bog caused by man began around 1350 at the same time as the Order of Malta began operating in the area.

Professor Lamentowicz said: “We are interested in the transition from a more stable period for nature, which in human history was the period of the tribal community, to a more aggressive management of nature, which began in feudal time.”

The Pawski Ług peat bog is located very close to Łagów, where in the 14th century a castle of the Knights of Malta was erected (the area belonged to Brandenburg at that time). Next to the Templars and Teutonic Knights, the Knights of Malta were among the largest chivalric orders. With their increasingly modern approach to management, they also led to intensive exploitation of nature in the areas under their control.

Lamentowicz said: “By studying the history of the Pawski Ług peat bog, we could be almost 100 percent certain that we were capturing the activity of a specific social group that existed there. By performing radiocarbon tests, we could measure when we had lost the primeval nature in this area.”

By analysing the composition of different peat layers, the researchers were able to draw conclusions about the conditions, in which each of them had formed. Based on the presence of hornbeam pollen in the older, deeper peat layers, the researchers concluded that before being settled by the Knights of Malta, Pawski Ług was a very wet swamp surrounded by a primeval forest. The small amounts of charcoal present in the peat indicate that the forest was regularly burned on a small scale by the Slavic tribes inhabiting the area.

During the rule of the Order of Malta, most of the lands were transferred to the peasants for agricultural purposes. Over time, the amounts of hornbeam pollen in the peat layers began to drop, replaced by grain pollen. This, in turn, suggests that deforestation took place around the wetlands, and that forest was replaced by cultivated fields, meadows and pastures. This deforestation could have had an impact on the groundwater level in the Pawski Ług peat bog.

Professor Lamentowicz said: “Now we can observe a similar moment of deforestation, for example, in the Amazon Forest. And we can say that 700 years ago we no longer had primeval forests in the Lubusz region. There were only fragmented areas, from which forests were gradually disappearing.”

He added that at that time the deforestation process was taking place in many places in Europe, including Wielkopolska. In other places, however, it is much more difficult to assign responsibility for these environmental changes to a specific social group. And in this case, it is quite clear that the loss of primeval forests was caused by the Knights of Malta.

Lamentowicz said: “This is one of the studies that helps us understand when and at what rate the primeval nature of forests and swamps disappeared in the areas of today's Poland.”

The research appeared in Scientific Reports.