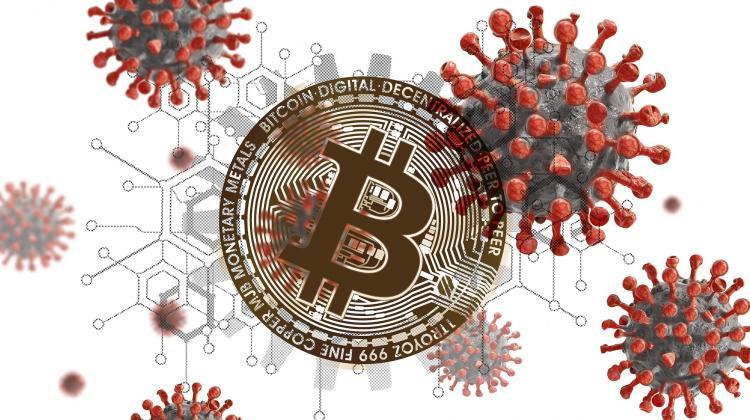 Cryptocurrencies have proven to be a safe financial haven during the COVID-19 pandemic. (Credit: Gerd Altmann, Pixabay)

Despite the coronavirus pandemic proving difficult for the economy, the virtual currency market has shown relative stability.

And according to scientists from the Institute of Nuclear Physics of the Polish Academy of Sciences, this is yet further proof that cryptocurrencies can be treated as a mature and full-fledged financial instrument.

Led by Professor Stanisław Drożdż, the scientists decided to study the behaviour of the cryptocurrency market in response to the economic situation caused by the pandemic.

Given that the first cryptocurrency called bitcoin appeared in 2008 at the height of the global financial crisis, the scientists wanted to see whether cryptocurrencies have reached the maturity and stability required of a legitimate financial instrument?

Drożdż said: “Our previous quantitative analyses of the various characteristics of the complexity of the cryptocurrency market and the specifics of its correlation with more traditional world markets, such as stocks, currencies or commodities, showed that this market became essentially indistinguishable and independent from them.

“With the looming threat of the pandemic, we seriously considered the possibility that investors would start to get rid of something like bitcoin first. Due to their virtual nature, most potential market participants still perceive cryptocurrencies as quite peculiar items.

“In times of crisis, during violent economic and political turmoil, people resort to financial resources they consider more reliable. But our comparisons showed that solid instruments recorded drops at the most critical moments, while cryptocurrencies behaved in a much more stable manner.”

In the first phase of the pandemic, when it was not known how the situation would develop, there was an escape from risky financial instruments to bitcoin, the researchers said.

A positive correlation of bitcoin with financial instruments considered safe, such as the Swiss franc, Japanese yen, gold and silver, could be observed. Then there was a further increase in the number of infections around the world and the associated sharp drops in global stock markets (especially in the US) due to a total sell-off of all assets, including bitcoin. Investors resorted to cash, mainly the yen and the dollar. During that period, bitcoin lost its safe-haven status, but the same was true of gold and silver. Still, it behaved like a regular, traditional, and reliable financial instrument.

The correlation of bitcoin (BTC) and ethereum (ETH) with conventional financial instruments during the spikes on global stock exchanges as the epidemic slowed down during the summer of 2020 is particularly significant.

Co-researcher Dr. Marcin Wątorek said: “This is an intriguing effect because there were no such correlations before the pandemic, and they remain at a significant level. It may be a proof that bitcoin has become a full-fledged part of the financial market. One could say that the COVID-19 pandemic has positively verified cryptocurrencies. It turned out that investors were not afraid of bitcoin, quite the opposite: they included it in their investment portfolios.”

In their research, the scientists focused on the dynamic and structural properties of the cryptocurrency market. They analysed data showing the exchange rates of 129 cryptocurrencies on the Binance platform. The analysis consisted of three parts, each aimed at examining a different aspect of the market structure.

Team member Dr. Jarosław Kwapień said: “We approached the topic from three sides: the dynamics of the cryptocurrency exchange rates into other virtual and fiat currencies, coupling and decoupling of cryptocurrencies and traditional assets, and the inner structure of the cryptocurrency market. We used data from January 2019 to June 2020. This period covers the particular time of the COVID-19 pandemic; we paid special attention to this event and examined how strong its impact was on the structure and dynamics of the market. The analysed data include several other significant events, such as the double bull and bear phase in 2019.”

The analysis of the cross-correlation between the cryptocurrency market represented by the BTC/USD and ETH/USD exchange rate and the traditional markets of major fiat currencies, major commodities (such as oil and gold) and US stock indices led to the conclusion that the cryptocurrency market was independent of other markets throughout 2019, but temporarily correlated with these markets during several events in the first half of 2020, for example in January, when the first COVID-19 case was reported in the United States, in March during the pandemic outbreak, and from May to July 2020 during the second wave of the pandemic.

In the first case, bitcoin showed anti-correlation with major stock indices such as the S&P500 and Nasdaq100, but in the second and third cases, the corresponding correlations were positive. The correlations between bitcoin and several fiat currencies and the commodity market were also positive during these phases.

Professor Stanisław Drożdż said: “The most significant result of our analyses of the dynamics of the world's financial markets during the COVID-19 pandemic is that the cryptocurrency market, and especially bitcoin, turned out to be one of the most resistant to turbulence all global markets suffered during this period.

“This observation is consistent with and complements our previously published results on the stability and maturity the cryptocurrency market approached in the past 2-3 years. The COVID-19 period seems to confirm those earlier signals.”