How do cells memorize information? A new lead 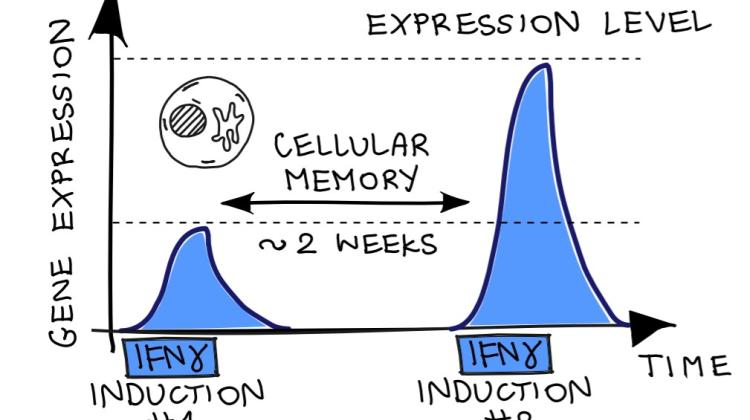 Can cells remember and if so, how is information of previous environmental exposures recorded in the genome? There are still many unknowns, but a new lead comes from research conducted by a Polish scientist: cohesin, the protein 'paperclip' of the genome may be involved.

Memory is associated mainly with the work of the brain, i.e. neurons. The process of remembering and storing information is also extremely important for the work of the immune system, the task of which is to fight infections. But many other cells in the body must register and learn to respond to stimuli as well.

But where is the memory actually located at the level of individual cells and molecules? There is still no complete answer to this question.

A phenomenon called transcriptional memory can help solve this problem. When exposed to external signals, a cell can activate specific genes and start producing specific proteins. The information about the cell's response to a given signal needs to be somehow recorded in the genome, not by changes in the DNA sequence, but, perhaps, by spatial changes in the arrangement of genetic material - the way it is folded. Thanks to this, when a given signal occurs again, the cell can respond more effectively.

Dr. Wojciech Siwek from the University of Oxford said: “We did not know what exactly was responsible for transcriptional memory. I tested some 50 different hypotheses. None of them turned out to be true.” But patience paid off, and the scientist finally found an important lead. His research shows that a certain protein called cohesin is associated with transcriptional memory. The research was published in Molecular Cell (https://doi.org/10.1016/j.molcel.2020.10.005)

Cohesin forms a ring-like structure, with which the genome is folded. It has a huge role during cell division however, cohesin also works at other times in the cell's life. It is responsible for genome folding and regulation of gene expression.

Dr. Siwek studied interferon gamma based transcriptional (cell) memory in cancer (HeLa) and skin cells The research group observed that certain genes responded with a much more intense protein production on the second exposure than on the first. The stronger response was noticeable even after 14 days, when the cells had already gone through about 14 division cycles. The information about the reaction to interferon had to be not only stored in cells that had direct contact with the stimulus, but also transmitted through mitotic divisions.

Scientists identified the gene that differed most in expression when re-exposed to interferon. They investigated what determined the differences in its expression. It turned out that cohesion was important. Its local removal from the space around the gene significantly improved the cell's response to the signal.

The research does not yet answer the question of how cohesin affects transcriptional memory, but we now known that it is involved.

Dr. Siwek said: “If we could learn to influence and modify cellular memory, perhaps a therapy based on it would become available in the distant future. We could develop more effective ways to combat cyclical infections, such as the seasonal flu, or develop new ways to prevent recurrence of cancer.”