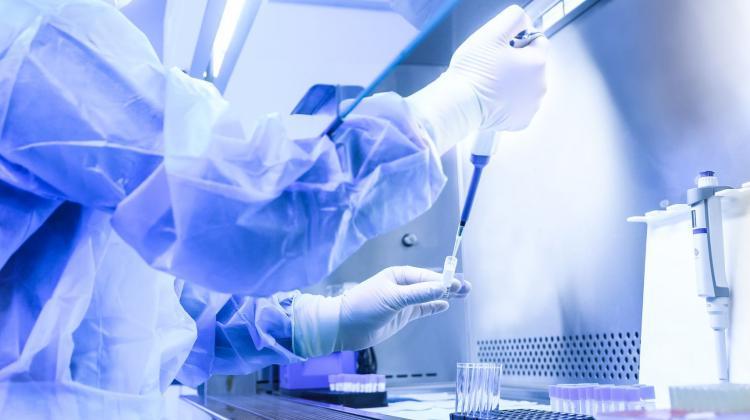 The final version of the first Polish genetic test for SARS-CoV-2 is now available.

Developed by scientists from the Institute of Bioorganic Chemistry of the Polish Academy of Sciences in Poznań, the accuracy of the genetic MediPAN-2G+ FAST COVID test exceeds 99%.

Research on the test started in March 2020 after the outbreak of the first pandemic.

Director of the Institute of Bioorganic Chemistry of the Polish Academy of Sciences, Professor Marek Figlerowicz said: “We knew that we had the knowledge, competences and technical background to develop a product that would match or exceed the quality of available tests.

“During the preliminary work, we realized that we lacked a partner who would help bring the product to the market. Today, we can say with certainty that if it were not for the production facilities and business competences of Polish companies, the test verification process would take much longer."

The Polish MediPAN-2G+ FAST COVID test detects two specific genes of the SARS-CoV-2 coronavirus. In many other tests, one of the detected genes is the so-called screening gene characteristic of the entire family of coronaviruses. The authors of the test say that its effectiveness has been confirmed in independent laboratories with various diagnostic devices.

The test has a short RT-PCR reaction time (about 1 hour), which may improve the efficiency of laboratories (it halves the detection time), and thus speed up the result for the patient. It is one of the fastest tests of this type, its creators say.

According to the creators of the test, because of their solution, Poland can become independent from the import of foreign tests and components necessary for their production. It is also a success of young researchers who initially worked on the development of the test as volunteers.

The test prototype was designed and made at the Institute of Bioorganic Chemistry of the Polish Academy of Sciences in Poznań. Medicofarma took the product from laboratory to production scale and was responsible for comprehensive production. Polpharma supported the work on transforming the prototype into a commercially optimal product, so that it would have the desired features and could be transferred from the laboratory to mass production.

The project received financial support of PLN 15 million from the Ministry of Science and Higher Education and PLN 100,000 from the self-government of the Wielkopolska Voivodeship.