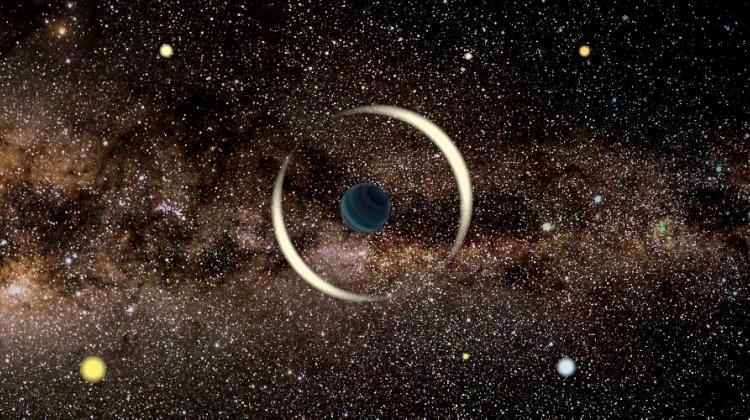 The smallest rogue Earth-like planet in the galaxy has been discovered by Polish astronomers.

Scientists who study the formation and evolution of planetary systems such as the Solar System have long predicted the existence of rogue planets, ejected from their parent systems and traversing the Galaxy alone.

The first evidence for the existence of such planets in the Milky Way was provided a few years ago by Polish scientists from the OGLE team, from the Astronomical Observatory of the University of Warsaw.

Now, in the latest issue of the prestigious Astrophysical Journal Letters, members of the OGLE team announced the discovery of the smallest rogue planet to date.

The object they have detected is smaller than Earth and has a mass of about three masses of Mars and is located several thousand light years from the Sun.

OGLE project leader, Professor Andrzej Udalski from the Astronomical Observatory of the University of Warsaw said: “Our current discovery confirms that low-mass rogue planets are common in the Milky Way, there can be billions of them, and that they can be detected and characterized by observations from the Earth's surface.”

He added: “Rogue planets emit almost no light and - by definition - do not orbit any star. Their detection using classical methods is practically impossible.”

To search for such planets, scientists use gravitational microlensing.

Microlensing comes from Einstein's theory of general relativity - a massive object (the lens) may bend the light of a bright background object (the source). The lens’s gravity acts as a huge magnifying glass which bends and magnifies the light of distant stars.

Lead author of the recent discovery Dr. Przemysław Mróz from the California Institute of Technology said: “If there is a massive object between an observer on Earth and a distant source star, for example another star or planet, its gravity may bend and focus the source's light. An observer on Earth will then see a short-term brightening of the distant source.

“The chance of observing microlensing phenomena is extremely small, because three objects (the source, the lens and the observer) must be almost perfectly aligned. If we were looking at only one source star, on average we would have to wait almost a million years to observe microlensing.

“That is why modern experiments looking for microlensing phenomena observe hundreds of millions of stars located in the centre of the Milky Way, where the probability of this phenomenon is greatest.”

Gravitational microlensing does not depend on the brightness of the lens, so it is an excellent way to detect objects that emit no light at all, such as planets. The less massive the lensing object is, the shorter the microlensing phenomena are on average: while the typical microlensing caused by a star lasts several days, the phenomena caused by planets with a mass of Jupiter last typically 1-2 days, and by Earth-like planets - only a few hours.

This effect allows astronomers to more precisely estimate the mass of the lens.

The latest rogue planet discovery, named OGLE-2016-BLG-1928, was probably caused by an object that left its home planetary system shortly after its formation. The interaction between protoplanets can lead to the ejection of some of them into the interstellar space. But there are many other mechanisms that can have the same result. The study of rogue planets helps scientists better understand the processes leading to the formation of planets and planetary systems.

The search for rogue planets is one of the scientific engines of the Nancy Grace Roman space telescope mission, the flagship mission prepared by the US space agency NASA. The telescope is set to be launched into orbit in 2025 and has the potential to revolutionize this field of extrasolar planet research.

The OGLE sky survey project conducted by astronomers from the University of Warsaw is one of the largest and oldest contemporary sky surveys, and has been underway for over 28 years. Polish researchers use the Warsaw Telescope at the Las Campanas Observatory in Chile.

Find out more on the publication page.