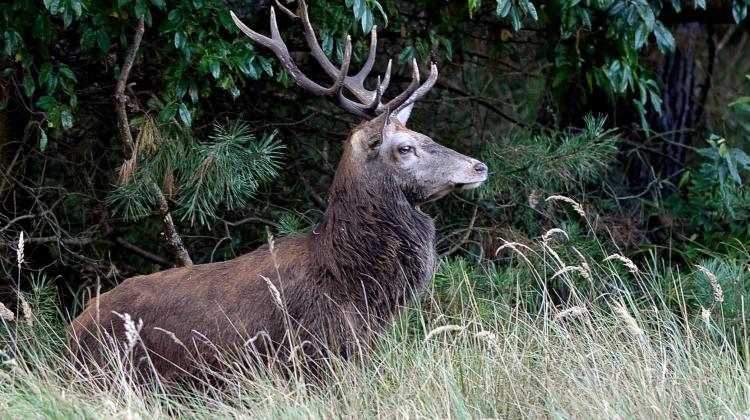 For the last 54,000 years, red deer have lived in forests, and the most important factor limiting their range were cold winters, says analysis of the historical presence of the species in Europe to the Urals.

Red deer (Cervus elaphus elaphus) is one of the species of ungulates with the widest range in Europe. It lives in Scandinavia, the western and central-eastern parts and the southern parts of the continent. The eastern border of its the continuous range of this species in Europe today runs through Western Russia.

In the past, however, the range of deer in Europe changed with climate change. Like other species inhabiting the temperate climate zone, red deer had the smallest range approx. 18-26,000 years ago, during the last glacial maximum. Many species (including mammals) survived this time in glacial refuges, mainly in southern Europe. After the glacier retreated and the climate warmed during the Holocene, species such as the red deer re-inhabited much of the continent.

Currently, deer inhabits various habitats in Europe, both open areas, such as the moors in Scotland, and wooded areas, where it is most common today. Until now, however, it was not clear exactly what climatic factors determined the distribution of deer in Europe. It was also unclear whether the areas of its occurrence were optimal for this species, or whether this species preferred forest habitats, because other environments were inaccessible to it as a result of human activity.

Under the supervision of Dr. Magdalena Niedziałkowska from the Mammal Research Institute of the Polish Academy of Sciences, a team of over 30 scientists from Poland, Czechia, Ukraine, Germany, Russia, Belarus, Estonia, Armenia, Serbia, Romania, Greece, Great Britain and the Falkland Islands, analysed the climatic conditions and habitats in the places where deer have occurred in the last 54 thousand years in Europe and the Urals. They analysed data from 984 locations where remains (mainly bones) of this species were found. Their age was determined by radiocarbon dating.

But these changes were different in the western than in the eastern part of the continent and the Urals. During the height of the last glaciation, the range of deer rapidly decreased in Western Europe, but did not change much in Eastern Europe and the Urals. After the glacier retreated, the deer relatively quickly re-colonised the western and northern part of the continent, while in the Holocene its range to the east, in the Ural region, began to shrink slowly. The last deer disappeared from this region about 200 years ago, the researchers said.

The researchers also found that most of the deer sites were covered with different types of forests, such as boreal coniferous, mixed and deciduous forests - and sclerophyllous evergreen forests, now found in the Mediterranean. Less than 10 percent of locations included areas with other types of biomes, such as tundra, steppes and deserts. On the basis of palynological data, researchers showed that in the Holocene forest cover was greater in the analysed places in the period before 4,000 years ago than in the later period, most likely due to the deforestation of large areas of Europe by man and therefore less accessibility of forests to deer.

Since the collected data on the range of deer in the last 54,000 years are incomplete, scientists also carried out modelling of ecological niches that allowed them to identify the areas where deer could potentially have existed at various times, both before, during and after the peak of the last ice age. On this basis, they showed that the range of red deer during the peak of the last ice age was probably significantly greater than previously thought. It included not only glacial refugia located on the Iberian, Apennine and Balkan Peninsulas, but also much of Western Europe, as well as the areas around the Black Sea and Asia Minor.

The modelling results showed that the climatic conditions in the Urals were not suitable for red deer despite the fact that many deer bones from the last 54,000 years were found in the area. Genetic analyses of samples of deer bones from the Urals helped explain these discrepancies. It turned out that most of the bones in this area belonged to the deer C. canadensis (closely related to red deer), a species much better adapted to living in a cold climate. These genetic analyses also explain why the deer range began to shrink, and eventually the species disappeared from Eastern Europe and the Urals as the climate warmed. Today, the eastern limit of the red deers’ range in Europe overlaps with the isoline of average January temperatures between minus 10 and minus 15 degrees Celsius.

The research results show that the distribution ranges of deer in Europe changed with climate change, not only in the north-south, but also in the east-west direction. The results can be used to model changes in deer range in Europe due to future climate change.

The results of the analyses have been presented in the Journal of Biogeography.