No place like home: Eagles’ nest are shared by nearly 70 species of animals 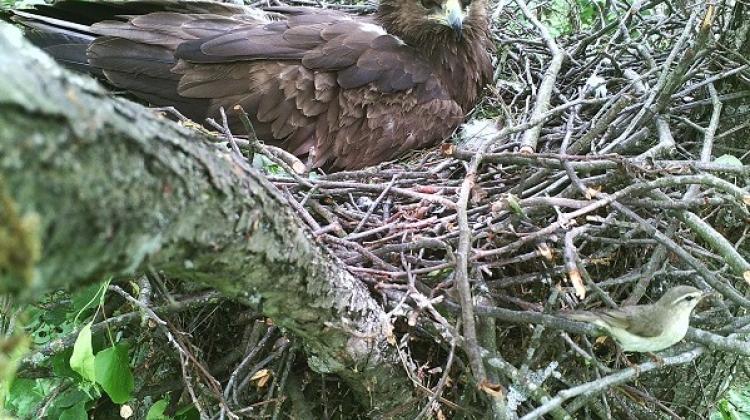 Small birds like to visit the greater spotted eagle nests to feed and even lay eggs. But why do squirrels visit their nests and what are martens looking for there - and who proves their masculinity by killing endangered species? Professor Grzegorz Maciorowski explains.

The greater spotted eagle is the rarest eagle in Europe. A small ecosystem of organisms that feed and live there forms around the nests of these protected birds. By protecting the eagles, we protect this entire dying world.

Based on long-term monitoring of nests, together with naturalists from the University of Life Sciences in Poznań and the University of Szczecin, Professor Grzegorz Maciorowski has shown that predators living in Polish forests build 'assets' that are used by other animals.

He says: “The eagle defends its territory, and thus other predators do not attack smaller birds (present in the close vicinity - PAP). The birds are not afraid of the eagle, because it flies out to hunt in open spaces inhabited by rodents or amphibians, which it brings to the nest. It does not hunt tit, goldcrest, or even squirrels.”

As proof, he shows pictures of a female eagle in a nest. At the same time, a chiffchaff is jumping all over the nest, looking for insects. The researcher explains that the predator brings leafy branches to the nest, there are also food leftovers there, which is why animals representing various systematic groups, including insects, live together with eagles. Smaller birds take advantage of this.

Other birds steal blades of grass and twigs from the eagles to build their own nests in the immediate vicinity. The most social ones are able to organize a breeding place literally inside an eagle's nest, between the branches it is built of. There, nothing will threaten their eggs and chicks. Well, almost nothing. Because, apart from squirrels, which 'drop in' to sit back and eat cones growing on the same tree, martens are also interested in the nest. Professor Maciorowski points out that the pine marten is a dangerous predator that destroys eagle's broods: it eats eggs or even kills chicks almost capable of flight. 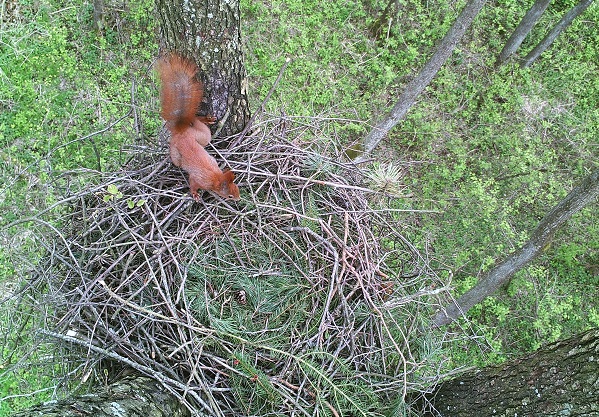 Monitoring conducted by the scientists has shown that the protection of the Europe's rarest greater spotted eagle in is not only about preserving this particular endangered species. Preserving habitats is 'to be or not to be' for many other rare species. What is the legal status of this protection now?

Professor Grzegorz Maciorowski cites regulations stipulating the necessity to create a 200 m radius protection zone around the greater spotted eagle's nest. Entry and any changes are prohibited in this zone all year round. Further, within a radius of 200 to 500 m, a periodic protection zone is designated, where restrictions apply during the breeding season.

In Poland, there are several thousand such places for various species of eagles and other rare birds, including some owls, rare grouse, black stork or colourful roller. The Polish greater spotted eagle population actually nests only in one place. The Biebrza Valley is home to the largest population in the European Union (90%), which numbers... about 10 pairs.

The greater spotted eagle is the most endangered eagle of the Western Palearctic. Does anyone doubt the need to protect it? 'The eagle has many different problems. Its living space is shrinking rapidly, because farmers drain the swamps and sow maize in transformed areas, irreversibly destroying their feeding grounds', the scientist notes.

Another threat is associated with the autumn migration to the south. Maciorowski says: “When flying through the Middle East, they can be shot by local poachers. Last year alone, the Lebanese probably shot about a third of all lesser spotted eagles in the world. It is also an extremely dangerous place for greater spotted eagles. Many birds die there.”

He explains that people shoot birds for cultural reasons; in Lebanon, a man's social status is the higher, the bigger the bird he kills.

He adds that the inhabitants of Mediterranean countries lay poisoned carrion to fight the golden jackal and wolves hunting sheep and goats. But according to Maciorowski, birds of prey are the first animals to find poisoned carrion. As a result, these winged predators die en masse. “In Turkey, some of our greater spotted eagles, both young and adult birds, are killed in this way. These birds are the disappearing world,” he says.

Extensive research, including nest monitoring with the use of cameras and camera traps, is expected to help in the effective protection of the greater spotted eagle, its accompanying species, and above all, the habitats of these birds. An article on this topic appeared in the American journal Ecology.

The study’s co-author, Professor Piotr Tryjanowski from the Department of Zoology of the University of Life Sciences in Poznań, says: “Our approach also has a strong theoretical and cognitive aspect and shows that the indicative role of birds of prey is based not only on food dependencies, but that their nests are local, small biodiversity centres.

“The results are really surprising. We knew that large bird nests were a magnet for other, smaller species, but - as in the case of the white stork - literally a few species were mentioned.”

Meanwhile, as many as 67 species of birds and two species of mammals used the eagles' nests. This is a world record that reflects the species richness of the Biebrza Marshes.

For over 30 years, Professor Grzegorz Maciorowski's team has been conducting research on rare birds of prey and accompanying species in the Biebrza Marshes, the largest low peat bogs in central Europe and one of the most valuable natural places on the continent's map.