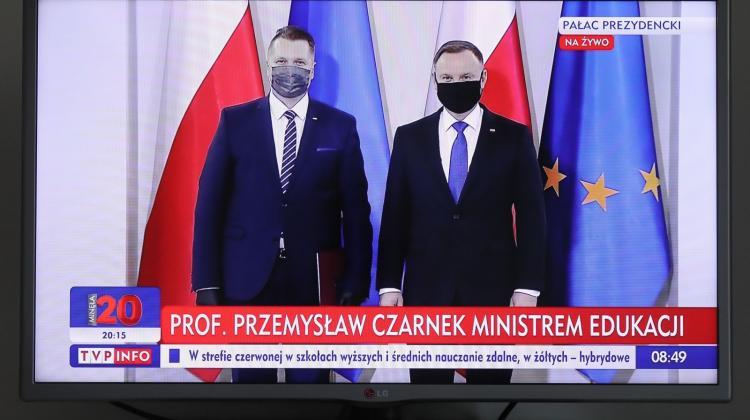 Broadcast of the ceremony in the Presidential Palace in Warsaw, during which the President of the Republic of Poland Andrzej Duda (R) appointed Przemysław Czarnek (L) the Minister of Education and Science, Oct. 19. Czarnek's appointment was delayed due to his infection with the coronavirus. PAP/Paweł Supernak 19.10.2020

Przemysław Czarnek has been made Minister of Education and Science.

Appointed by President Andrzej Duda, among the new minister’s responsibilities will be the need to strengthen the role of parents in the education process and ensuring freedom of scientific research.

President Duda said the combination of two departments in one ministry puts a lot of responsibility on the head of the ministry, but also allows for better coordination of two parts of the educational process.

He said: “This is a very difficult task, because today there is a lot of content in the Polish education system, about which Polish families have great doubts as to whether they would like their children to be educated in this way.”

He added that his intention was for “parents to have a real influence on the decisions - what curriculum and other content is passed on to children at school, against which parents have the right to defend their children.”

A presidential draft amendment to the education law is aimed at “strengthening the constitutional right of parents to raise their children in accordance with their beliefs.”

If passed, the activities of all organizations and associations in schools will require parental consent.

The president said that not only the programmes in primary and secondary schools, but also the functioning of universities required a 'deep review'.

He said: “In recent years, people trying to achieve higher ranks in scientific development, formalize it, have been brutally attacked for not having a politically correct, liberal-leftist worldview.

Duda said that there was no 'universally binding view' in Poland, and he characterized science as a clash of different points of view.

Originally, Czarnek was supposed to receive the nomination with other new ministers on October 5, but earlier that day he revealed that he had tested positive for the coronavirus.

The appointment of ministers was then postponed to October 6, when all new members of the government accepted their appointments, except for Czarnek, who became the Minister of Education and Science after the procedure related to his coronavirus infection was completed.