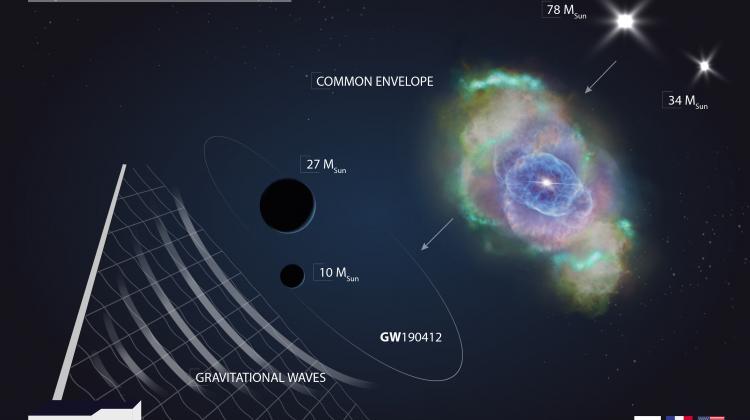 How did two black holes of different masses collide? From the upper right to the lower left corner: 1) the binary star system phase, 2) the common envelope phase, where the black hole formed from the more massive star is inside the envelope of the second star (the black hole is not visible) 3) the phase of two black holes near the merger 4) gravitational waves accompanying the merger of black holes. Credit: Nicolaus Copernicus Astronomical Center PAS, https://iopscience.iop.org/article/10.3847/2041-8213/abb

In April 2019, gravitational waves were observed indicating that two black holes with significantly different masses had merged. The team led by Polish researchers explain how such different objects could be neighbours and how their cosmic encounter happened.

In April 2019, LIGO/Virgo experiments observed gravitational waves from the merger of black holes with masses of about 30 and 10 solar masses (the object GW 190412). A cosmic event that took place a long time ago in a galaxy far, far away (2.4 billion light-years from Earth) shook Earth's measuring devices.

The researchers did not know how to reverse engineer this event and find out how objects with such different masses could end up in each other's vicinity. They were used to modelling 'symmetrical' collisions of two black holes, mergers of black holes with similar masses.

But models developed by Polish astrophysicists helped to solve the problem, allowing them to decode the past of the system.

Polish-American-French research published in Astrophysical Journal Letters showed that the source of the merger were two massive stars - initially one with a mass of 78 solar masses and the other with a mass of 34 solar masses. The first author of the publication, Aleksandra Olejak, a PhD student at the Nicolaus Copernicus Astronomical Center PAS explains in an interview with PAP that these stars were located at a distance of 700 rays of the Sun, i.e. approx. 3 times further than the Earth's distance from the Sun.

The more massive star used up its fuel faster, began to expand, its envelope got closer to its neighbour, and the stars began to exchange matter. The star then lost its envelope, became a helium star, and over time collapsed to form a black hole with the mass of 25 solar masses.

For a while the remaining, less massive star formed a system with the black hole. But when it used up its fuel, it became a giant, and its envelope expanded so much that the black hole ended up within it. This common envelope phase was important because the separated system of two bodies transformed into a tight system. Due to the loss of orbital energy (the black hole was moving in its neighbour's envelope), the system became increasingly tighter. Over time, the second star lost its envelope, became a helium star, a supernova, and finally a black hole the mass of 10 solar masses. Olejak said: “This resulted in a system of two black holes, which interacted with each other for 20 million years, emitting gravitational waves, and thus gradually losing energy. Until they collided and formed one massive black hole.”

That was the collision observed at LIGO/Virgo. The PhD student explains that for such powerful events in space, black hole collisions are surprisingly 'quiet' and dark. No electromagnetic radiation is produced - so there are neither flashes nor, for example, radio waves. So even if we aimed the best telescope in the world at such a place at the right time, we would not see anything spectacular. Fortunately, since 2015, we have at one more 'sense' our disposal, with which we can observe cosmic events. These are the gravitational wave observatories LIGO (in the US) and Virgo (in Italy). In these observatories we can observe the effects of the collision of black holes.

Olejak said: “We are picking up more and more signals from gravitational waves, but we do not always know the exact scenario of these signals' origin. We only see the end result. There is some debate as to where these signals come from. Whether they could have formed in isolated binary systems or before the collision took place, there was an interaction of more bodies, for example three or four stars - because that is also possible. In our work we show that we can recreate the history of systems such as GW190412 using isolated evolution. We also propose a way to determine whether a given object formed from two, or perhaps more objects.”