Researchers reveal chemical 'Tree of the Origins of Life' 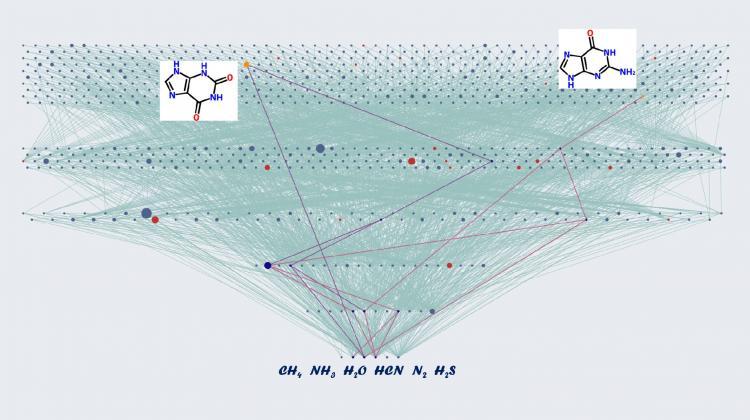 'Tree of Life' - a diagram showing chemical compounds that could have formed on the prebiotic Earth. Credit: Allchemy; Agnieszka Wołos.

Scientists at the Institute of Organic Chemistry of the Polish Academy of Sciences and UNIST in South Korea have developed a new algorithm to show how life on Earth evolved billions of years ago.

Using a software named Allchemy, professor Bartosz Grzybowski from the Institute and Dr. Sara Szymkuć who developed the software have identified a chemical ‘tree of the origins of life’.

Billions of years ago, before the first inhabitants appeared on Earth, only simple chemical compounds, such as water, nitrogen and methane, were present.

For decades, scientists have been trying to show how it was possible for these chemical compounds to evolve into a life species.

Attempting to systematize the knowledge, Polish scientists tracked chemicals that could actually be formed from several components that were most likely present on our planet.

Now, with the help of the Alchemy software, they are able to simulate chemical reactions occurring under certain conditions between given chemical compounds.

The team co-leader Dr. Sara Szymkuć said: “This time we harnessed the computer to help us understand how the molecules important for life were created.” 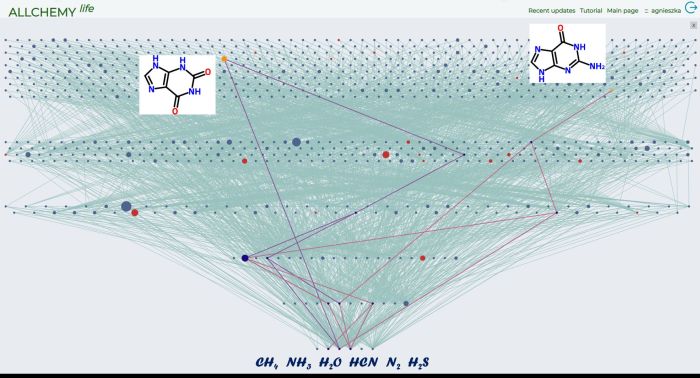 'Tree of Life' - a diagram showing chemical compounds that could have formed on the prebiotic Earth. Starting from the most basic and common substrates: methane, ammonia, water, hydrogen cyanide, nitrogen and hydrogen sulphide (the lowest row of the diagram), we obtain over 1000 chemical compounds in just five generations of calculations (consecutive reactions). The red nodes of the diagram are biotic molecules: nitrogen bases, amino acids, sugars. Two of them - xanthine and guanine - have been highlighted. Credit: A. Wołos.

Computer simulations also showed that these few steps alone are enough for compounds to appear that duplicate themselves.

A single chemical reaction is enough to produce 12 more compounds from the original six. If all the 18 compounds available are allowed to continue to react, 20 more chemicals can be formed. In the next step, 60 new compounds will appear, and then - as many as 300. After the fifth step of the reaction, there is a surprisingly rich base of 1,500 new substances.

Only two chemical reactions are enough to create the first amino acid - glycine. And if we allow 5 steps of the reaction to take place, we will create 27 chemical compounds characteristic of life (including uracil, the nitrogen base that one of the four nucleobases in the nucleic acid RNA).

Professor Bartosz Grzybowski said: “The reactions that could have taken place on Earth before life emerged were designed by the computer, and its indications told us which syntheses to perform in the lab and how to do it.

“This gives us further confirmation that machines are becoming increasingly useful tools in the study of chemical synthesis.”

He added: “Allchemy collects all the molecules that could have formed on the prebiotic Earth in one place. You can see what distinguishes the molecules chosen by life from all the others, of which there are many more.

“There is regularity in it. It is not a coincidence that these compounds were selected in the process of the chemical evolution of life.”

The researcher points out that molecules that are catalysts appear quite quickly on the 'chemical tree of the origins of life'; they facilitate the occurrence of further, completely new types of reactions. He said; “This tree has more and more branches with each step. It drives its own growth.

“When the whole tree is 'drawn', a computer can catch the first autocatalytic reaction cycles in the thicket of reactions - the cycles that lead to the copying of the original substance, its multiplication. So, the self-replication phenomenon that is so characteristic of life may have emerged at a very early stage.”

In their publication in prestigious journal Science, the scientists showed that one of these cycles works in a test tube.

They said: “In order for life to emerge, vesicles, simple organelles, had to form at some point. And for this you need surfactants that form the so-called micelles, components of the cell membrane. We have also shown how they can be made from prebiotic ingredients.”