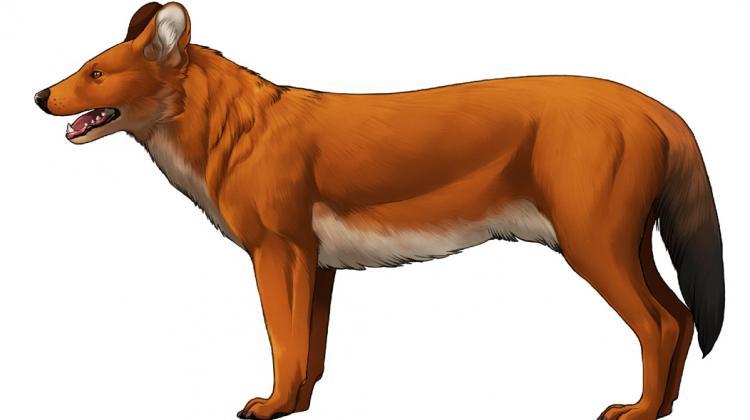 Scientists from the University of Wrocław have been investigating the lives of ancient predators roaming the plains of the Sudetes and surrounding Silesian, Czech and Moravian lands.

The team consisting of a palaeozoologist, a geologist, a geomorphologist and an archaeologist led by Dr. Adrian Marciszak, assistant professor at the Department of Palaeozoology, Faculty of Biological Sciences, University of Wrocław, discovered the region had a wide range of predators, from massive cave wolves to the huge Eurasian cave lion - the largest cat ever to live on Earth.

They also found that from the middle Miocene to the end of the Pleistocene, Silesia - considered within its historical borders - was palaeontologically the richest region of Poland.

Publishing their findings in Quaternary International, the authors of the publication say the region’s former wealth is evidenced by the discovery of the first remains of a dhole in Poland; its presence was confirmed in four caves in the Sudetes. It was the same animal that in Rudyard Kipling's The Jungle Book is referred to as 'the red dog of the Deccan', described by other animals and people as the most dangerous inhabitant of the forest that causes panic and death, and which even the tiger steers clear of.

Where did the remains of this species come from in the Sudetes in Silesia? And why doesn't this dog wander the vast Silesian land together with the wolf now? To understand this, you have to go back at least 800,000, maybe even a million years, until the time when the first dholes (Cuon priscus) appeared.

They appeared in Europe, the fauna of which did not resemble our present ideas about it. At that time, Europe was home to inexhaustible herds of large, hooved mammals called ungulates, which were food for numerous large carnivores. The period between 1 and 0.5 million years ago is known in palaeontology as the Middle Pleistocene Revolution (MRP). This is a time of complete reconstruction of fauna, the disappearance of old and the emergence of new species that over the next 100,000 years would form the European theriofauna we know today. During this period, the primitive dhole had a number of powerful competitors, including the scimitar-toothed cat (Homotherium) the giant short-faced hyena and the giant jaguar.

There were also large dogs. They were represented by a pair of species, the coexistence of which is evidenced by fossil records from about 2.2 million years ago. The dominant one was the large, massive Eurasian wild dog (Lycaon lycaonoides), equal in size to or larger than the largest modern-day wolves. It had short, wide jaws and a powerful set of teeth, which easily shattered the bones of its prey. In terms of lifestyle and hunting, it resembled today's wild dogs. Long, slender legs made it capable of long chases, after which exhausted prey was gutted and devoured. However, its larger size and a more massive structure (than in today's wild dogs) made it possible to hunt much larger prey, and additionally had a positive effect on competition with other predators.

Next to the mighty wild dog lived a small Mosbach wolf (Canis mosbachensis), which due to its slender build and small size was almost identical to the modern Arabian or Indian wolf. It adapted to changing conditions much more easily, but for about 1.5 million years it lived in the shadow of the dominant wild dog. The relationship resembled the wolf-coyote relationship in today's North America.

This was the setting the dhole, most likely an Asian immigrant, had to enter. With its size between the wild dog and the wolf, it adapted to life in mountain, forest and upland areas. Thanks to its compact figure and strongly muscled limbs, the massive, short-legged dhole moved and hunted efficiently in this environment. 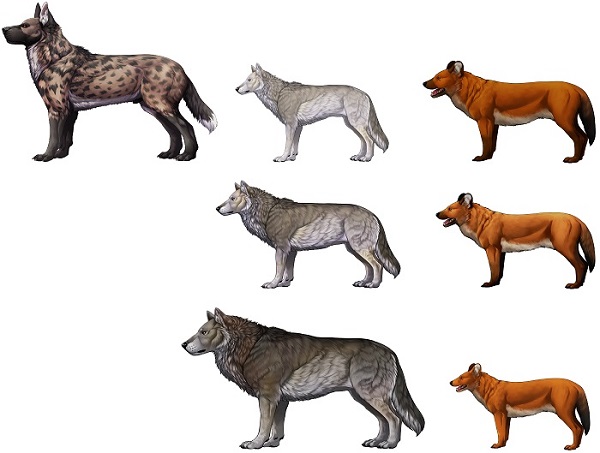 Comparison of body sizes of large dogs, whose remains were found in Silesian caves. Fig. Wiktoria Gornig. Description below the article

It lived in packs of up to several dozen individuals, and it made up for its relatively small size with cooperation. Not having the speed of a wild dog, it compensated with determination and persistence, literally chasing the prey to death. Fighting antelope or deer bulls were not always able to defend themselves with horns. While trying to hit the jumping attackers, the hoofed victims died as the remaining members of the pack quickly delivered the coup de grâce with their sharp teeth.

The dhole functioned quite well in the new environment, as evidenced by the increasing number of sites with its remains. The wild dog dominated the open lands, while the dhole preferred forests, mountains and highlands. The Mosbach wolf co-existed in all these environments, trying to minimize competition with other dogs (avoiding them or choosing an environment less suitable for them).

Currently, the dhole and the small Indian wolf coexist quite well in Southeast Asia, and cases of aggression between them are rare. The dhole and the Mosbach wolf, which had similar body sizes, probably had a similar relationship. The wild dog-dhole relationship is more difficult to reconstruct; it can be assumed that the wild dog had a negative impact on the wolf population. Much more numerous, but also smaller, wolves could be killed or driven away from prey by wild dogs.

This continued until approx. 900,000 years ago, when two new, social and intelligent predators of African origin appeared in Europe. Over the next half a million years, they completely rebuilt the fauna of predatory mammals. The first to appear was the cave hyena, which (about 700,000 years ago) quickly led to the extinction of the giant short-faced hyena. Shortly thereafter, the huge Eurasian cave lion appeared - the largest cat ever to live on Earth. It was as big as a bear, with males of the species reaching an unbelievable weight of 600 kilograms. It completely dominated the European theriofauna. The lion quickly led to a drastic decline in numbers and an almost complete disappearance of the scimitar-toothed cat (Homotherium). Interestingly, this species survived in the North Sea region until approx. 26,000 years ago, but as a complete rarity and not a significant part of the fauna. As if that were not enough, it was also the time of the appearance of the first Acheulean hunters in Europe.

This period was also a time of dynamic climate changes and extensive glaciation, of which the most important was the South Polish glaciation, correlated to MIS 12. It covered a large area of Europe, including almost the entire today's territory of Poland, based on the curve of the Sudetes and Carpathians.

Before this glaciation, the wild dog was common in most of Europe, but later its presence was recorded only on individual sites. Probably during the MIS 12 period, the influence of the harsh climate, reconstruction of the ungulate fauna and, above all, the increasing competition from the cave hyena and the cave lion, resulted in a drastic reduction in the number and range of the wild dog. This disrupted the fragile balance between predators and a certain critical point in the wild dog-wolf relationship was crossed. Probably between 450 and 400,000 years ago, the wild dog was too rare to be a real competition and a limiting factor for the wolf. It was also the time when the wild dog completely disappeared from Eurasia and its remains from sites younger than 400,000 years are not known. As soon as the wild dog disappeared from the Eurasian nature, we observe a sharp increase in the numbers and size of the wolf.

The period between 400 and 320 thousand was a time when the dhole and the wolf were still close in body size, though that was changing rapidly. In a short time, the wolf reached the size known today, and packs grew to several dozen individuals. The wolf became the dominant dog in Eurasian ecosystems and filled the niche previously occupied by the wild dog.

In Central Europe, on the vast Czech, Moravian and Silesian plains, dominated by numerous packs of large, massive cave wolves, there was no place for the dhole. We know its presence from that period from highlands and mountains, such as the Polish Jura, Moravian Karst or Sudetes, where the number of available hiding places made it possible to avoid the pressure of the wolf. Ultimately, however, the dhole disappeared from central Europe before the last maximum glaciation, around 32-30,000 years ago.

Its presence is no longer recorded in any of the cave or open sites, be it in Czechia, Moravia or Silesia, where the number of wolf remains reaches several thousand in each site. It is a clear proof that the dhole was no longer present in the Silesian fauna during this period. In Europe, it survived much longer, remaining in the Apennine and Iberian peninsulas until the beginning of the Holocene, to finally disappear about 9-8.5 thousand years ago.

A curious fact: when hunting, modern dholes often first attack and bite out the eyeballs of their prey to it them and speed up the killing process.

Due to the lower body than a wolf or a lion, the dhole is a target that is more difficult to hit with a hoof, antler or horn in a fight against a defending prey.

The author of the text is Dr. Adrian Marciszak

assistant professor at the Department of Palaeozoology