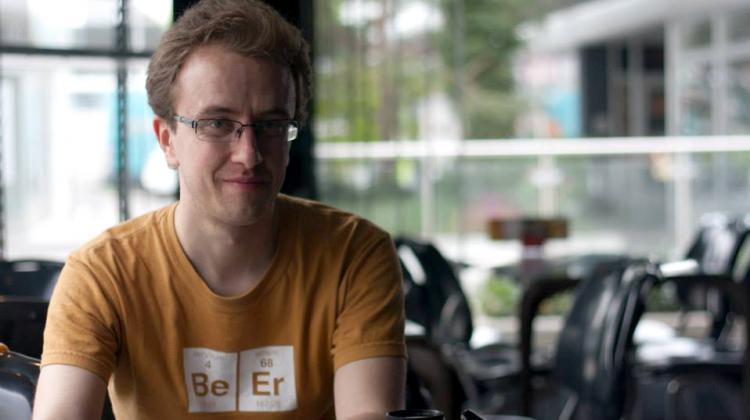 In an interview with PAP, astrobiologist Dr. Janusz Pętkowski from MIT who is one of the scientists to discover phosphine in Venus's clouds, says: “Either we do not understand the chemistry of rocky planets, or we have the first potential suggestion that there is life in the clouds of Venus.”

PAP: What have you found?

Dr Janusz Pętkowski from Professor Sarah Seager's research group at the Massachusetts Institute of Technology: “A team of scientists led by Jane Greaves from the University of Cardiff - myself included - discovered the presence of phosphine in the atmosphere of the planet Venus. More precisely in the clouds, at an altitude of about 55 km above the surface of the planet. The study appeared in Nature Astronomy.

PAP: What is phosphine?

JP: It is a gas consisting of one phosphorus atom and three hydrogen atoms (PH3). The discovery of this compound in the clouds of Venus is unexpected because at the moment we do not know any processes that would produce this gas (for example in geological processes or in the atmosphere) on rocky planets such as Venus or Earth. We know that on Earth, phosphine is produced exclusively by life or by industrial processes.

PAP: Where is phosphine produced on Earth?

JP: It is produced by anaerobic organisms that live in a completely oxygen-free environment: in swamps, wetlands, or even inside our digestive system. Phosphine is also a product of industrial processes.

PAP: So what does the discovery of phosphine on Venus mean?

JP: There are two possibilities. One, phosphine on Venus is produced in completely unknown physical, chemical, geological or photochemical processes. Or we are dealing with the possibility that there may be life in the clouds of Venus. Both of these variants are unbelievable! Either we do not understand the chemistry of rocky planets or we have the first potential suggestion that life is possible on Earth's neighbour planet.

PAP: Does it mean that you discovered life in the clouds of Venus?

JP: No, this is not the final proof that life exists. But this is a suggestion that there are processes in the atmosphere of our neighbouring planet that we do not understand. One possible hypothesis that would explain these processes is life.

PAP: What exactly does the hypothesis you present involve? That there are some microorganisms floating in the clouds of Venus?

JP: Even if we assume that phosphine is related to the presence of life, for now we could not say what this life looks like and what it is. We only detected a possible product of metabolism of living organisms. If it turns out that this is life, it must function only in the atmosphere, in the clouds, possibly without contact with the surface of a planet that is too hot. The surface temperature of the planet is around 465 degrees Celsius. But it is unknown how such life would function and whether they are microorganisms. The only way to find out is to fly  to Venus and study cloud samples.

PAP: Tell us more about these Venus clouds!

JP: On Earth, clouds are made of water. Cloud composition on Venus is 85 percent. Sulphuric acid and 15 percent water.

JP: Yes, for us, Earthlings, it is unthinkable. Even the most extremophilic bacteria living on Earth would not be able to survive in such an environment. But sulphuric acid is a solvent, a liquid. And the presence of some liquid is essential for life to exist. We do not know if any life is capable of existing in such a high concentration of sulphuric acid.

PAP: If life exists on Venus, it is a poor life...

JP: If it turns out that there is life in the clouds of Venus, this life would have to be completely different than what we know. In theory, however, one could build a biochemistry compatible with sulphuric acid. After all, you can imagine that life on Earth is unthinkable for other forms of life, with so much oxygen that it oxidizes everything. But we have adapted. Oxygen is not our enemy as it was 3 billion years ago. And it has become a necessity for us. Could a similar situation have happened on Venus, with sulphuric acid becoming essential to life? We do not know, but we can wonder.

PAP: But hypothetically, where would life in the clouds of Venus come from?

JP: There are Venus climate models that suggest that Venus looked like Earth for billions of years. For example, it had oceans of liquid water, rivers, lakes. About 700 million years ago, there was a cataclysm that changed Venus into the +hell planet+ we know today. The question is whether any life could have survived that cataclysm. In the clouds, at least in terms of temperature, life could survive. In the clouds on Venus, at an altitude of 55 km, temperatures are between 20 and 60 degrees Celsius, so it would be much easier to survive there.

PAP: Could phosphine be a trace of life that existed on Venus millions of years ago?

JP: No, phosphine is a reactive gas, it is destroyed photochemically in the atmosphere. The fact that it exists there means there must be a process going on there that is still producing it. Phosphine must be constantly replenished in the planet's atmosphere.

PAP: Is phosphine evenly distributed in the atmosphere? Or has it been found in a specific area of Venus?

JP: The presence of phosphine was confirmed by the observations of two telescopes: the JCMT telescope in Hawaii and the ALMA telescope in Chile. The JCMT was able to determine the altitude, at which the gas was present in the clouds, and ALMA additionally determined that phosphine was present in a belt geographically analogous to our temperate climate latitudes. So gas is not produced at Venus's poles. We do not know the reasons for this distribution of phosphine in the atmosphere of Venus. So you can imagine that if there is life in the clouds there, it prefers moderate latitudes for some reason.

PAP: Phosphine has a simple chemical formula: PH3… It doesn't sound like a complicated chemical to produce.

JP: Only at first glance. This gas was previously discovered on Jupiter and Saturn. They are, however, huge gaseous planets. And there are three conditions that facilitate phosphine formation: high pressure, high temperature, and very large amounts of hydrogen. These are conditions that do not exist simultaneously on planets such as Venus and Earth. We have no idea how phosphine could form on such rocky planets. On Earth, it is produced by life. Is that also true on Venus? We do not know.

PAP: Were you looking for phosphine, or did you find it by accident?

JP: We have been dealing with phosphine at MIT for several years. We studied its properties and wondered how to detect it on planets far away from us. We did not even imagine that this gas could be present so close to us, on a neighbouring planet. Jane Greaves, in turn, was looking for gases in the objects of the Solar System that would not match the local chemistry and could be signs of life. One of them was phosphine. Jane Greaves aimed a telescope at Venus and it turned out phosphine was there. Our groups joined forces and we were able to present the hypotheses about the presence of phosphine.

PAP: Have there been any suspicions that there may be life on Venus?

JP: The discovery of phosphine adds another mystery to the list of mysteries of this planet. The first mystery is that this planet may have looked like Earth for billions of years. The second mystery, which has been known for years, is that in the clouds of Venus there is a chemical compound that absorbs 50 percent of UV radiation that hits the planet. Nobody knows what compound blocks light. People have even started speculating that it might be some sort of pigment needed to carry out photosynthesis in clouds. This is still unknown. And now we added the secret of the origin of phosphine (that does not absorb UV radiation) to the list of Venus secrets. This list suggests that there could still be life on Venus.

PAP: This means that it will probably be worth sending a probe that will investigate the possibility of life in the super-acidic clouds of Venus.

JP: It is necessary. Without it, we will not be able to confirm where the phosphine in the atmosphere of Venus comes from. Is it geology or is it life? However, if we want to study Venus, planetary protection is important. We do not want to bring life from Earth to Venus during our research, or accidentally bring life from Venus to Earth. (PAP)