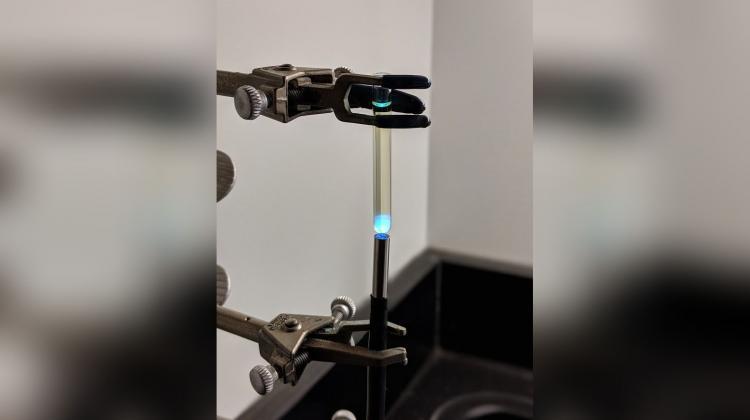 Credit: Grzegorz Szczepaniak / Carnegie Mellon University The new ATRP method works in an open reaction vessel, in both water and organic solvents, and enables obtaining polymers with great control and in a short time.

Polymer particles of any architecture, e.g. combs, stars, rings, have been produced for years thanks to the groundbreaking ATRP method discovered by Professor Krzysztof Matyjaszewski. Now scientists show how to carry out such reactions even more easily - in the presence of oxygen, in homelike conditions.

Polymers are everywhere you look. They are used to manufacture packaging film, plastic bottles, cable insulation, fleece and nylon clothes, PVC floors and modern nail polishes. Polymers also include Teflon used to covers frying pans and Kevlar, known from bulletproof vests. But they are not only plastics. Polymers also include nucleic acids that make up our genetic code, as well as proteins that build the body.

“Our goal is to produce tailor-made polymers,” says Professor Krzysztof Matyjaszewski from the Carnegie Mellon University (CMU) in the US. Twenty-five years ago, the research team developed the groundbreaking ATRP (Atom Transfer Radical Polymerization) method. This method enables super-precise production of polymers with predetermined architecture. Thanks to this discovery, the Polish researcher received the Foundation for Polish Science Prize (2004), the Wolf Prize (2011), and the Benjamin Franklin Medal (2017), and every year he is named among the world's top Nobel Prize candidates. He is one of the most cited Polish chemists.

“Imagine that enlarged polymers look like tens or hundreds of meters long bead necklaces,” he says, adding that thanks to ATRP, it is possible to precisely design what a string of such beads will look like, which colours will follow one another, where and how the string will branch, what shape it will have and where the most valuable beads will be placed.

This makes it possible to create polymers in the shape of combs, rings, stars, trees or entire networks. If the shape and composition of the polymer are properly designed, it acquires the desired physical and chemical properties. Therefore, it is possible to design, for example, polymers which, under the influence of specific stimuli, expand or contract, organize themselves or repair damage. They can be super-soft, extremely hard or, for example, have a very low coefficient of friction. Matyjaszewski says that 17 companies have already been granted licenses to use the ATRP reaction.

How does ATRP work? During normal radical polymerization, successive beads are attached to each other at a frequency of one millisecond. This means that a chain of one thousand beads is formed in one second. At this speed, it is difficult to precisely control what is happening. “And we figured out how to make a pause, say, one minute long, after each bead. So what used to happen in one second is extended to several hours. During this time, you can carefully choose the beads,” says Professor Matyjaszewski.

The problem until now was that the ATRP reaction had to run under strictly anaerobic conditions. The presence of oxygen in the environment prevented polymerization. Therefore, the polymers were prepared in special gloveboxes or with the use of vacuum lines, and it was necessary to deoxidize all components before the reaction. “It was troublesome. We wondered if there was an easier way to do it,” Matyjaszewski explains.

Now, researchers from his team have found a way. Only a few ingredients are needed: sodium pyruvate in combination with a small amount of copper catalyst and UV light. They make it possible to remove oxygen from the reaction mixture. The study was published in Chemical Science https://doi.org/10.1039/D0SC03179H

“Thanks to this, instead of carrying out the reactions in isolated systems, it can be done in an open vessel, on an ordinary table. You only need a simple reaction vessel, such as an ordinary glass vial or glass, in which all the necessary ingredients should be mixed. Thus obtained ATRP cocktail is illuminated with UV rays for half an hour and it's ready,” says Professor Matyjaszewski.

Dr. Grzegorz Szczepaniak from CMU and the University of Warsaw, who participated in the discovery (research under the Mobility Plus scholarship from the Ministry of Science and Higher Education), said: “This reaction can even be carried out in a kitchen.” He added that in addition to pipettes and vials, a LED strip or a UV lamp will also be useful in the experiment, but obtaining it is not a challenge. Such lamps are used, for example, in nail salons to harden nail polish.

He said: “When there is no light, the reaction stops and goes into a dormant state. And when the light is turned on, the reaction resumes. This way you can turn polymerization on and off.” (Only in the presence of UV light, pyruvate can regenerate the copper catalyst, which is oxidized by oxygen in the air to an inactive form).

Since the ATRP reaction can now be easily carried out in the presence of oxygen, the costs of polymer production will decrease, because you do not need to use sophisticated equipment. This also means that this new method of polymerization can be used by researchers who are not experts in the field. In this way, anyone who needs advanced tailor-made materials will be able to easily obtain them in their laboratory (it does not necessarily have to be a polymer chemistry laboratory). In addition, an experiment that is not sensitive to oxygen and can be performed in aerobic conditions, it is more reproducible because there is no risk that a small amount of oxygen may disrupt it. Another advantage of the new ATRP method is that it makes it possible to obtain polymers in a short time, which facilitates and accelerates the process of discovering new materials.

Dr. Szczepaniak says that thanks to the new possibilities of carrying out ATRP in the presence of oxygen, both in water and in organic solvents, it will be possible, for example, to easily obtain hybrids composed of polymers and DNA, or polymers and proteins. And those can be useful, for example, in the development of drugs that would be more stable or could be delivered in a controlled manner to selected cells or tissues.

In the next stage, scientists want to check how to carry out the reaction in light other than UV, for example blue, green and infrared radiation, which would have less impact on cells or enzymes, but more easily penetrate various types of materials.

In addition to Professor Krzysztof Matyjaszewski and Dr. Szczepaniak, the authors of the publication in "Chemical Science also include other Polish researchers: Matylda Łagodzińska (University of Oxford) and Dr. Adam Gorczyński (Adam Mickiewicz University in Poznań).