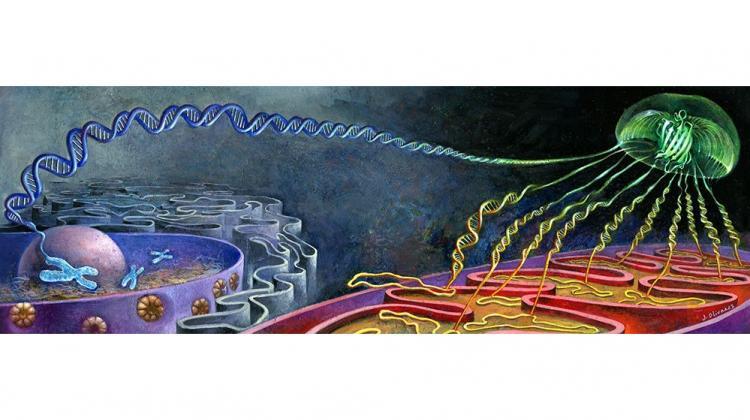 A metaphorical painting by artist Jaime Olivares illustrates how glow is produced in the Bi-Genomic Mitochondrial-Split-GFP method. A fragment of the glowing jellyfish protein GFP1-10 produced in yeast mitochondria is needed, as well as a GFP11 fragment produced together with the tested protein in the cytoplasm. If such a protein reaches the mitochondria, two GFP fragments self-organise to form the glowing GFP protein.

Scientists from a Polish-French-Swiss team have developed a method to use fluorescence to visualize the mitochondrial pool of proteins found in different places of the cell. The researchers have created a yeast strain, the wide use of which will make it possible to understand how mitochondria - the cell's power plants - work.

Mitochondria, whose tasks include the production of cellular energy (in the form of ATP), are organelles of bacterial origin. They have their own DNA that encodes a few to a dozen proteins. The vast majority of the proteins they need to function (1000-1500, depending on the organism), are encoded by DNA in the cell nucleus and formed in the cytoplasm. From there, they go to the mitochondria.

Biologists and chemists use fluorescence to locate proteins in the cell. By means of genetic engineering, a fluorescent protein is attached to the protein of interest to scientists. This marker makes it possible to see the fluorescence signal under the microscope in the place where the protein of interest is. One of such markers is GFP (Green Fluorescent Protein) isolated from jellyfish.

“However, if a protein we observe is located in the cytoplasm, the entire cell glows green under the microscope,” says Dr. Róża Kucharczyk from the Institute of Biochemistry and Biophysics of the Polish Academy of Sciences.

“It is then difficult to see whether the protein is also present in other organelles, for example in mitochondria, because light from the cytoplasm interferes with the signal from mitochondria.”

Numerous studies have shown that approx. 30 percent of mitochondrial proteins are found both in the mitochondria and in another compartment of the cell, for example in the cytoplasm or the nucleus (these are called dually localized proteins).

And since there has been no clear and reliable method to isolate pools of a given protein in different parts of the cell, there are still many unknowns concerning the functions of these proteins.

The S. cerevisiae yeast strain with a modified mitochondrial genome developed by the researchers will allow to observe only the fluorescence signal of the mitochondrial protein fraction. This signal will form only when the observed proteins have already found their way into the mitochondrion.

The results of the Polish-French-Swiss team's research have been published in the prestigious journal eLife.

Dr Kucharczyk, author of the publication, explains that the team used the Split-GFP system. The GFP protein molecule was separated into two non-fluorescent fragments: the first 10 β-strands of the GFP (GFP1-10) and the last 11th β-strand (GFP11). Only their combination gives a fluorescence signal.

So far, in order to visualize mitochondrial proteins, researchers have used the GFP1-10 fragment, to which a signal directing it to the mitochondria was attached. The second, the missing GFP11 fragment was attached to the tested proteins. Both fragments were synthesized in the cytoplasm. For this reason, the completion of the GFP molecule and the fluorescence signal often occurred before the GFP reached the mitochondria.

To overcome this problem, the team created a yeast strain with a gene encoding the GFP1-10 protein fragment added to the mitochondrial DNA, causing it to be produced in the strain's mitochondria. Thus, the synthesis of both GFP protein fragments is physically separated from each other. This eliminated the problem of obtaining a non-specific fluorescence signal that exists in the current methods of studying the localization of mitochondrial proteins using both GFP fragments. An additional, equally important advantage is the visualization of only the mitochondrial pool of the studied protein.

When the protein under study (along with the GFP11 fragment) reaches the mitochondrion, the second part of the 'jellyfish' protein binds to it. And only then fluorescence occurs. In other cell organelles, one piece of the puzzle (GFP1-10) is missing, so they remain dark. And they do not distort the results of the experiment.

This tool allowed the authors of the study to prove the mitochondrial localization of proteins previously considered to be exclusively cytoplasmic; it will also enable significant advances in the analysis of mitoproteomes.

The yeast strain developed by the researchers could serve as a screening platform for mitochondrial 'import' of proteins from yeast as well as from plants and humans.

Dr. Kucharczyk hopes that in the future it will be possible to develop this idea to separately visualize proteins from the mitochondrial matrix and those from the space between mitochondrial membranes.

She also hopes that in the future, it will be possible to create a strain that will allow to visualize the pools of a given protein in different organelles at the same time, each glowing in a different colour. A different colour would therefore be assigned to the cytoplasmic fraction, a different one to the mitochondrial fraction, and yet another to the vacuolar fraction (the team has already started work on Split-GFP for visualization of vacuoles).