Two axes from the Battle of 1410 found near Grunwald 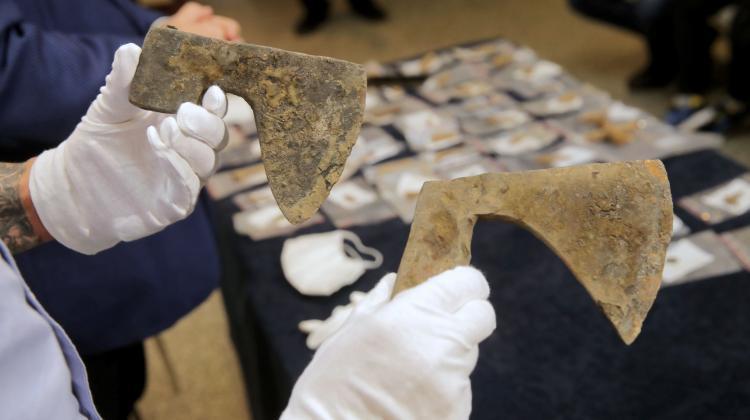 Battle axes presented at the press conference on the finds from this year's search in the fields of Grunwald, May 29, at the Museum of the Battle of Grunwald in Stębark. Detectorists and archaeologists searched nearly 60 hectares of fields around Grunwald. The finds include two well-preserved battle axes used in the greatest medieval battle of 1410. The find is dated to the 15th century. PAP/Tomasz Waszczuk 29.08.2020

Two well-preserved medieval battle axes and several dozen other artefacts have been found during archaeological work at the site of the Battle of Grunwald.

The axes, described as an archaeological sensation, would have been used in hand-to-hand combat and are in such good condition that they even have the rivets that attached them to the hafts.

Director of the Museum of the Battle of Grunwald, Dr. Szymon Drej said: “In seven years of our archaeological research, we have never had such an exciting, important and so well-preserved find.

“The context of these finds, preliminary dating to the 15th century and the typology of axes clearly indicate that they are directly related to the Battle of Grunwald of July 15, 1410.”

In addition to the axe heads, the 70 archaeologists involved in this year’s search found the fragment of a medieval short sword along with dozens of arrow and spearheads.

The exact location of the most recent discoveries is being kept secret as researchers believe it could be the site of many more artefacts.

Past seasons have uncovered over 1,500 artefacts, of which at least 150 can be directly linked to the battle of 1410. These are mainly pieces of offensive and defensive weapons, arrow and quarrel heads, pieces of swords and knights' belts, horse spurs and Teutonic coins.

The most valuable find to date has been two Teutonic clasp with the Gothic inscription 'Ave Maria', used to fasten coats, and a medieval seal with the image of a pelican feeding its young with blood.

According to the museum, by comparing the locations of these finds with the map of the area they were able to confirm that the Teutonic camp had been located in the place where the post-battle chapel, consecrated in 1413, was built on the order of Grand Master Heinrich von Plauen. It also helped determine the location of the main battle, not on the Stębark - Łodwigowo line, as it was previously believed, but closer to the village of Grunwald.

A secret still waiting to be discovered is where the knights killed in one of the greatest battles of medieval Europe were buried in mass graves. So far, burial sites have only been found inside and near the ruins of the battle chapel. During archaeological excavations in the 1960s and 1980s, bones of around 300 men were discovered, but several thousand died during the battle.