Exploring the limits of consciousness. How does the brain perceive own name? 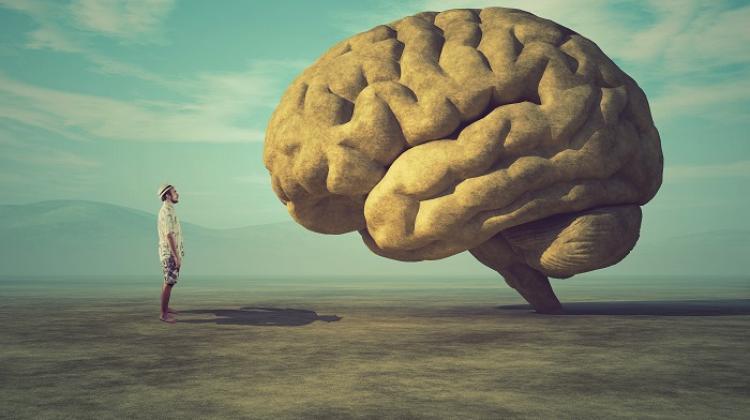 When you see a picture of our your face, hear your name or see it written down, the brain receives an important signal. Knowing how such stimuli are processed may help better understand the phenomena bordering on consciousness and unconsciousness, Polish researchers show.

Even in a noisy room where a lot of people talk at the same time, a person is able to pick up their name, even if it is dropped somewhere far away in a quiet conversation. They can hear it even though they have not understood any other words in that conversation. This is called the cocktail party effect - known for decades - that shows how important it is for each of us to process stimuli about ourselves.

I - THE MOST IMPORTANT PERSON IN THE WORLD

“Even children who are several months old have a preferential reaction to their name. They hear it many times a day and it is usually associated with some stimulus. So from childhood, people learn to react to their name,” says Dr. Michał Bola from the Nencki Institute. The importance of these stimuli is clearly visible in the study of the brain.

Łucja Doradzińska, a PhD student from the Nencki Institute, adds: “The name is a unique stimulus for the brain. It activates the concept of +I+.” She adds that the brain also preferentially treats other stimuli from this category, such as a photo of one's own face or an inscription with one's own name.

Dr. Bola talks about studies, in which subjects were shown geometric shapes: circles, squares, triangles, and asked to treat triangles as symbolizing themselves and circles as other people in the experiment. It turned out that when triangles appeared on the screen, it caused a stronger brain reaction in the subjects. Thus, even the arbitrary assignment of the association 'triangle = I' was enough to awaken the subjects' thinking about themselves. The fact that the name is important to us is not only due to our familiarity with it, but rather because it refers to the concept of 'I'.

Since the stimuli related to the name are treated so preferentially when we notice them consciously, scientists from the Nencki Institute also decided to check what would happen if these stimuli were presented subliminally. The research financed with grants from the National Science Centre was published in the journal Neuropsychologia

As part of the experiment, neuroscientists showed the subjects different names. They displayed the names on the monitor screen for a very short time, 32 milliseconds, so it was like a blink as long as a single video frame. Despite such short display times, the subjects were able to read the presented names without any problems.

GIF: The name 'Tomasz' is displayed for 32 milliseconds. A nonsensical set of characters (called a mask) is displayed before the name, but not after it, so the name is quite easy to read. Credit: Ł. Doradzińska, M. Bola

Then the task difficulty was increased. The name was still displayed for a split second, but followed by the so-called mask, meaning a nonsensical set of characters, e.g. @#X%&X%@&#. “If information appears for a while, the brain can process it effectively. But if another stimulus appears after it, in this case a mask, the brain overwrites the previous information. This phenomenon is the basis of a well known masking technique that makes it possible to display subliminal stimuli,” explains Dr. Bola. It turned out that the mask indeed meant that the subjects were no longer able to say that they had seen their name.

But something else seemed to result from the work of their brains. After displaying and masking the subject's name, extensive brain activation (known as P3b) was observed. This activation involves many areas in the brain and occurs several hundred milliseconds (ms) after the stimulus occurred (i.e. after the text has disappeared).

GIF: After the name displayed for 32 ms, a meaningless set of characters called a mask is displayed and it is actually impossible to read the name. But if the name of the reader is Tomasz, perhaps this blink of the name was enough to generate the so-called P3b brain stimulus, until now associated with consciousness. Credit: Ł. Doradzińska, M. Bola

“Until now, this very strong signal has been interpreted as evidence of the stimulus' access to consciousness,” the researchers explain. Meanwhile, although their brains reacted strongly, the subjects were unable to tell what they saw. This means that their consciousness did not receive information that they saw their name.

“We show that since subliminal stimuli can trigger such strong brain activation, perhaps this P3b activation is not the same as the consciousness mechanism,” the researchers say.

Human responses to a wide variety of stimuli have already been subject to EEG study. Usually, brain activation occurred in response to a consciously registered stimulus. And when the stimuli were subliminal, those activations did not occur.

“And we show that perhaps in this mass of various stimuli there are special stimuli, ones so important that they can cause extensive activation, but not yet consciousness,” says Łucja Doradzińska. She adds that stimuli related to 'I' can be such stimuli.

Dr. Bola says that in future studies, he and his team want to investigate other stimuli important for people, for example photos of faces expressing strong emotions, such as fear or anger - and check what the brain does with them when it is not yet aware of them.

“We want our research to give an impulse to consider which mechanisms are inherently associated with consciousness, and which ones - not necessarily,” he says.