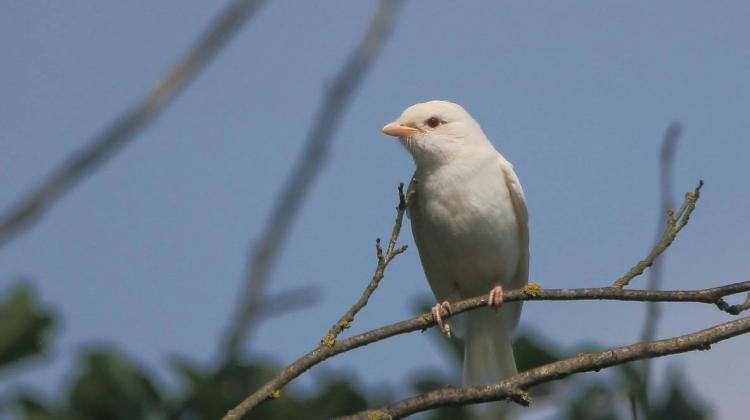 Spotted blackbirds and jackdaws are sometimes observed and photographed by professional bird watchers or curious passers-by. They are more often observed in cities than in the countryside. For the first time in the world, researchers from Poland and the Czech Republic describe the phenomenon of colour aberrations on a wide scale, analysing nearly a thousand cases concerning 74 species.

The scientists used online data sources in the form of posted photos and videos of unusually coloured birds. They searched its resources using Google Images, they also collected photos directly from observers and bird lovers from Poland. Such tools are increasingly used in ecological and evolutionary research. The initiator of the research was Adam Zbyryt from the Polish Society for the Protection of Birds (PTOP), and the approach itself is another step in the development of civil science, making it possible to significantly reduce costs and increase the intensity of data collection.

Zbyryt said: “Aberrant plumage colourations in birds differ significantly in terms of their formation mechanisms and phenotypic appearance. Their study was not intended to identify the presence of specific types of colour aberrations in birds, but rather to investigate the relationship between the absolute occurrence of aberrant colouration and the life history and ecological characteristics of the species. Moreover, many colour aberrations are difficult to identify on the basis of photography, and several types are rare, which makes analyses related to specific types of aberration difficult.”

Birds with unusual coloration have been recorded in many parts of Poland, but are most common in and around large cities. Aberrant colouration was found primarily in corvids, blackbirds and sparrows. The number of found atypically coloured birds turned out to be higher in the case of species with larger breeding populations in our country, with higher body weight and those associated with human settlements. Aberrant colouration was also more common in species that do not migrate over long distances and inhabit a wider range of habitats, most often open ones, the authors conclude.

They suggest that the more frequent occurrence of abnormally coloured birds in the urban environment may be due to two factors: firstly, more people documenting their observations; second, the living conditions in this environment that favour mutations. Despite the actual greater concentration of observers in urbanized areas, this result seems probable, as noise, environmental pollution and 'junk' diet may affect disorders related to the formation of pigments. The greater proportion of large bird species may be due to the fact that they are spotted more easily. In addition, large species inhabit cities more often and in practices - like all larger animals - are popular with humans. In addition, birds of medium to large body size tend to live longer, which can more often lead to an accumulation of mutations and progression of aberrations such as greying, a process - as the name suggests - resembling a change in human hair colour. The greater share of sedentary birds is probably the result of migrants avoiding large human settlements and the fact that they spend less time on the breeding grounds.

Researchers suggest that the phylogenetic clustering of aberrant colouration in some lines may indicate a strong biological basis for the phenomenon of atypical colouration. A large share of birds with colour aberrations often found in cities, such as jackdaws or hooded crows, may confirm this, because other corvids, usually living outside human agglomerations, such as ravens and jays, appeared very rarely during the research. A similar phenomenon was observed in the case of blackbirds and fieldfares, typical city birds, which were represented in large numbers in the photos, and other, forest species of thrushes, which were virtually not recorded.

The study clearly shows that some species' features are associated with the frequency of reporting feather aberration in birds. It also indicates that data collection bias may be ubiquitous in studies of unusual coloration of birds and other animals. Aberrant colouration is more often documented for species that are more likely to be detected and attract more attention, a problem long recognized in science. This makes it difficult to estimate the true frequency of aberration among wild animal populations, the authors of the study write.

The researchers said: “The research results once again underline the role of modern technologies and information applications in the rapid and effective collection of data on animal biology and ecology. However, the use of such data is not appropriate for all research questions, and its inclusion in environmental and evolutionary research must be done carefully, knowing both the potential advantages and the pitfalls.” (PAP)