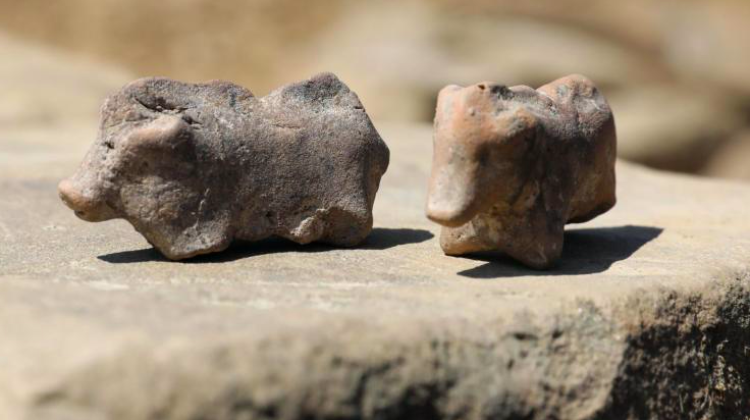 Presentation of the archaeological find in the form of 3.5 thousand years old pig figurines, August 13th, Maszkowice (Małopolska). This is quite a rare find. The settlement where the discovery was made is surrounded by a stone wall, which is unique for settlements from this period in this part of Europe. (kf) PAP/Grzegorz Momot 13.08.2020

Two clay pig figurines dating back 3,500 years have been discovered during excavations at a Bronze Age house in a settlement surrounded by Europe’s oldest monumental stone wall.

The discovery by archaeologists on Zyndram's Hill in Maszkowice (Małopolska) has been hailed as a rare find as they are the first of their kind.

Research leader Dr. Marcin S. Przybyła from the Institute of Archaeology of the Jagiellonian University said: “These are the first such find of zoomorphic figurines, that is, ones depicting animals.”

He added that the artefacts are small, only a few centimetres long, but very carefully made, with anatomical features, including nipples.

One is brighter, pale brown in colour, the other was fired to be quite dark. In the case of the latter, the animal's nose is brighter. According to the archaeologist, this is probably accidental, but thanks to this the figurine becomes even more realistic.

He said: “There is no discussion as to what kind of animal it is. You have to remember that pigs back then looked more like wild boars than modern-day domesticated pigs.”

Each of the figurines was made in a slightly different style, in a different manner, as if they were made by two different people.

The figurines were inside the relics of a hut, just a metre apart.

The discovery was made in a residential house from the early Bronze Age (approx. 3,500 years old). There were many animal bones (of pigs, cattle and predators) in the building, clearly more than in other structures identified so far within the fortified settlement.

The arrangement of post-pits, whose task was to support the roof, was also surprising - three of them were right next to each other.

The house was probably rectangular or square (the size of a typical cottage in this place is 6 by 6 m or 8 by 6 m). Its walls were made of a lightweight braided structure covered with a thick layer of clay. The wall could be about 20 cm thick.

According to Przybyła, the figurines could have been used as children’s toys or cult objects.

Archaeologists are continuing restoration work within the walls of the settlement which was discovered a few years ago.

Dr. Przybyła said: “The fortifications defending the settlement are more than two and a half thousand years older than the monuments of Romanesque architecture. Thus, it is the oldest example of a stone wall in the history of construction in Poland.”

This year's research shows, among other things, that the walls were built on large, flat sandstone slabs (approx. 1.6 m long), which formed a perfectly flat surface. According to the researcher, they look like screed and it is clear that the fortifications were made in a very thoughtful way, and the builders had experience in similar projects.

Equally old stone structures are not known in this part of Europe. Researchers are convinced that the know-how associated with their construction came with settlers from the Mediterranean or the Adriatic zone. Further evidence of this are the discovered fragments of ceramic vessels. Their forms indicate contacts with the communities living in the middle Danube basin.

According to researchers' estimates, the settlement was suddenly abandoned ca. 1550-1500 BC. However, there are no traces of an invasion or disaster. While there was a large fire more or less in the middle of its functioning, the wooden houses were later rebuilt. They were larger than the previous ones, but fewer of them were erected.