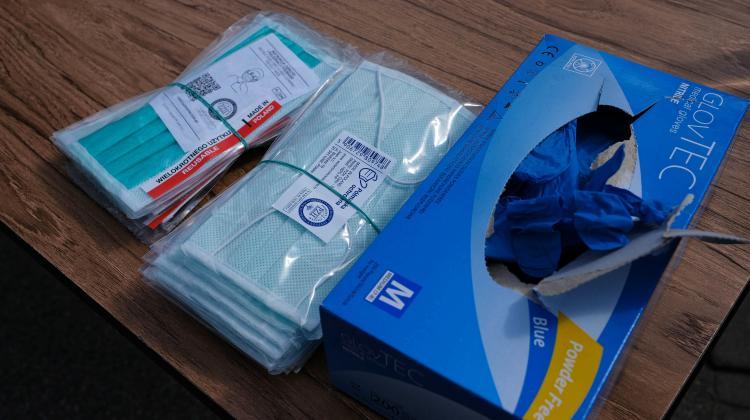 Disposable masks and gloves made of polymers would be difficult to replace in hospitals, but on a daily basis ordinary cotton masks are enough for protection, says a materials expert from AGH UST.

Piotr Szatkowski from the Department of Biomaterials and Composites at the Faculty of Materials Science and Ceramics of the AGH University of Science and Technology explains that anti-infection face masks are made of polypropylene, thin fabrics made of plastic. The string around the ear is made of polyester, and the metal part that makes it easier to put the mask on the nose is hemmed or hot-glued copper wire.

Polymers are plastics with such excellent properties that it is not really viable to produce various parts from other materials. They are light due to their low density and can form impermeable films. They are fibre-forming, and fibres can be successfully used to make fabrics.

He said: “Plastics and polymers have strongly pushed medicine forward. Today it is difficult to imagine health care and hospitals without disposable materials and the possibilities offered, for example, polyvinyl chloride bags for blood storage. When reusable items were used, there were more infections, the problem of disinfection and sterilization appeared.”

Disposable materials used by hospitals are not a big problem for the environment. All medical waste is incinerated. Waste incinerators do not emit toxic substances into the atmosphere, although carbon dioxide is released, and the rest of the residue is ash, most often in the form of oxides.

He said: “An incinerator is not a door and a coal firebox into which garbage is thrown. In a high-energy incinerator, the temperature reaches several thousand degrees, which decomposes virtually all materials. Even needles and other metal objects turn to ash, creating environmentally neutral metal oxides. On the other hand, polymers are a good fuel and break down mainly to carbon dioxide.”

He adds that incinerators can power themselves, because the heat they generate can be used for internal processes of incineration plants and reduce the high costs of combustion.

Dr. Szatkowski draws attention to the problem of environmental pollution by waste related to the pandemic, mainly disposable masks and gloves used in everyday, non-medical situations. This waste goes to municipal waste dumps.

He said: “The masks are supposed to protect other people from us if we carry the virus. The spray from the nose or mouth is stopped by the mask - and it works. A regular cotton mask that can be washed and used indefinitely is good for that purpose. Disposable masks are not advisable.”

Although in theory masks could be recycled, they should not be thrown into containers for plastic waste. The scientist points out that people who select and separate materials in sorting plants do not feel comfortable turning over used masks on the line. In his opinion, a good analogy are used diapers that also ends up in landfills as non-recyclable products.

“Such waste will be a problem for society for several thousand years. We pay for their disposal, not the manufacturers who market them. Masks that go to the collection containers for mixed rubbish are buried in the landfill and await 'better times', technologies that will allow to revitalize old landfills. We bury the problem for later,” he says.

The situation is worst when masks end up outside the system, for example in rivers. Animals that mistake the fibres of thin films for food poison themselves to death. Film is released from their organisms again, creating a chain of death that kills other creatures. This film is virtually non-degradable.

Dr. Szatkowski proposes to imagine how much such waste goes to reservoirs in Asia, since even in Europe, where people have the possibility of depositing waste, plastics are found in the natural environment: in seas and rivers.

According to the researcher, using disposable products in everyday life and using plastics that are practically immortal is not reasonable.

Scientists know materials that could replace polymer materials. But very low crude oil prices are working against their implementation.

Dr. Szatkowski explains that all polymer materials and plastics are made of crude oil and natural gas. Cheap raw material means cheap pellets. On the other hand, recycled pellets, which have much worse properties than the fresh pellets, are more expensive because the material (for example from yellow containers) has to be collected, sorted, cleaned and melted. Therefore, the materials collection, processing and recycling industry is currently in a severe crisis.

Researchers from AGH UST and their industrial partners are implementing the technology of producing disposable spoons that fully degrade. The spoons are made of corn-based polylactide. They are coloured brown with coffee dye and look like disposable spoons. Together with companies that produce sweets, scientists are working on packaging materials - films that decompose. Other projects concern biodegradable fertilizers. Polylactide has better mechanical properties than polyethylene and costs only 50 cents per kilogram more. It can be used to make bottles and yoghurt cups.

Despite the efforts of scientists and the few producers who understand the need for changes, conventional polymers will not disappear from the market as they are too useful to be eliminated. But according to statistics, half of the plastics that end up in landfills come from packaging materials that are required to last only a few months.

In theory, medical helmets could also be made of transparent polylactide. But they are mainly used in hospitals that have strict guidelines on the materials they can use. The visor is made of a similar material as beverage bottles. In non-hospital conditions, it makes little sense to wear such helmets, although they, as reusable products, do not constitute such a threat in the environment as gloves or masks.

Gloves are even more difficult to dispose of because the rubber they are made of is not thermoplastic, it cannot be melted down, so such gloves cannot be recycled.

According to forecasts, the global packaging market will grow by over 5.5 percent this year. This means that during a pandemic, despite a decline in consumption due to the shutdown, the production of plastic items increases.

Szatkowski said: “People have changed their perception of disposable materials a bit, they now see them as health-promoting materials and use them a lot. They associate disposable cutlery or packaging materials with better safety.

“Earlier, developed countries were introducing directives to phase out single-use packaging materials, as this waste poses a very high environmental risk. Globally, as much as 18 percent of such materials end up in the oceans where they wreak havoc.

“As a result of the pandemic, these restrictions were postponed to an unspecified date or suspended, which coincides with the interests of producers.”