Polish prof. among finalists of EU Prize for Women Innovators 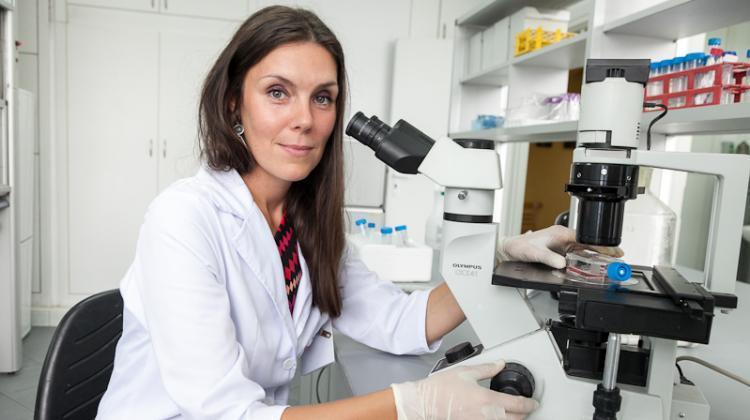 Professor Magdalena Król from WULS-SGGW, a specialist in experimental oncology, is among 21 finalists of the EU Prize for Women Innovators. The researcher is working on cell-based technology that helps in the diagnosis and treatment of cancer.

The EU Prize for Women Innovators is awarded in recognition of outstanding achievements of women entrepreneurs running innovative companies. It is financed by the EU programme Horizon 2020.

As part of the competition, 13 candidates, including Professor Magdalena Król, compete for three main prizes worth EUR 100,000 each. Eight candidates compete for the title of Rising Innovator. In this category for innovators under 35, the prize is EUR 50,000.

Professor Magdalena Król is a co-founder of Cellis, a company developing a cell-based technology that helps in the diagnosis and treatment of cancer.

The researcher has developed a method that allows therapy to reach solid, avascular cancerous tumours. Professor Król's method is based on the ability of macrophages (cells of the human immune system) to migrate deep into inaccessible areas of the tumour. Such places are solid tumours without blood vessels, through which anti-cancer drugs could be delivered.

In natural conditions, macrophages have so-called protein cages that researchers use to transport drugs. The drug can be enclosed in them and then the cage 'packed' in a macrophage, which transports the drug to the tumour area and eliminates the cancer. Professor Król and collaborating scientists found that macrophages pass protein cages directly to cancer cells. No one has observed or described it before. The discovered phenomenon was called TRAIN.

Professor Król is a veterinary surgeon, professor in the field of veterinary sciences and head of the Independent Laboratory of Cancer Biology at the Institute of Biology, WULS-SGGW. In 2017 she was a visiting professor at the Sapienza University in Rome. She specialises in experimental oncology and is particularly interested in cell therapies and the impact of the immune system on the formation of cancer metastases.

She received the Ministry of Science and Higher Education scholarship for outstanding young scientists, the Pfizer Animal Health scholarship, the L'Oreal habilitation scholarship, the UNESCO award for women and the Polish Society of Veterinary Science awards. In 2014, she was the laureate of the 'Poles with Verve' poll, and in 2017 the 'Man of the Year 2016' in the science category in the Gazeta Wyborcza poll.