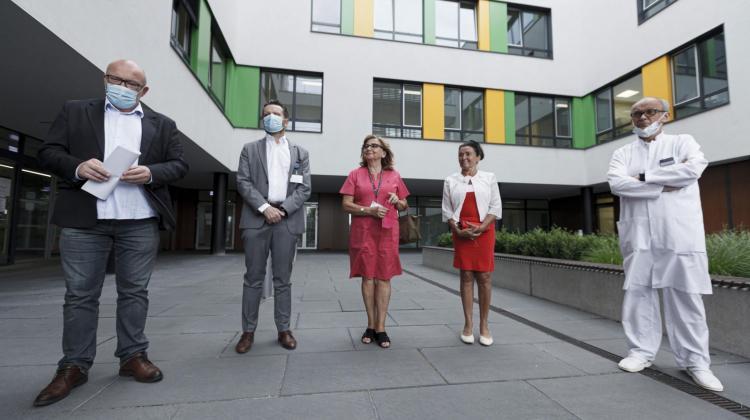 An 11-year-old boy has been cured of acute lymphoblastic leukaemia thanks to CAR-T gene therapy.

The child who has been named as Olek had been suffering for seven years, was treated at the Bone Marrow Transplantation, Oncology and Haematology Clinic of the University Clinical Hospital in Wrocław, the first place in Poland to complete a certification process confirming its readiness to use the therapy on paediatric patients.

Professor Krzysztof Kałwak from the Wrocław clinic said: “Despite earlier treatment, leukaemia was still recurring and in 2019 most doctors no longer had hope of saving the boy.

“But we were determined and after obtaining the certification we performed leukaepheresis on the child, obtaining the appropriate number of T lymphocytes, which were then genetically modified in a laboratory in the US.”

He added that the modified T-cells, equipped with tools for targeted killing of leukaemia cells, were sent to Wrocław from the US and transplanted to the patient on March 3, 2020.

He said: “After the transplant, we did not observe any significant immunological or neurological complications, and we were able to send the boy home before the COVID-19 epidemic was announced.

“In the first two months after administration, we observed a decrease in residual disease, but leukaemia cells still were present. Now we finally have the long-awaited +zero+ with a 10-5 sensitivity.

“We do not have a 100% guarantee that the effect will be permanent, but for now it has an undetectable residual disease and for the first time in 7 years the child, his parents and we, doctors can breathe a sigh of relief: the impossible has become possible.”

The mechanism of CAR-T therapy consists in isolating leukocytes, including T lymphocytes, in a special blood filtration process (leukaepheresis). They are then frozen and sent to a laboratory for modification. With the help of a viral vector, T cells are genetically programmed to recognize tumour cells. Then the newly created CAR-T cells multiply and are returned to the patient's blood. Having been primed, CAR-T cells are able to recognize cancer cells, attach to them and actively destroy them.

Deputy head of the clinic, Professor Bernarda Kazanowska, said: “Most patients with acute lymphoblastic leukaemia respond well to conventional therapy, but in some of them with signs of poor prognosis, relapse quickly. For around 15-20 children a year, at this time we do not have any therapeutic solutions that would give a chance for recovery. The CAR-T method is undoubtedly a hope for them.”

Professor Piotr Ponikowski, acting rector of the Wroclaw Medical University,  added: “We want scientists and clinicians to take big steps in medicine together. I hope that as part of the Medical Research Agency grant, our university will soon be able to start a programme that will enable the production of our own CAR-T cells. But the estimated time to produce +Polish CAR-T+ is about 3 years. This is a minimum, because the technology must be produced and then tested in clinical trials to verify its effectiveness and safety.”

The Medical Research Agency said that over the next six years it will allocate PLN 100 million for the implementation of CART-T therapy programmes in Poland. Olek’s therapy, costing around half a million zloty, was financed through a joint campaign of the Foundation Rescue Children with Cancer and the Siepomaga Foundation.

Acute lymphoblastic leukaemia is the most common cancer in children and at the same time the most common leukaemia affecting paediatric patients. It is a cancer of lymphocytes (white blood cells) involved in the functioning of the body's immune system. The disease progresses quickly and requires immediate treatment.

It is estimated that around 85 percent of children affected by this disease achieve remission after induction treatment, but the disease recurs in about 15 percent of patients after bone marrow transplantation or the second or subsequent course of treatment.

The prognosis for patients with relapse is poor despite the use of systemic treatment, such as chemotherapy, radiation therapy, targeted therapy or stem cell transplantation; the survival rate in this group of patients is low. (PAP)