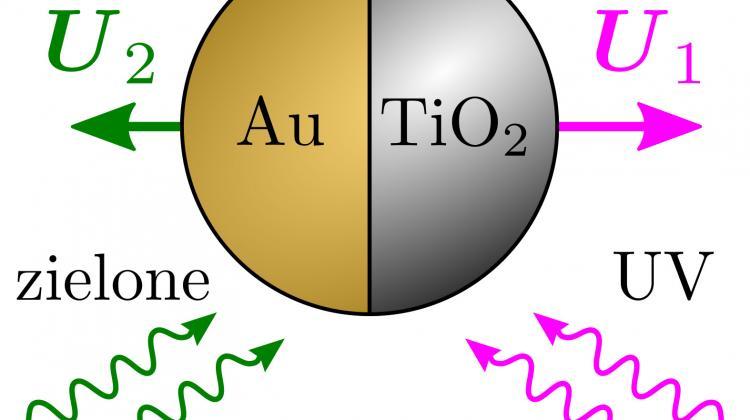 Sketch of the new catalytic mechanism proposed in the present Nature Communications paper. The particle is made of titanium dioxide with a gold-coated hemisphere. Its motion is induced by external illumination. Under green light, the particle moves towards the gold cap, but when exposed to UV light, it reverses its direction of motion and moves in the opposite direction. (Source: UW Physics, M. Lisicki)

Researchers from the Faculty of Physics at the University of Warsaw, ETH in Zurich and the University of Cambridge have synthesized and analysed active microparticles self-propelling in a fluid and reversing their propulsion direction depending on the wavelength of illuminating light. A research article summarising their work has recently been published in Nature Communications.

Active matter encompasses systems elements of which can self-propel, drawing the energy from their environment and converting it into kinetic energy. This direction of research is currently a lively discipline in physics. It spans across many time and length scales, concerning e.g. the behaviour of birds in flocks (such as murmurations of starlings in the evening sky), schools of fish (as a form of protection against predators), and also bacteria in biofilms and other aquatic microswimmers. It focuses both on the behaviour of individual elements and understanding their mechanisms of energy conversion, interaction and coupling with the environment so important for the survival, and on the collective effects and emergence of new phenomena in large population. Both can be successfully described on different levels of precision, starting from simplistic minimal coarse-grained models, and up to refined numerical simulations.

Bacteria, algae, spermatozoa, ciliates and other unicellular organisms are an important group of active swimmers. Exploring the physical basis of their dynamics is often complicated by their immense diversity, biological complexity, and high sensitivity to external conditions. Aquatic microworld is, however, governed by the universal laws of fluid dynamics which put limitations on all organisms. Due to their small sizes – micrometers, typically – and swimming speeds not exceeding tens of body lengths per second, the flow around them is dominated by viscous effects. This means that the swimming strategies of sharks or olympic swimmers fail completely in microscale competition. Macroscale swimming is based on inertia and pushing the water backwards rapidly. In microscale, inertial effects are negligible and water behaves like a very viscous fluid, such as honey or golden syrup. Imagine swimming in a pool filled with honey – a crawl stroke would be very exhausting and highly ineffective. Hence, swimming microorganisms have devised other strategies for propulsion, based on exploiting viscosity. Bacteria often have helical flagella, which they use to ’screw into’ the fluid like a corkscrew. It turns out that in the viscous microworld this strategy allows for effective locomotion. Larger organisms, such as ciliates (and Paramecium among them, an often used example in school biology), have their bodies covered with thousands of cilia, resembling tiny hair. They move them in a coordinated way, similarly to a Mexican wave at a stadium. This allows the fluid to be dragged along the cell surface, and in result the cell propels in the direction opposite to the ciliary wave propagation. 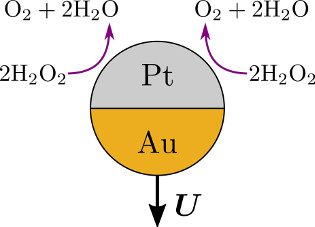 Sketch of a Janus particle with two ‘faces’. A classical realisation are hemispheres of gold and platinum in a solution of hydrogen peroxide. The platinum side catalyses the decomposition of the peroxide to water and oxygen. The concentration imbalance of the reagents causes a flow along the surface, which induces self-propulsion in the direction of the gold cap. (Source: UW Physics, M. Lisicki)

Understanding these mechanisms has inspired the development of a novel field of synthetic microswimmers. The vision of designing microrobots in laboratories has excited researchers for many years due to the potential wide applications in diagnostics, medicine, and technology, such as targeted drug delivery inside the patient’s body. From this perspective, it is vitally important not only to design such swimmers, but also to control their motion.

The mechanism described above and used by ciliated swimmers (also in multicellular organisms, e.g. cilia in human lungs and reproductive tract are essential for the transport of mucus), has inspired a number of swimmers using the phenomenon of diffusiophoresis. In order to explain it, let us take up the example of a Janus particle, inspired by the Roman god with two faces. A typical realisation is a spherical microparticle with one hemisphere covered with gold, and the other covered with platinum. When placed in a solution of hydrogen peroxide (H2Osub>2), the platinum side catalyses the decomposition of the peroxide to water and oxygen. In result, the concentration of products of this reaction on the platinum hemisphere increases and the concentration imbalance creates flow along the surface. Similarly to the swimming ciliates, motion of the fluid along the surface causes motion of the cell in the opposite direction. We thus have a system which locally converts chemical energy of its surroundings into its own kinetic energy. The mechanism described above is universal, the key ingredient being the nonuniform concentration of the reagents on the surface. Moreover, the chemical gradients can be replaced by an imbalance of temperature or electrostatic potential. All of these mechanisms have been experimentally confirmed in microscopic systems. It is worth noting that the typical sizes and swimming speeds of these synthetic swimmers are comparable to their biological source of inspirations. Thus by exploring artificial active matter we gain an additional insight into the swimming microworld.

Many propulsion mechanisms have been proposed and are available for synthetic active matter. The challenge remains to control the motion of a swimmer, or program it such that it could reach a predefined place and e.g. deliver a drug to a chosen part of the body. Alternatively, it could be steered by an external stimulus, such as electromagnetic radiation, electric or magnetic fields, sound waves, or inhomogeneous temperature.

The novel double catalytic self-propulsion mechanism for Janus particles from the Nature Communications paper. The particles are made of anatase (a mineral form of titanium dioxide) and have a (bright) hemisphere coated with gold, as seen in the inset electron microscope image in the upper left corner. The bright field microscopic images are frames from a movie, in which initially (a-d) the particle exhibits free Brownian motion. The lightning bolt marks the start of illumination. (e-h) The particle propels when UV light activates the first catalytic mechanism. In the schematic drawing in (e, i) the gold colour represents the coated hemisphere. (i-l) The change of lighting to green visible light induces motion in the opposite direction. Scale bar in (l) is 5 micrometres. (Source: UW Physics, M. Lisicki)

A step in this direction is presented in the new paper by researchers from University of Warsaw, ETH in Zurich, and University of Cambridge, published recently in Nature Communications. It demonstrates novel, modified Janus particles, moving in a fluid under the influence of external lighting, with the direction of motion depending on the wavelength of the incident light. The particles with a diameter of 3.5 microns were made from anatase – a polymorph of titanium dioxide - with one hemisphere coated with gold. When illuminated with green visible light, the particles move towards the gold cap, while when exposed to UV light, they reverse their direction of motion. The particles were synthesised by Dr. Hanumantha Rao Vutukuri and Prof. Jan Vermant at ETH Zurich, where all the experimental works were performed. 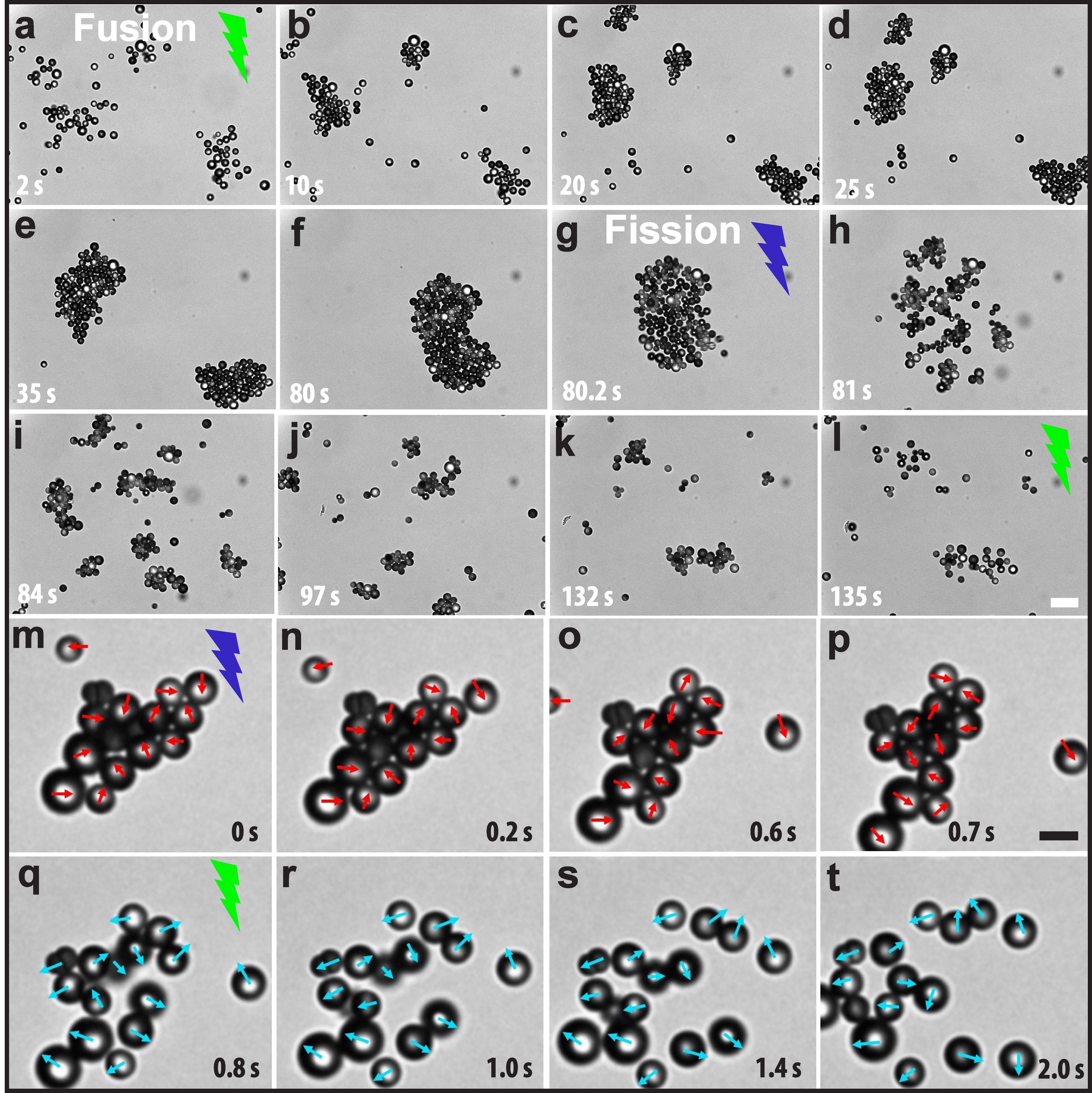 Fusion and fission dynamics of switchable photoresponsive colloids. Collective effects in the dynamics of new catalytic particles described in the Nature Communications paper. Arrows depict the direction of motion of the particles. The colour of the lightning bold describes the type of illumination (blue for UV light, green for green visible light). (a-f) Fusion: time-evolution and dynamical growth of clusters leading to the formation of a single cluster. (g-l) Fission: after the change in illumination, the direction of flow created by individual particles reverses, and the large cluster explodes, creating small islands of particles. (m-p) Red arrows point towards the titanium dioxide hemisphere (bright part of the particle) and indicate the direction of motion. (q-t) Cyan arrows show the direction of motion under the change to green light illumination. Scale bar is 5 micrometres. (Source: Nature Communications 11, 2628 (2020)).

‘By changing the wavelength of light we activate different catalytic mechanisms on the particle surfaces, by which we can quickly steer the motion in a controlled way’ says Dr. Maciej Lisicki from the Faculty of Physics, University of Warsaw. ‘Moreover, we see very interesting collective dynamics: the particles can attract or repel each other, depending on their relative orientation and the colour of illuminating light. Tuning this, we observe rapid processes of fusion and fission, which we can steer’.

The description of motion in such a system requires considering both the chemical interactions of particles though their inhomogeneous concentration fields of the reagents created on their surfaces, as well as the hydrodynamic flow caused by their presence. The theoretical model allowing to describe the dynamics of these novel active particles was constructed by Dr. Maciej Lisicki (Warsaw) and Prof. Eric Lauga (Cambridge).

‘At micrometric sizes, we think about the fluid around the particles as being very viscous’ says Maciej Lisicki. ‘Their hydrodynamic interactions are thus far-ranged. The motion of each particle is felt by all others.’

The researchers, who have been working on the applications of diffusiophoresis to the synthesis of artificial swimmers and microscale pumping for a long time now, believe that this novel, reversible and controlled mechanism of self-propulsion for Janus particles is a step on the way towards more complex microrobots which will eventually be able to transport cargo on cellular scale. It could also be used to control collective motion in microscale by local light-induced stirring in suspensions of active particles and mixtures of active and passive colloids suspended in a fluid.