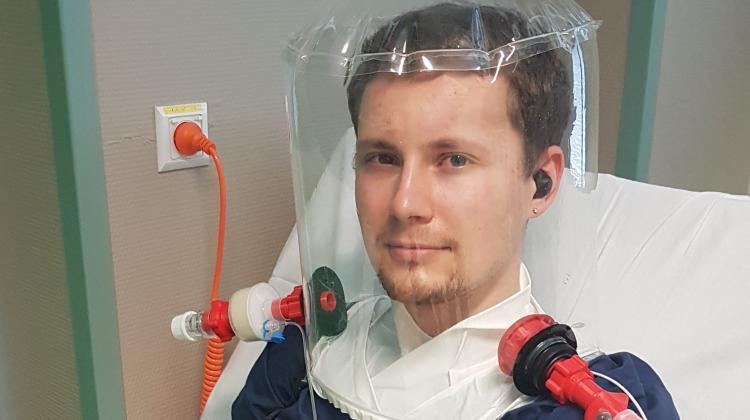 Dr. Wróblewski said: “This form of oxygen therapy and respiratory support seems to be a good alternative to other non-invasive ventilation methods, especially considering the need to limit direct contact with potentially infectious air exhaled by the patient.

“In Poland, this method of non-invasive ventilation is not widely promoted mainly due to the high costs of disposable helmets, and currently also due to the lack of purchase options.”

Major Dr. Paweł Płatek from the Institute of Armament Technology at the Faculty of Mechatronics and Aviation, who is overseeing the work carried out at the Military University of Technology, added: “Connecting the oxygen line to the intake system makes it possible to use oxygen in a concentration of over 90 percent.

“In addition, isolating the patient and filtering the exhaled air reduces the spread of the virus and the risk of infecting other people.”

So far, the teams have come up with several prototypes for the parts of the system supplying and removing air from the helmet.

By using 3-D technology, the teams have created several variants of the helmets and will be able to make larger quantities to carry out tests on a larger number of patients.

After testing and certification they will be supplied to Polish hospitals, where they will be used to treat patients with respiratory failure.