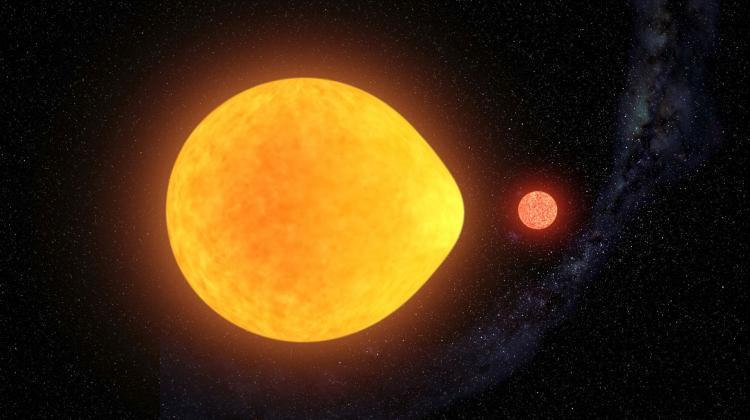 A new type of pulsating star in the shape of a ‘tear drop’ has been discovered by an international team off scientists led by researchers from the Nicolaus Copernicus Astronomical Center PAS in Warsaw.

And unlike standard variable stars which change brightness and give the impression of ‘rhythmically pulsating’, the new star pulsates on just one side, giving it it’s distinct shape.

According to the research published in the latest issue of Nature Astronomy the star is being distorted by the gravitational pull of its nearest companion star.

Scientists have long-thought that the axis of a star’s pulsation can be moved by tidal forces.

But until now, there was no observational evidence that such objects actually existed.

By using the TESS satellite, which has been hunting for new planets since its launch in 2018, scientists were able to observe changes in brightness resulting from both the gravitational deformation of the star and pulsations.

It turned out that the pulsation amplitude very strongly depended on the angle, at which the star was observed (and thus its orientation in the binary system).

Co-author of the report, PhD student Paulina Sowicka, said that when binary stars revolve around each other, we see different parts of the pulsating star: sometimes it is its surface directed towards the companion, sometimes the outer surface.

The lead author of the publication is Professor Gerald Handler from the Nicolaus Copernicus Astronomical Center PAS in Warsaw.