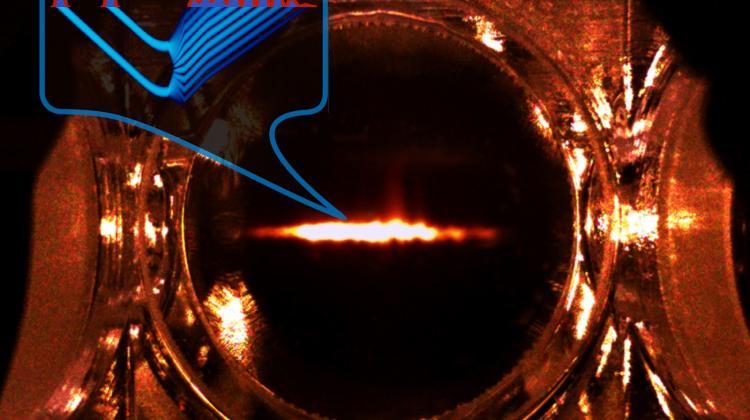 Photograph of a cloud of Rubidium-87 atoms, the most important part of quantum memory used to demonstrate the time telescope with record resolution. The insert shows an example of experiment result with two short pulses at the telescope's input (left), the Fourier transform of which is the comb visible at the output (right). (Source: Faculty of Physics, University of Warsaw, photo by M. Mazelanik)

An optical time telescope that collects signals for a record long period of several dozen microseconds, has been built by doctoral students at the University of Warsaw’s Faculty of Physics.

The time telescope is a special optical device that enables simultaneous reception and analysis of many closely located optical frequency ranges (channels). The device makes it possible to separate optical signals with frequencies as close to each other as FM radio stations (0.1 MHz). Time telescopes developed by other groups around the world have so far achieved a million times smaller resolution and are adapted to broadband signals emitted by optical devices based mainly on solids.

A spokesman from the faculty said: “The telescope developed at the University of Warsaw has a completely different operation regime, which means that it can record signals emitted by systems based on, for example, atomic gases, single ions or rapidly developing opto-mechanical systems, which was impossible until now.

“The device also exceeds the capabilities of optical spectrometers thousands of times, as those usually do not allow for the reception of more than one channel at a time. It is worth noting that obtaining such a high resolution using conventional methods would require the use of approx 10^12 km of optical fibre, almost as much as the circuit of Saturn`s orbit.

“The work began with an analysis of the principles of operation common foe a multi-channel radio and an optical telescope, because both devices implement the Fourier transform, although in a completely different frequency range. Many commonly available devices make it possible to observe the music spectrum during song playback, where the bars showing the strength of each range of acoustic waves are calculated by the computer using the aforementioned transform. It works both ways: we can split the sound into component tones or assemble a chord from individual tones, imitating piano playing. Using the Fourier transform, musicians taught the electric piano to speak years ago (https: //youtu.be/-6e2c0v4sBM)."

The method of obtaining Fourier transform of optical signals demonstrated in the device is also reversible. As a result, individual received channels are completely independent, which is important in some communication protocols using multiple channels at the same time.

According to the Faculty of Physics, the unique scheme can be used as a receiver in quantum information transmission protocols, ultimately in quantum cryptography, where using multiple channels increases the transmission speed. Another potential application is receiving data from very distant satellites that broadcast optical signals.

A Faculty press release said: “Thanks to the extraordinary properties of the described receiver, it could also be used for the practical implementation of the extremely sophisticated optical coding schemes recently proposed by theorists, which could also significantly increase the speed of receiving encoded information.”

The project, under the supervision of Dr. Wojciech Wasilewski from the Centre for Quantum Optical Technologies (QOT), was carried out by the Quantum Memory Laboratory group with the participation of two doctoral students, a graduate student and one recently promoted doctor with the support of the head of the laboratory, on a unique quantum memory built entirely at the University of Warsaw. In addition, two electronics students assisted the team.

The press release added: “The consistent and strenuous work of the entire team included the expansion of the optical system, precise verification of the interaction of components in a series of test measurements, development of the concept of a new experiment through theoretical simulations, matching parameters to the actual experiment, searching for the regime in which the new scheme works best, and finally final measurements and plotting the obtained results in a synthetic form, corresponding to theoretical models.

“The developed scheme is not similar to any previously known one, so all team members had to be very creative, which allowed them to acquire a unique, extensive experience in quantum optics, electronics, programming and a number of other areas.”