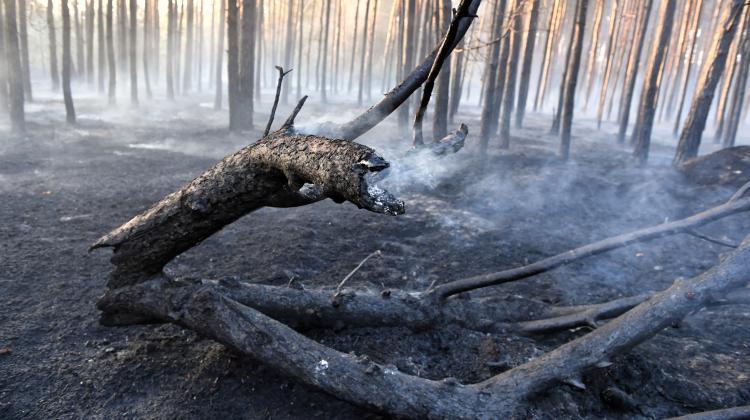 The consequences of forest fires can be devastating, but new research shows that some species can benefit from them.

At the end of April 2009, a fire which broke out in the northern part of the Białowieża National Park, destroyed around 7 ha of forest, killing nearly all the spruce trees and one-tenth of the pines.

Consequently, a lot of dead wood accumulated which scientists decided to take advantage of to research beetles (Coleoptera).

Over the next 10 years they compared observations made in places affected by the fire with similar observations in the control area (a nearby area of ​​the Forest, where there was no fire).

They found that the fire had increased the biodiversity of beetle species.

LANDSCAPE AFTER THE FIRE

Lead author of the study, Professor Jerzy M. Gutowski from the Natural Forests Department of the Forest Research Institute in Białowieża, said:

“Immediately after the fire, the sets of beetles on the burnt and non-burnt surface clearly differed: species were different, their numbers were different. However, over time, they would become more and more similar.”

He added that disruptions in forests, such as fires, bark beetle outbreaks and windbreaks, transform their structure, but do not constitute a natural damage. They can even increase biodiversity.

He said: “In the studied area, we identified a total of almost 28,000 individual of beetles belonging to 630 species. In the collected material, three species new for the Polish fauna and as many as 11 species new for the Białowieża Forest were found. In total, there were 61 +fire-loving+ (pyrophilic) beetle species.”

Co-author, Dr. Michał Żmihorski from the Mammal Research Institute PAS in Białowieża said that differences in beetle groups between burnt and control surfaces were found at different levels of biodiversity organization.

He explained: “In the burned area, species richness at the alpha level and the density of beetles were higher than in the same forest untouched by fire. But the difference was also found in gamma diversity.”

Dr. Żmihorski added: “Let`s say that on average it is 5 species. The gamma diversity is the sum of species for all individual samples. Gamma will not be a simple product of the number of individual samples and the average number of species in one sample, because the same species will repeat in different samples. It could even happen that we have the same 5 species in all samples, so alpha equals gamma. However, this is not usually the case.

When reporting on forest fires, the media often talk about losses and damage. But for scientists the fire site is a dream testing ground, allowing them to observe nature`s responses to disruption.

Prof. Gutowski said: “For many forest species, fire is paradoxically better than no fire. Suddenly, as a result of fire, there are a lot of weakened or dead trees. This attracts invertebrates, which, in turn, are an important source of food for birds, such as woodpeckers that like damaged trees and eagerly poke hollows in them. They feed wherever beetle larvae develop. Forest animals from our climate, boreal climate and from Central Europe, are adapted to such disruptions.”

The dependence, according to which natural wealth is the greater, the less people interfere in the process of forest renewal after fires, is also important.

“Our previous research shows that the forests still lives right after the fire. There are also many birds, more than in a managed forest,” said Dr. Żmihorski.

This refers to research conducted by scientists from Poland and Sweden under the supervision of Dr. Grzegorz Mikusiński from the Swedish University of Agricultural Sciences (SLU) in a boreal zone managed forest after a huge fire in 2014. Researchers compared cleared fragments of the fire site with uncleared places that had been left untouched. They were interested in the species of birds present there and their abundance.

It turned out that the greater wealth of bird fauna (the number of birds, and - to a small extent - the diversity of species) was found in the parts of the forest that had been burnt and left without interference. Importantly, the sets of birds in both areas were very different. In the non-cleared burnt area, forest species were observed: great tit, crested tit, willow tit; bullfinch, thrush and three-toed woodpecker. In the cleared area, species typical for open landscape appeared: whinchat, white wagtail, red-backed shrike and pipit. The authors of the study suggested that after the fire has passed, specialized species adapted to the forest environment should be given a chance and cleaning activities should be limited.

SAW AND AXE VERSUS BEAUTIFUL DISASTER

In a new publication of Forest Ecology and Management, the researchers note that there is not much research into the effects of forest fires. The existing studies usually cover a relatively short period (1-3 years) and mainly concern managed forests with poor species diversity, composed of trees of similar age. In places where the fire destroyed some trees, conditions change for some time. The partly burnt trees remaining after the fire and dead trees attract species associated with dead wood and semi-open areas. They have their five minutes then.

Paradoxically, in an managed forest, fire is an opportunity for ecological enrichment: greater diversity of habitats, the creation of new ecological niches or enrichment of fauna. “Contrary to our intuitive interpretation, a forest fire is not a great disaster. Locally, it may even promote biodiversity`, explains Dr. Żmihorski, who took part in both studies (in the Białowieża Forest and in Sweden).

He added that after a fire dead trees remain an important, abiotic element of the environment: they still give some shade and help maintain higher soil moisture. They also create a three-dimensional structure: the third dimension, important for many species of typically forest animals, associated with tree crowns.

Research in the Białowieża Forest enable the scientists to assess some effects of fire in a highly natural forest. The example of beetles confirms that disruptions caused by fire can increase the diversity of species also in natural forests, rich in species, where biodiversity was relatively high before the fire.

The authors suggest leaving forests on fire without intervention: avoid felling trees, clearing the area or artificially planting. This approach favours the development of a variety of species associated with dead wood and promotes natural regeneration of the forest.

They wrote: “Our research shows that leaving the area affected by the fire without interference can increase the species diversity of beetles. Meanwhile, the practice of felling the dying and dead trees and clearing wood dominates in such situations, and it can limit this biodiversity.”

Dr. Żmihorski also draws attention to the need for the different treatment of natural and managed forests after a fire. He emphasizes that instead of speeding up forest regeneration, removing burnt trees and planting new trees actually delays it. It causes a decrease in the number of typical forest species and their replacement by species typical for open areas.

"If we have a disaster in a managed forest, foresters remove dead trees and use them, and introduce new trees in their place. This is in line with the art of forest management. But we also have national parks, reserves and other areas with different conservation regimes. It is a big mistake to also use managed forest models in them`, he says.

Forest fires are one of the most important disruptions in the forests of Northern Europe. Drought and carelessness of man favours them, although they also happen after a lightning strike. The impact of a fire on the forest ecosystem depends on the scale, type of forest and fire intensity.

Experts have no doubt that as a result of global climate change, fires will be more frequent and more intense. The massive fires in the US, the Amazon and Australia, as well as in Europe (in Scandinavia, Spain, Greece, etc.), which occurred only last year (in 2019), appear to confirm this.