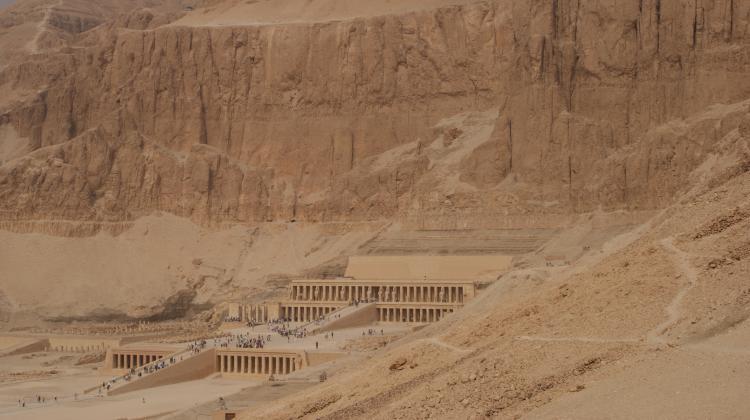 Archaeologists at an ancient burial site in Egypt have found a stone chest dating back 3,500 years which they believe could indicate the presence of a royal tomb nearby.

The chest containing a sacrificial goose and other items wrapped in linen cloths was discovered near at Deir el-Bahari near the Temple of Hatshepsut and the name of Pharaoh Tuthmose II written on the casing of a chapel-shaped faience box.

Head of excavations Professor Andrzej Niwiński from the Institute of Archaeology of the University of Warsaw said: “The box itself was about 40 cm long, slightly less in height. It was well camouflaged, it looked like an average stone block. It was only after closer inspection that it turned out to be a box.”

Not only does the pharaoh`s name written in hieroglyphs suggest that the deposit was made on his behalf, the archaeologists believe that the items placed inside the box, including a goose egg and another believed to belong to an Ibis, allude to the titles and names of this pharaoh.

According to Professor Niwiński, Tuthmose II was the husband of the famous Queen Hatshepsut. He sat on the throne as a 13-year-old and died three years later. According to the Egyptologist, it was a dynastic `forced` marriage.

In the area near the place where the chest was found, there is the famous terraced temple erected for the woman Pharaoh, and - even closer - the remains of the temple of Tuthmose III - son of Tuthmose II.

The discovery was made in March 2019 but has only now been made public. The archaeologists say that the discovery of an intact tomb of King Tuthmose II is “very close”.