Blog
This text can be copied
Anna Ślązak 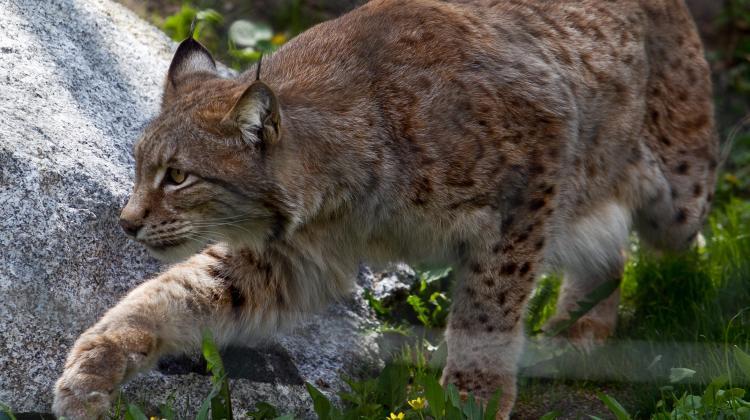 Can events from hundreds of thousands of years ago be read from the DNA of modern animals? Could the lynx have ever been threatened with extinction? Can human activity endanger it?

These are among the questions as International team of researchers led by Maria Lucena-Perez and Dr. Jose Antonio Godoy from the Doñana Biological Station in Spain and Polish scientists from the Mammal Research Institute of the Polish Academy of Sciences in Białowieża and the University of Bialystok are looking to answer.

Publishing their results in the journal Molecular Ecology, the researchers took tissue samples from several dozen lynxes from 12 different populations within the Eurasian range, living in extremely different climatic and environmental conditions: from the temperate forests of northeastern Poland, through the Gobi desert, the taiga of northern Siberia, to the far-eastern coasts of Russia.

The samples were subjected to genome sequencing and analysis of non-coding segments. The researchers also examined the entire mitochondrial genomes to search for such changes in the predators that could be affected by living conditions in the distant past - and today.

Bioinformatic methods allowed the researchers not only to measure and compare the level of genomic variation in different lynx populations, but also to reconstruct the history of population size changes since the species emerged.

Studies have shown that despite the widespread occurrence across the continent, the lynx is characterized by an unexpectedly low variability, comparable to endangered populations of species such as the extremely isolated and genetically drifted population of brown bear in the Apennines, or Iberian lynx in Spain, counting only a few dozen individuals each.

Dr. Krzysztof Schmidt from the Mammal Research Institute PAS, leader of the project research financed by the National Science Centre said: “Lower variability may mean a threat of inbreeding, that is, the possibility of interbreeding of closely related individuals.

“And this, as we know, does not bode well: lower immunity, more frequent occurrence of various health problems, lower fitness. This may result in increased mortality, and thus threaten local populations.”

This paradox of low variability of the species present across the continent is most likely associated with a strong reduction in the population of the predator, which, according to research results, occurred in the history of the species.

Until 100,000 years ago, all lynx populations across the continent were genetically homogeneous, but their numbers were steadily decreasing as the climate cooled.

Only after this period, populations from the Asian part of the continent began to genetically differentiate from those in Europe. Their complete isolation happened approx. 10,000 years ago.

The researchers noted that during the same period, humans were spreading ink the area and hunting for ungulates, which were also lynx food.

Professor Mirosław Ratkiewicz from the University of Bialystok said: “We think that human activity could have led to a further reduction in the number of species at the end of the glaciation period, and especially after it, when one would expect that global warming should rather promote the expansion of animals.”

This is supported, among other things, by the large genetic homogeneity of the Asian part of the lynx population (as opposed to Europe), despite the fact that these predators live in habitats as diverse as the Gobi Desert and the Siberian taiga. Soon after the retreat of the glacier, human pressure in this area was much lower than in Europe, where the expansion of our species accelerated significantly with the development of agriculture.

“Lynx inhabiting the European part of the continent are characterized by clearly lower genetic variability and larger differences between individual populations than those from the Asian part of the range,” added Dr. Schmidt.

Analysis of the variability of the non-coding part of the genome also showed that lynx populations inhabiting north-eastern Poland, the Carpathians and Norway experienced another, very recent, massive decline in numbers, known as the `bottle neck`. These results prove that the current distribution, numbers and genetic variability of these predators are the result of mass extermination of the species that took place in the 19th and 20th centuries.

The conclusions drawn from the research clearly indicate that human activity has an extremely strong impact on the survival rate of populations of wild animal species, especially rare ones, such as large predators. They also confirm that this influence began thousands of years ago.

At the same time, they prove that the best strategy for protecting lynx in Europe should be to ensure contact between populations. This would reduce their genetic isolation and reverse dramatic changes that are now visible in the genome of these animals as a result of environmental fragmentation and the extermination of the species, the authors of the analysis concluded.