Polish ‘Visual Reconnaissance’ Robot at DARPA Robotics Challenge in the US 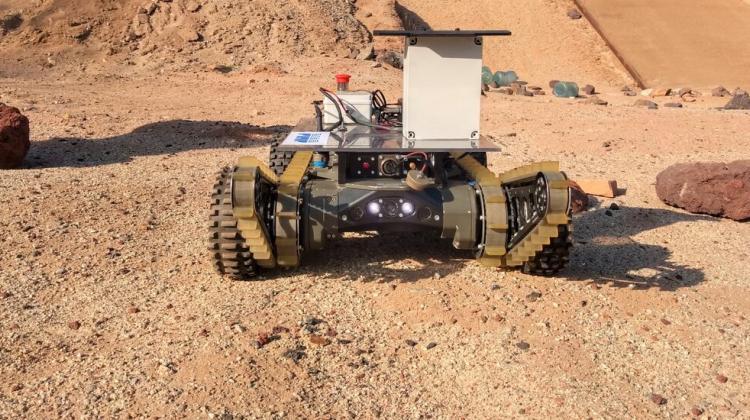 A Polish robot will, for the first time, take part in the DARPA Robotics Challenge in the US.

Constructed by engineers from the Łukasiewicz – PIAP Institute, and weighing just 27 kilograms, the robot was designed for visual reconnaissance and is equipped with special cameras and a tracked wheeled drive system ensuring increased mobility in difficult terrain.

Dr Piotr Szynkarczyk, director of the Łukasiewicz Research Network - PIAP Industrial Institute for Automation and Measurements, said: `Participating in the DARPA Challenge is an amazing experience.

‘We can observe how robots perform their tasks related to underground search. This application of robotics can be used in the area of ​​security, and in the long run, perhaps also in the exploration of the Solar System.’

The DARPA Robotics Challenge has been held since 2012. The aim of the competition is to select robots that could replace man in dangerous tasks and in difficult or inaccessible terrain conditions.

The competition is organised by the US Defense Advanced Research Projects Agency (DARPA), an American government agency that develops military technology.

Polish engineers began working with the California Institute of Technology (Caltech) in 2019 as part of the `Space Research Development` project financed by the National Academic Exchange Agency (NAWA) and coordinated by the Łukasiewicz - Institute of Aviation.

The goal of cooperation with Caltech was to compete together in the DARPA Subterranean Challenge in 2020. This year, the competition focuses on the civilian aspects of the use of robots in underground rescue operations, including metro lines and mines.

Preparation of the rover for the DARPA competition took place in California during the fellowship of Polish engineer Sławomir Kurdziel from Łukasiewicz - PIAP.

Engineers from the institute`s Warsaw headquarters also participated remotely. The robot was subjected to the processes of adaptation and DARPA competition suitability testing.

In cooperation with scientists from the California Institute of Technology and NASA`s Jet Propulsion Laboratory (JPL), the robot was integrated with new software and sensors.

This enabled engineers to test new methods of ensuring the robot`s autonomy during the mission.

The robot works with devices built by American scientists from Caltech and NASA`s Jet Propulsion Laboratory.

Ccooperation between Łukasiewicz - PIAP specialists and US engineers was aimed at refining technologies that could be used during humanitarian and rescue operations, and perhaps in space missions, such as exploration of underground caves on the Moon.

The participation of the Polish robot in the DARPA competition was financed with a grant from the National Agency for Academic Exchange. (PAP)