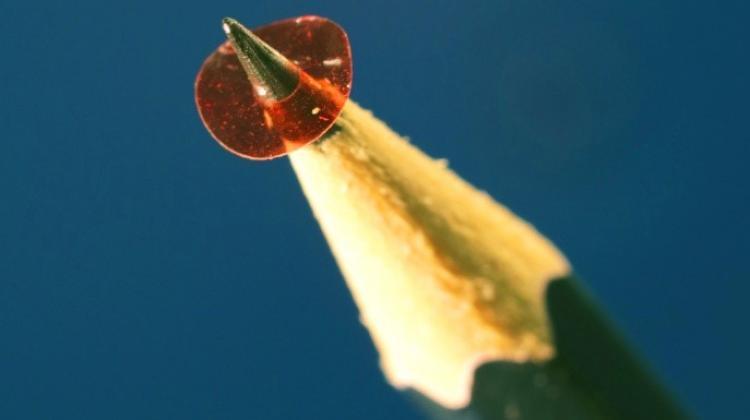 Photograph of a 5.5 mm micromotor rotor made of a properly oriented polymer, on a pencil tip. Source: Faculty of Physics, University of Warsaw, photo by Piotr Wasylczyk

A rotational micromotor powered directly by a beam of light has been developed by researchers from the Faculty of Physics of the University of Warsaw and colleagues from Poland and China.

The polymer ring which has a diameter of 5 millimetres is powered and controlled by a laser beam.

In a press statement, a spokesman from the Physics faculty said: “Rotational motion in nature is very rare, while our civilization is driven by it. We are able to build a variety of rotation engines, which usually consist of many parts, which hinders their miniaturization. However, there is a group of materials that allow for the construction of small, moving devices: liquid crystal elastomers (LCE).”

Liquid crystal elastomers are smart materials that can quickly and reversibly change shape, for example when they are illuminated. Due to proper arrangement (orientation) of elastomer particles, element deformation can be programmed. This enables remote powering and control of executive mechanisms and robots with light.

Research on such elastomers has focused mainly on designing the shape and manner of deformation of elements (e.g. shortening, bending). However, looking at LCE from a different angle has allowed researchers to develop a rotational micromotor.

Using photosensitive elastomer technology, the researchers in cooperation the Institute of Technical Physics of the Military University of Technology in Warsaw and the Centre of Polymer and Carbon Materials of the Polish Academy of Sciences in Zabrze, built a micromotor that rotates thanks to wandering deformation of soft material, caused by a laser beam.

The illuminated part of the motor (rotor) has the shape of a ring with a diameter of 5 millimetres. Designing the appropriate orientation of elastomer molecules allows it to ensure stable operation of the micromotor or increase its rotational speed.

Dr. Klaudia Dradrach from the Laboratory of Photonic Nanostructures, said: “Despite the low rotational speed, about one revolution per minute, our motor allows us to look from a different angle at micromechanics of smart soft materials and their potential applications.”

She added that the idea is inspired by a piezoelectric motor, often used in photographic lenses.

The repeatable method of producing deformable miniature elements from LCEs was developed thanks to the support of scientists from the Centre of Polymer and Carbon Materials PAS and the Military University of Technology.

Doctoral students from the Faculty of Physics, University of Warsaw, among others Mikołaj Rogóż and Przemysław Grabowski, participated in the research project.

They previously demonstrated a light-powered snail robot that moved like its living counterparts. They are now convinced that new smart materials combined with innovative methods of producing miniature parts will allow for the construction of further miniature elements and drives. They are working on light-controlled microtools and long-range linear actuators.

Research on soft microrobots and polymer executive mechanisms is funded by the National Science Centre and Ministry of Science and Higher Education under the "Diamond Grant", the Ministry of National Defence and a research program of the Suzhou University.