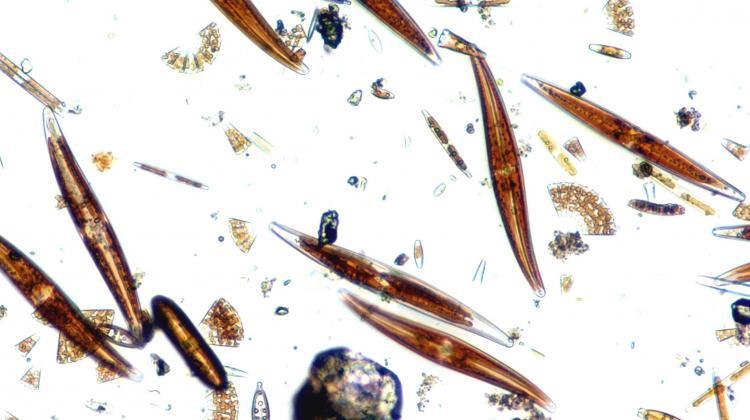 A cluster of 'live' diatoms under a light microscope. Credit: University of Lodz

The analysis of diatoms, a group of algae found in oceans, waterways and soil, could help police investigating deaths.

The examination of diatoms can help in determining the circumstances and location in the event of drowning and can reveal whether third parties were present at the scene as they leave a trace on clothing, footwear and car tires.

Now, methods of using diatoms in forensic science are being perfected by the Police Training Centre in Legionowo in cooperation with the University of Lodz and the Medical University of Warsaw.

Dr. Joanna Żelazna-Wieczorek, head of Department of Algology and Mycology at the University of Lodz said: “The forensic procedure, used since the end of the 19th century, in which diatoms can be used, is the diatom test performed as an auxiliary test to confirm or exclude drowning as a cause of death. In this case, internal organs (including kidneys, bone marrow) are tested for the presence of diatoms.”

The cooperation between the Lodz University’s Department of Algology and Mycology, the Police Training Centre in Legionowo and the Department of Forensic Medicine at the Medical University of Warsaw also includes research work and scientific publications.

Dr. Żelazna-Wieczorek said that because the diatoms retain diagnostic features even after the cell dies and is resistant to physical and chemical environmental factors, it is possible “to identify diatoms in both contemporary material from the environment and material secured as evidence, even after many years.”

Cooperation between scientists and investigators has been going on since 2018.