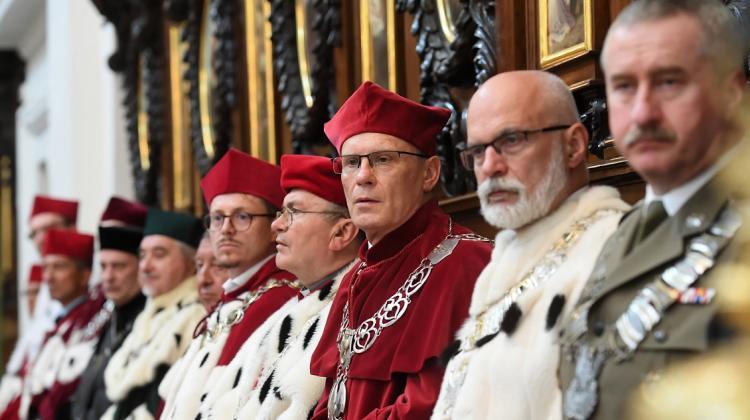 A Toruń sociologist who studied rectors at high-profile universities says there are not enough women in the role.

Dr. Anna Pokorska and her team from the Department of Higher Education and Science at the Nicolaus Copernicus University in Toruń found that not a single woman is currently a rector. It was not much better in previous terms.

In Poland, rectors of public academic schools are usually men over the age of 50 with above-average scientific achievements. The rector is more than a superior: it’s a symbol of tradition, values and standards of the university.

Dr. Pokorska described this as being “exceptional” in Europe.

For comparison, women are rectors of 34 out of the top 200 universities in the world included in THE World University Ranking 2019.

The lack of women in the group of rectors, Dr. Pokorska says, does not result from formal restrictions or differences in the quality of work between the sexes. She said: “There are many hard-working women in the managerial staff of universities. They have the competence and preparation that would allow them to run a university. Still, few of them reach the highest position.”

The team found, however, that there is a higher percentage of women in lower management positions. Dr. Pokorska calculates that at the universities they studied, between 2016-2020, 27% vice-rectors were women, as well as 24% deans and 44% deputy deans

DOES THE LEADER HAVE TO BE A MAN?

She said: “There is something that stops women. In my opinion, it is university organizational culture that is not gender neutral. Universities are fundamentally male.”

She explains that rector is not only a position, but above all a symbol of the university`s tradition, values and standards. “Model femininity is not consistent with the constructed university leader archetype. For this reason, many women end their careers in university management structures in a vice-rector position. They are convinced that the university is not ready for a female rector, and participation in the rector election will require either fighting with deep-rooted male rituals or adapting to them.”

She added: “An important factor is also the +think leader - think male+ syndrome. When we think about who a leader is, the first thing we associate that with is a man. This stereotype is rooted deep in many people. This applies not only to the academic world, but also business institutions.”

UNIVERSITIES MUST CHANGE. DO RECTORS?

“The fact that rectors are mainly men in their fifties shows that universities are conservative institutions,” says Dr. Pokorska.

She explains that the last 30 years in Poland’s higher education system has been a period of turbulence. There was a lot of talk about the need for universities to reform and look for new solutions, including organizational ones, to meet the requirements of research quality, internationalisation and interdisciplinarity.

“It seemed that it would be reflected in the diversity of profiles of people who are elected as rectors. Meanwhile, this profile has remained unchanged for years. And that means that the vision of who a university leader should be is still an area subject to restrictive standards, and it is symbolic.”

HOW TO SUPPORT WOMEN?

Asked if more women could be encouraged to apply for the position of rector, Dr. Pokorska says that it is not that simple. “Whether or not you run for a rector position often depends not only on an individual decision, but also on many other factors. First of all, the course of your career. You don`t become a leader overnight. You become a leader over years. On one hand, it requires the perception of oneself as a leader, on the other being perceived as one by others.”

She adds that women rarely categorize themselves as leaders, also because the institutional environment in which they function, i.e. the university, is not conducive to others perceiving them as leaders because they do not fit into the university archetype of leader.

She said: “Women at universities are primarily experts in a specific field.

“If something were to encourage women or cause the situation to change, it would have to be a systemic solution, or at least a discussion about who may be a rector. The new law is a good opportunity for such a discussion.”

According to Pokorska, a broad discussion about what the role and function of the rector would be a good idea. “Maybe then the idea of who the rector should be would be broadened. And thus more people would have a chance to fit into the new model.”

In autumn 2020, new rectors will be elected for the 2020-2023 term at all public universities in Poland. According to the new regulations (introduced by the new Law on Higher Education and Science), new rectors will have greater freedom in managing the university. Candidates in rector elections can be proposed by university boards.