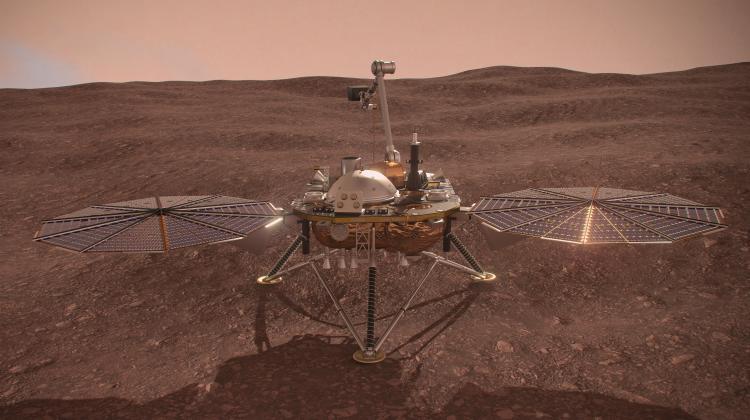 Despite suffering a number of problems and drawbacks, Poland’s contribution to the Mars drilling ‘Mole’ is functioning well, says the firm behind the project.

Despite suffering a number of problems and drawbacks, Poland’s contribution to the Mars drilling ‘Mole’ is functioning well, says the firm behind the project.

In November last year, Warsaw-based space company Astronika sent its hammering mole to the red planet as part of NASA’s Insight mission to drill five-metres into the surface.

The main purpose of the mission is to obtain information about the internal structure of the Red Planet and its current geological activity.

The sophisticated Polish-built part of the penetrator - the hammering mechanism known as Kret HP3 (Kret means 'mole' in Polish) which enables the device to penetrate the surface of Mars, was planned to drill itself under the surface and reveal just how much heat is flowing out of the interior of the planet.

Designed and built by Warsaw-based space company Astronika, the hammering mechanism of the Kret is intended to journey deeper into Mars than any instrument ever built for space exploration after barrelling into the Martian atmosphere at speeds of 12,300 mph (19,800 km/h).

But now the mission has run into problems because of ‘dust’ lying on the surface.

Since February, NASA has been reporting on social media that the Kret can't break through the outer layer of the Red Planet.

Mechanical engineer Ewelina Ryszawa from Astronika, who co-coordinated the design of the driving mechanism, told PAP: "It is true that the HP3 Penetrator has problems burrowing down to the appropriate depth under the surface of Mars.”

with a 20-centimetre layer of regolith (dust) which is much thicker than previously thought, and a serious obstacle to the proper functioning of the mechanism.

Ryszawa said that breaking through this layer is difficult for the penetrator, because while burrowing, the regolith does not scatter around it. The hole made by Kret is much larger than the diameter of the penetrator, therefore the friction needed for further penetration is insufficient.

NASA engineer involved in the InSight mission Troy Hudson told PAP that the Kret mechanism was adapted to initially penetrate through a layer of loose sand because that was what scientists had observed in other places on Mars, where probes had previously landed. Kret and the mechanisms inside it appear to be working properly, the problem is Mars, he pointed out. He added that data from the penetrator were flowing to NASA without problems.

According to Ryszawa, the part of the penetrator made by Astronika works flawlessly. The mechanism has already made several thousand hits and there are no signs of wear.

She said: ”If the structure of regolith on Mars was as assumed, the penetrator would probably be close to the 5 m threshold below the surface of Mars. During tests, several thousand hits were enough to burrow down to the desired depth.”

She added that the thickness of the top regolith layer was a big surprise for those involved in the mission. "We still have many secrets to discover on Mars, and that's why missions like InSight are needed. This is certainly not the end of burrowing attempts, work on resolving the problem continues and we believe that we will be able to burrow down a little deeper.”

On November 21, NASA reported that the Kret slowly burrowed down into the surface of Mars by about 3.2 cm. An arm was applied to the penetrator, which gave it the friction necessary to penetrate. Hudson added that this technique would be used by NASA until the penetrator completely penetrates the regolith. Currently, NASA is developing another, new method to allow the Kret to burrow down to a depth of 3-5 m, he told PAP.