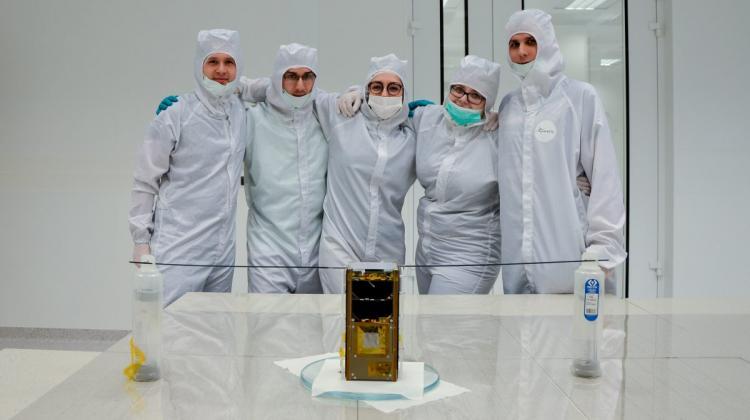 Student satellite PW-Sat2 has been operating in space for one year during which time it has sent over 700 photos and performed nearly 50 tests and experiments.

Launched on December 3, 2018 from the Vandenberg military base in California, the main goal of the mission was to test the deorbitation system, which will allow for faster removal of the satellite from orbit, and in the future help solve the problem of space debris, objects "polluting" the Earth's orbit.

After opening the deorbitation sail, the PW-Sat2 satellite was supposed to remain in orbit for no more than 2.3 years, but this time has now been extended to 2.5 years. Although opening the sail was successful and the first images from the on-board cameras were received on the same day, after about three days, tears on the sail appeared and over time covered about 30-35 percent of its surface. This reduced its effectiveness. The expected lifetime - 2.5 years - is still much less than 15-20 years that a satellite of a similar size without a sail would spend in orbit.

Giving an update on the satellite’s progress, Dominik Roszkowski, vice-coordinator of the PW-Sat2 project posted on the project website: "The satellite built by the members of the Students Space Association remains operational and is still in orbit.

"To date, ground station operators have established over 2,300 communication sessions with the satellite, transmitting commands, results of experiments, as well as more than 700 images taken with two on-board cameras. The community of radio amateurs from Poland and the world also joined, receiving data from PW-Sat2 and passing it on to the team.”

Over the past year, PW-Sat2 has conducted research into the radiation environment in low Earth orbit, and completed 26 experiments of the absorbed dose of ionizing radiation sensor RadFET. It has also conducted 22 tests of the experimental Sun sensor SunS, which determines the orientation of the satellite relative to the Sun.

Now, Warsaw University of Technology students have begun working on a new satellite.

Expected to be slightly larger than its predecessor more details about the PW-Sat3’s mission are expected next year.