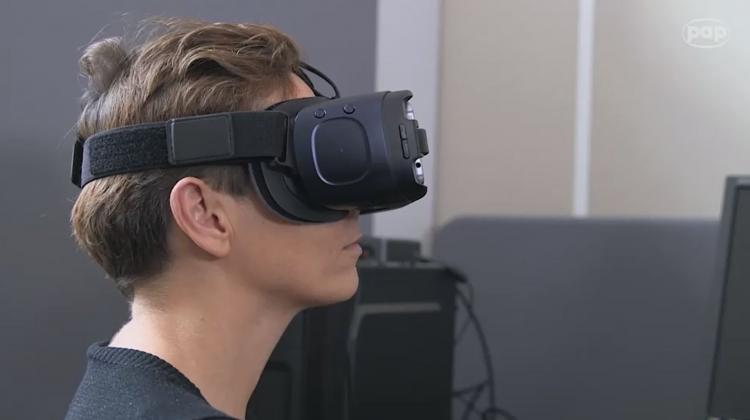 Wrocław scientists have found that virtual reality reduces short-term pain in children by up to 59 percent during the blood drawing procedure.

Dr. Marcin Czub from the Institute of Psychology at the University of Wrocław, who has been researching the phenomena for several years, said: "In a study at the nephrology department, it was possible to reduce pain in children by 59 percent, stress by over 70 percent. These results are in the upper limits of what other researchers manage to achieve by means of distraction," Czub said.

He added that scientists will soon carry out a project on a wide patient population in several hospitals, including hospitals in Poland, Norway, Spain and Turkey. "The fact that short-term pain can be relieved by distracting it is common knowledge. We want to see if distraction using VR will reduce pain more effectively than other methods," he said.

The study assumes that children will receive a task in virtual reality and on a phone screen to see how specific the pain reduction effect is for VR. "We want to very accurately isolate this effect of virtual reality," the scientist said.

The feeling of short-term pain is a complicated process, consisting of two components, sensual and emotional, which has the characteristics of fear, anxiety, insecurity, helplessness.

Dr Czub said: "These components are always coupled and by modifying one of them we can influence the other. If we can reduce this emotional dimension, we will affect the overall perception of pain and this pain will become +easier+ to bear, less burdensome. That is how it works.

"Pain is a very attention-absorbing experience, because it is important from the perspective of the body, it helps you protect it. However, if, for example, we suggest to our body that this pain is not that important, because we can focus on something else, then with the help of this mechanism we can reduce it.”

The scientists decided to use virtual reality as a method of distraction because it engages many senses at the same time and "thus can absorb the subject more into a different context than this context of pain."

Scientists have been researching for several years which VR images effectively reduce pain. "Healthy people, students, kept their hands in cold water, and we showed them various types of virtual environments controlled by us, which differed in a selected factor, for example control method, involvement, dynamics, and we watched how it would affect pain tolerance," he said.

These studies showed that the way the game was controlled and the level of body involvement significantly affected pain awareness. "Even if it was the same game, but controlled with the movement of the hand, not with a mouse, this analgesic effect was greater," he says and notes that the study was experimental.

The scientists` next step was to design a game that would strongly engage attention but not require special physical activity to control it, so that it would not be a problem for medical staff during medical procedures.

"In the game, several objects move in virtual space, they must be simultaneously tracked and their position remembered. Then the player selects their place by directing the gaze in the right direction. Controlling the game consists only in turning the head to the right or left, up or down. The game is also constructed on the basis of psychological research on the functioning of attention, so as to maximally engage attention processes," he says. He adds that two experiments carried out so far show that this solution works.

Based on this programmed virtual reality, scientists will conduct a study on a wide, culturally diverse population of small patients.

Czub also notes that VR will reduce short-term pain, but not chronic pain, which affects 20 percent of the adult population of Western societies. He explains that this type of pain is governed by different laws: "Pain perception is generated in the central nervous system, in the brain, and it is not enough to turn off the pain signals on the periphery of the body to stop feeling pain."