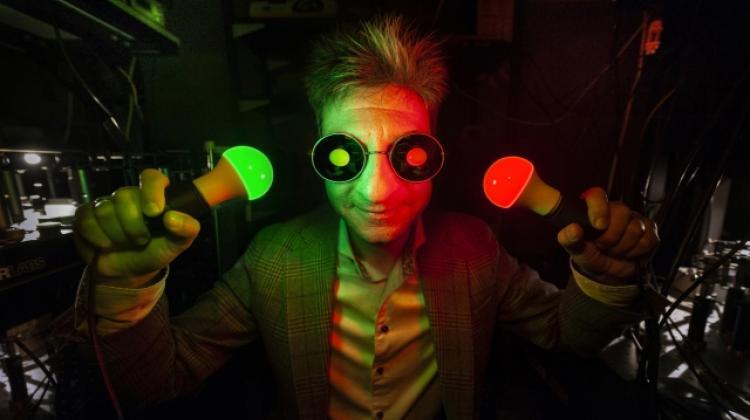 A team of scientists have developed a new device for spotting retinal diseases by using laser light to check how much infrared light patients can see.

People are able to see short flashes of laser light in the infrared range, a group of scientists including mainly Polish researchers explained sometime ago. Now, based on this discovery, they looking to improve the diagnosis of retinal diseases.

According to research carried out a few years ago by an international team including Polish researchers, people see super-short laser pulses in the near-infrared range. Such flashes - depending on the wavelength used in the experiment - may appear green or blue, for example.

This became known as two-photon vision. Based on this discovery, researchers have now developed a device which, they hope, will allow for earlier detection of retinal functional changes, mainly age-related macular degeneration, and help better understand the vision process. These are the goals of the new IRA (International Research Agenda) working to improve the eyesight of older people.

Two-photon vision consists in the retina receiving a portion of energy twice lower than the minimum required for the reaction of photosensitive cells, but very concentrated in time and space. And if the impulse repeats itself, the person sees it as if the energy were twice as high.

In a press release sent to PAP, scientists from the Institute of Physical Chemistry PAS explained why the eye is sometimes able to see infrared light. "It`s a bit like throwing small plasticine balls at the board twice, hitting the same place. The imprints of both balls on the board will merge into one larger, visible imprint. (...) That is what happens in the quantum world, the condition is that you have to throw these balls close enough and in a short time, so that they basically stick together into larger dots. Physicists call this the optical non-linear effect. Such effects are known for many materials, but it is not obvious that they can occur for doses that are safe, e.g. for the eye," they write.

With age or at the beginning of a disease, this effect is seen less clearly. Hence the idea for a new generation of microperimetry equipment used to check whether we see and what we see at various points on the retina. Researchers believe that the two-photon effect could allow to improve the sensitivity of such devices, or test the threshold of infrared light vision.

"Thanks to the company AM2M, a Nicolaus Copernicus University spin-off, we have already started to produce new microperimeters. There are currently three such devices abroad and the fourth, fifth and sixth in Poland. In Heidelberg they are already routinely used to examine patients," says Prof. Wojtkowski.

According to scientists at the Institute of Physical Chemistry PAS, another reason the new discovery and the devices created on its basis are beneficial is that with age the human eye becomes more and more cloudy and scatters light waves more. Meanwhile, physics principle says that the longer the wave, the less it dissipates. Infrared will allow to more thoroughly examine the fundus also in people with advanced cataracts or with floaters in the vitreous.

"As part of our IRA we will try to objectify this process, i.e. move from subjective perimetry to objective ophthalmoscopy. We will use holographic optical tomography. We will analyse the functional signals on a similar principle as in tympanometry. This will allow us to determine whether the patients see and what they see, without feedback from them, even when they are unconscious or cannot communicate, e.g. after a stroke," the professor says.

"Thanks to the work of Dr. Katarzyna Komar, we have noticed something else that we cannot explain yet. Namely, infrared vision differs from normal vision. It turns out that cone cells respond differently than rod cells; they seem to be more sensitive. Now we are trying to understand why this happens," adds Prof. Wojtkowski.

It is assumed that visible light that a human can see is the radiation of wavelengths between 380 nm (violet light) and 780 nm (red light). Near infrared radiation is radiation at higher wavelengths: between 780 and 1500 nm.

The research is being carried out by scientists from the Institute of Physical Chemistry of the Polish Academy of Sciences in Warsaw, the Nicolaus Copernicus University in Toruń, the Baltic Institute of Technology in Gdynia and American colleagues.